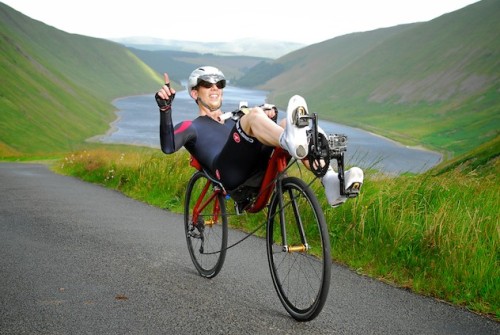 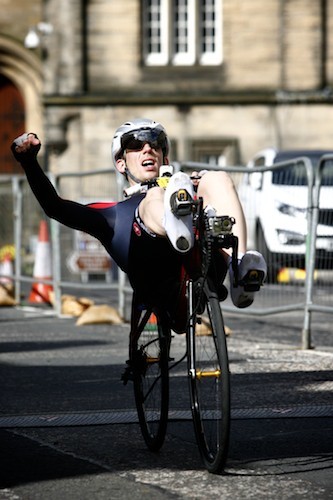 Headcam footage of the first half of the 2016 Etape Caledonia (I finished in 21st place).

This year I rode the Etape Caledonia as a warm-up to get me training early in the year (if you like, a B event ahead of August’s Tour o’ the Borders).

I finished in 21st place, five minutes off the pace, which wasn’t awful for the first ride of the year. The High Baron was great as usual, mainly held up by traffic in the first two thirds of the ride, as can be seen on the video.

I’ll write a longer report separately, but I did get a headcam rigged up to the front of the bike which recorded roughly the first half of the ride before the batteries died:

After the video ends, there’s one climb up Schiehallion (not as long as you’d expect, nor as steep – it took me just over eight minutes at 270W), a bit of descent then a pretty dull main road finish, barring a slightly lumpy section immediately before the line.

I was pleased to ride the Etape just to see what it was like, and it did prove valuable incentive ahead of the Touro in August, but I have to say that the quality of the riding isn’t great with so many others on the course. I did a recon ride a few weeks before and was only passed by a handful of cars, but otherwise had it all to myself!

Little did I suspect I would be fording a river sweeping knee-deep across the road, while the wind made it almost impossible to stand…

I knew the weather was going to be taxing before we even got the start line on Sunday’s now-legendary Tour o’ the Borders. Although there was no question of missing out on a great day on the bike, little did I suspect I would soon be fording a flooding river sweeping knee-deep across the road while the wind conspired to make it almost impossible to stand! 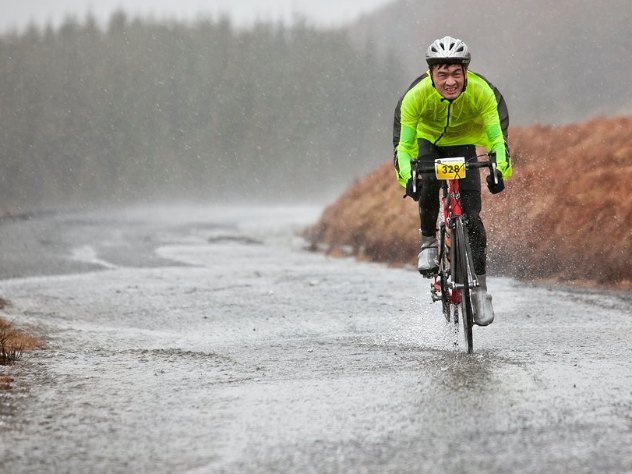 The event was based at Peebles High School which provided welcome shelter from the rain, and of course the canteen was doing a roaring trade in coffee and bacon rolls! The organisation of this sportive was first class – it was the work of moments to register, get my pack of goodies and ride essentials- race number and timing chip. No queues!

As my first sportive, I had a few concerns about the type of riders or reception we might meet but the whole day was very friendly. The Tour o’ the Borders did have plenty of roadies but there was no shortage of normal (ish!) looking people – flat bars, tandems, recumbents welcome! I even saw one chap with his helmet on back to front, which is always reassuring (I’m sure someone told him before he tried to start the route…)

The atmosphere was great (even if, on the course, it’s been suggested there was more of a “blitz spirit”)… we’ll definitely be back next year!

The Tour o’ the Borders has two routes, long and short (although at 50 and 70 miles, the main thing that separates them is actually the number of climbs!)

Each takes in the long winch over Paddy Slacks (in both directions), the steady grind up Berry Bush, and the lovely Witchy Knowe climb from Kirkhope back over to the Yarrow valley. In addition, the long route throws in a couple of climbs between the Ettrick valley and Ashkirk as well as “the Wall” which rears up between Ashkirk and the feed stop at Kirkhope. 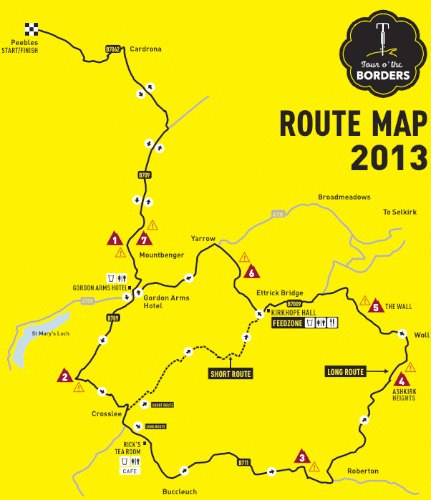 Whichever option you choose, the roads are near deserted (next year they will actually be closed) and the surfaces are OK (compared with, say, Edinburgh’s roads!) – a great day out is all but guaranteed…

Not that the hills would be the main challenge this year… 🙂

Out on the course

9am came around and it was still raining buckets with a fierce wind as we regretfully left the warmth of the canteen. Lined up in the starting paddock together with a group on normal bikes, the wind was already strong enough in the car park that I had to unclip to keep myself upright!

Once out on the course, the sheltered few miles to Traquair had me lulled into a false sense of security. When we turned onto Paddy Slacks, the wind was absolutely hammering through the pass accompanied by stinging hail.

At this point the Baron started to shine and I picked off an endless stream of riders on the ascent, despite keeping my power low. The most challenging thing was negotiating the huge amount of debris that had been washed onto the road (while trying not to get blown off it!), as well as the steady stream of abandoning riders coming the other way.

I actually had to pedal downhill to the Gordon Arms! 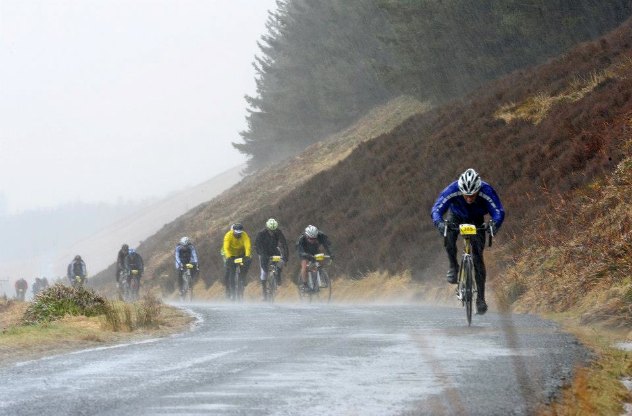 Berry Bush was probably the worst headwind of the ride – totally exposed and relentless. It took twenty minutes to climb averaging just 10mph and often had me wishing my inner ring was a bit smaller than 39t!

Surprisingly few riders were working together, although just before the summit a group formed that came through and gave me a welcome boost to the top (thanks!) 🙂

The respite on the descent into the Ettrick valley was delicious. The roads here are absolutely fantastic – narrow and twisting but not so much that you’re worried about what might be coming the other way… just perfect for bikes.

However, with only two of the route’s seven climbs completed we came across a marshal flagging riders down to warn of flash-flooding on the long route, and recommending we cut it short. As an audax rider I’m used to a bit of weather and decided to push on, but was admittedly unprepared for the sight of the river Ettrick bursting over its banks and running across the road… did this put paid to my chances of getting a time on the long course? 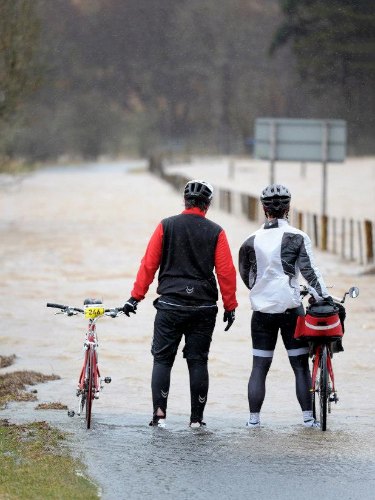 In a past life I used to kayak these rivers for fun (preferably with fewer fences though) so I decided to go for it.

Fortunately it wasn’t too deep to stand – it only came up to knee height – but even so I had to use the bike as a rolling tripod to let me lean into the wind and current. And I’d been thinking that sportives were a soft option – how wrong! 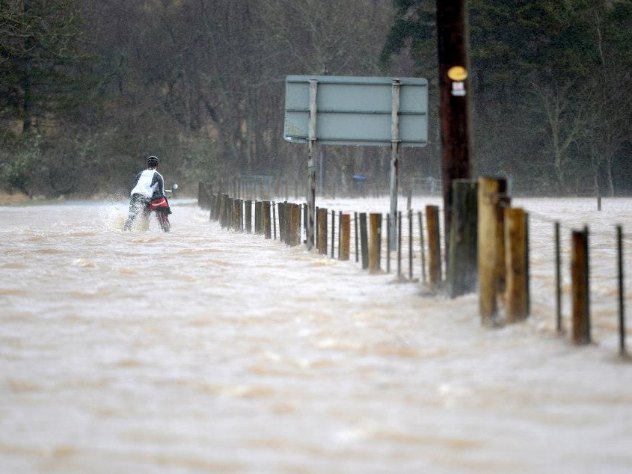 As the air temperature wasn’t too low, I warmed up immediately on the other side, and started to enjoy the huge tailwind which swept me around that half of the course. I didn’t bother pedalling above 20mph so needless to say I didn’t do much pedalling until I hit the short climb from Alemoor reservoir, just before the turnoff to Ashkirk.

The road to Ashkirk passes over a high moor and was extremely fast despite the conditions – by this time it seemed that I’d been going for about an hour without really having to pedal. From Ashkirk the riding got tough again as I turned back into the wind and hit “the Wall”. This climb was too steep for my 39t inner ring given the conditions, with one ramp at 1:6 (over 15%). Still, the rain was letting up now and this made things much more cheerful.

Course highlight – a tree had fallen across the road but the branches were hacked away to allow you to ride underneath (not by the organisers, I’m sure!).

Around this time I started to pick up the slower riders who had made it through before the flood, although none of them were going as fast, so I missed out on any sort of draft from here to the finish.

The feed stop in Ettrickbridge was fantastic – a full range of soup, sweet and savoury food at the foot of the event’s toughest climb and shelter from the rain too! Thanks so much to all the locals who were manning this…

By this time, riders were being rescued from the flooding by tractor (!): 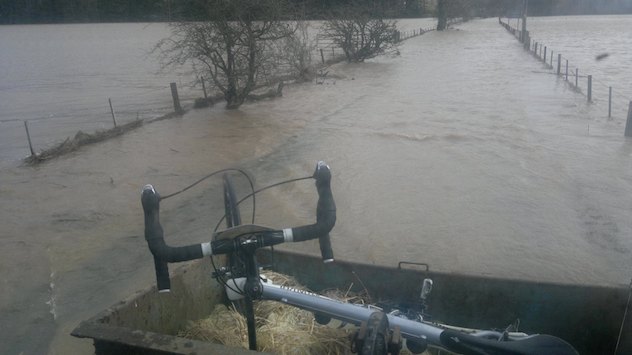 The climb up Witchy Knowe was a steady grind and I was finally papped by a photographer at the summit (I haven’t seen any of these photos online though, at all?) before the streaking descent to the Yarrow was testing my brakes.

The sun was out now and the ride up to the Gordon Arms was refreshing despite the headwind – I was steadily passing riders from the short course now which kept me motivated. Birling up Paddy Slacks with a gale at your back is fantastic, and the descent seems to go on for an eternity!

Last but not least was the return from Traquair to Peebles – I’d hit my stride now and averaged 20mph (the wind was doing funny things) right through to the finish. There were a couple of huge puddles to hammer through – again one had photographers at it, although I haven’t seen any shots from there either.

Then it was on to welcome food and dry clothes. 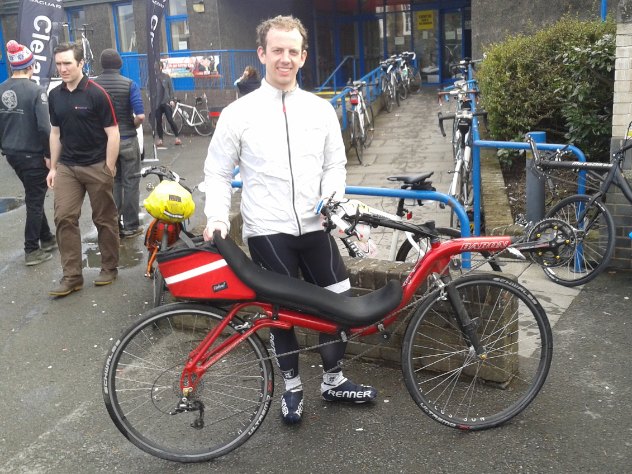 270 finished the long course and 360 the short course – an impressive number considering the conditions. Some went round the long course in 3:40 which is quite incredible given the wind (3:20 would be evens!)

I was 21st in my category. No doubt complemented quite a lot by the fact that few riders were foolish enough to follow me through the river… although my Garmin says I lost ten finishing places due to the delay, so who knows…

Next year with closed roads and (hopefully) better weather we’ll see what’s what! 😛

Don’t miss this event in 2014. Friendly, well organised, and great roads. It’s going to be fantastic.