Revamp of key junction in Meadows park is a step in the right direction, but lamentably fails to address key safety concerns

Video survey suggests more should have been done

Considering that the council themselves described this work as “relatively minor”, the improvements delivered are in some respects substantial. Nevertheless, the council has missed an opportunity to deliver a really significant improvement by pacifying the last 30mph crossing which poses a barrier to safe pedestrian and cycling journeys through the park.

This is doubly unfortunate as last year saw the closure of nearby Meadow Place – a grim rat run – with a cheap set of bollards, providing pedestrians and cyclists with a huge increase in safety at almost no cost (notably, no increase in congestion has been measured).

The failure to protect the crossing is particularly regrettable as the junction is so close to the Sick Kids hospital and on a route busy with school children. (I wrote recently about the sadly predictable lack of a temporary crossing when the works were put in place – and although doubtless just an unhappy coincidence, at least one ambulence was called for a child while the works were underway). 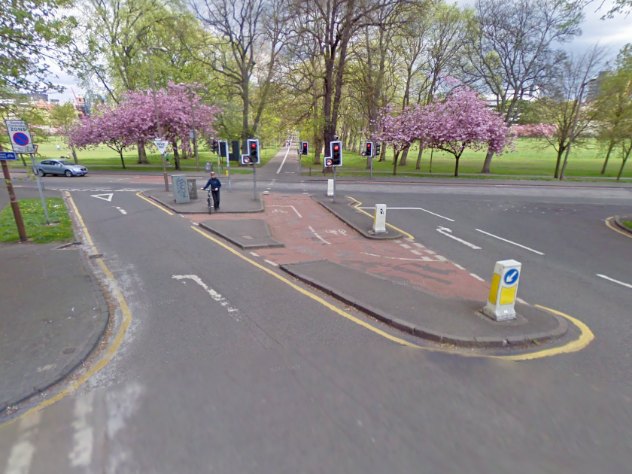 At left, you can see the contentious high-speed slip road that allows vehicles turning left from Argyle Place to bomb past multiple crossing points.

Traffic turning left from Argyle Place enjoys a dedicated slip road which is not light controlled – either to protect pedestrians/cyclists crossing from South Meadow Walk or in the interests of westbound traffic on Melville Drive. This is the crux of the problem with both old and new designs.

The junction has always been considered a bit of a joke, and was routinely circumvented, with many cyclists riding directly onto Argyle Place despite the green-signalled oncoming traffic, or cutting across pedestrians directly onto Melville Drive to avoid it.

Look at the tortuous attempt to link South Meadow Walk (centre, between the trees) with Middle Meadow Walk (right of image) and Argyle Place (left of image) using farcical gullies: 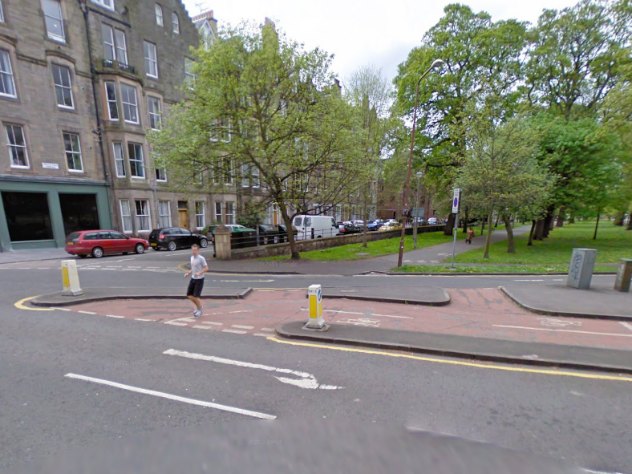 The new layout significantly improves access between Middle Meadow Walk and South Meadow Walk in terms of physical layout. This is one of the two stand-out improvements to the revamp (this and following photos are were shot by Chris Hill during the works – I’ll update with pics of the finished article shortly): 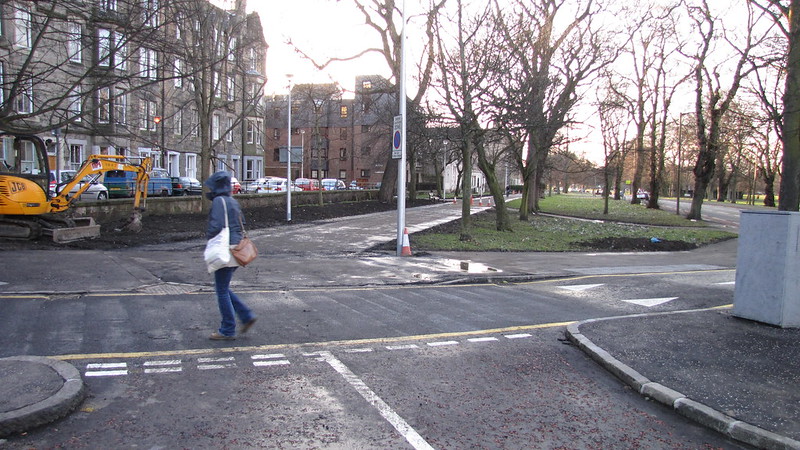 Unfortunately the revamp only slightly addresses long-standing safety concerns around the unsignalled left filter lane onto Middle Meadow Walk. If you want to get onto the island from South Meadow Walk on this side you still just have to cross the unsignalled traffic flow.

Under the new layout, a raised table has been added at the pedestrian crossing closest to Melville Drive. Video monitoring of the junction suggests this is having a significant moderating effect on vehicle speeds by the time they pass the give way line: However, it leaves the obvious question – out of the two pedestrian crossings and one cycle crossing on the slip road, why is the speed table not extended to cover all three (or at least both the pedestrian crossings, leaving cyclists to ride over at ground level)?

It seems a significant investment has been made fitting drop kerbs and tactile paving to the South Meadow Walk pedestrian crossing when it could hardly have added significant cost to use the existing kerb line and pour a second tarmac table, thus moderating vehicle speeds on the approach.

The prominent “speed up to 30mph” signage right before the unsignalled crossings doesn’t exactly send out the best message either.

Not clear that more radical changes were adequately modelled

Video monitoring has taken place during the peak morning period (7:30am – 8:45am) to help understand patterns of use.

A total of 637 conflicting junction movements were observed, the proportion of users being as follows:

With fewer than one car per minute using the slip lane during rush hour, everyone is asking the obvious question: why wasn’t something more fundamental done about the slip to get around the whole problem of vehicles bombing down to Melville Drive across three pedestrian/cycle crossings?

This video still shows six cyclists, five pedestrians and no cars using the Argyle Place junction. Given that motor vehicles make up just 1/6th of junction movements, why doesn’t the slip road have to give way at the cycle path, instead of vice-versa? Too expensive? 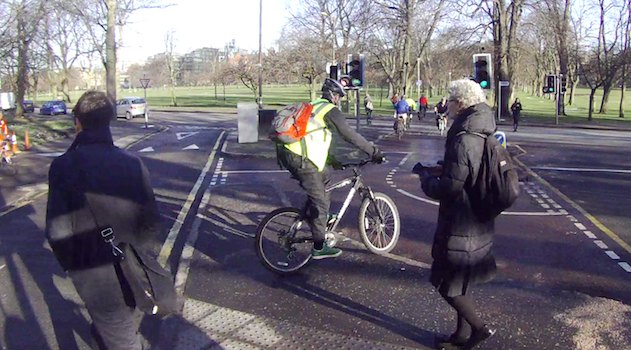 Why are a tiny proportion of motor vehicle movements being prioritised over pedestrian and cyclist safety?

The existing light phase for Argyle Place (which controls traffic turning right onto Melville Drive) could easily have been extended to cover the slip road for traffic turning left.

No timing changes would be required as the number of vehicles is small – just 68 private vehicles between 7:30 and 8:45am on a weekday, less than one per minute. The average period between green lights for Argyle Place was also monitored for the final 30 minutes of that period, and is 23.8 seconds (never more than 28 seconds), meaning that on average in rush hour there would be fewer than one extra car queueing at the lights if they were extended to cover the slip road.

How can we reconcile this with:

Consideration was also given to removal of the left-turn lane from Argyle Place onto Melville Drive, however this would have resulted in the need to reduce the crossing time for pedestrians and cyclists. As such, a decision was taken to retain the left-turn facility to ensure maximum crossing time for pedestrians and cyclists to/from Middle Meadow Walk.

Even if the Argyle Place light phase had to be slightly longer (very doubtful, as fewer than one extra vehicle on average would be queuing there), is it credible that would significantly impact through traffic on Melville Drive anyway?

How it could have been

Regular readers will know that I like to turn my hand to random things, in this case hacking the council’s “Argyll Place at Melville Drive : General Arrangement” documentation.

There are text links below this image over which you can hover to view alternative plans including a second crossing table, and one including an extended light phase. 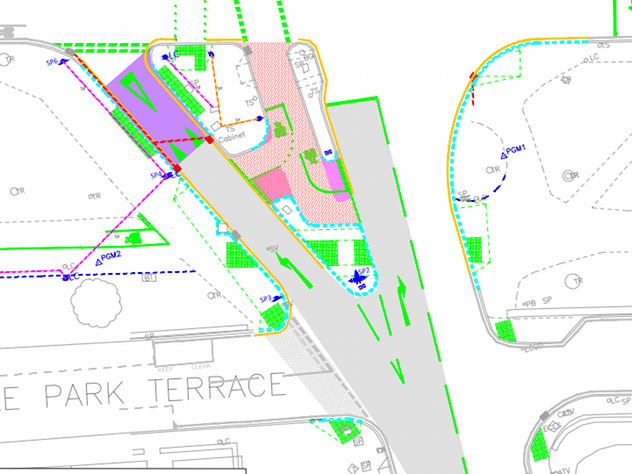 If any real traffic planners read this, I hope you appreciate that I figured out how to wire up the new light in the third image. 🙂

Admittedly traffic management is a game anyone can play and a profession for fewer. But this really does leave a lot of people asking whether the cost of digging in a single new traffic light and painting a white line across the slip road, or building a second table instead of installing drop kerbs, could really have been so great?

What guidance was given when the replacement design was commissioned?

Ironically, rush hour looks to be one of the safest times to use the new junction, because traffic on Melville Drive is so heavy that cars can only exit the slip road when the pedestrian crossing phase goes on. In turn this allows pedestrians to cross from South Meadow Walk to the island without worrying about moving vehicles.

All-in-all this is a step in the right direction, but it’s unfortunate to see the leadership that was provided over nearby Meadow Place (by the previous administration) has not been continued.

If this was a school report, it would be “must try harder”.

Are you a user of Middle or South Meadow Walks? Got an opinion on the new junction layout? Drop me a comment below…

This really begs the question: who in Edinburgh Council just doesn’t get it? If someone was knocked down trying to cross Melville Drive would they take responsibility?

Great post from Wilmington’s Cow over on Blipfoto just now about how depressingly far we are from being a “model” cycling city here in Edinburgh.

So, the junction is closed for redesign, so far so normal. Except, on this busy crossing, while they put in place big yellow ‘diversion’ signs for those in cars… Pedestrians and cyclists, the people for whom this is being redesigned, have the crossing switched off, and…. Nothing. No temporary crossing, just… Nothing. On one of the busiest roads in the city…. Nothing.

The fact that it took various people on a cycling forum to complain before even a temporary crossing was put in is frankly laughable. That they put it in then don’t provide any signs that it is in use (because it’s in a different location) is just ridiculous.

To be fair, I suppose we might be an exemplary model of how to have a noisy, fume-filled, car-centric cycling city, but I somehow doubt that was the original intent!

It’s frankly rediculous that Middle Meadow Walk has been cut off with no provision for the crowds of cyclists and pedestrians to get over speeding Melville Road. For those not familiar with the area, Middle Meadow Walk is a major thoroughfare connecting central Edinburgh with Marchmont and the south side, including several schools and the Sick Kids hospital.

People are crossing anyway, of course, but dicing with death to do so. All for the want of a simple temporary crossing! The majestic irony of this whole situation is that the works are only in place to improve the junction for active travel, as it has a terrible layout for cyclists and pedestrians anyway.

Update: after councillors were badgered repeatedly by concerned citizens, a temporary crossing has finally been put in place… but further down the road with no diversion signs.

This really begs the question: who in Edinburgh Council just doesn’t get it? If someone was knocked down trying to cross Melville Drive would they take responsibility? After all, the alternatives are some distance away, and the park is big and dark. People aren’t just going to abort their journey because there’s a ‘crossing not in use’ sign up, especially if they’re trying to get to school or the Sick Kids.

For once you have to feel a bit of sympathy for the city’s councillors here. They can’t be expected to personally supervise every piece of works, yet they are ultimately responsible for the public’s wellbeing.

Hopefully some serious taking-to-task is going on behind the scenes, but…