A few short videos to underline the complete failure of Leith Walk and the council’s proposed changes.

If a picture paints a thousand words, hopefully a few short videos are worth a million to underline the complete failure of Leith Walk and the improvements that are needed viz. the council’s proposed changes.

“Cyclists can just use the bus lanes”

I wonder if someone at the Council imagines that the fact bus lanes are painted on Leith Walk somehow makes it a pleasant place to cycle. Nothing could be further from the truth, especially as even in rush hour, they are largely obstructed by parked vehicles:

The experience of cycling up the bottom part of Leith Walk is unpleasant enough to put 99% of the population off for good:

“A dab of paint on London Road roundabout, it will be safe and fun”

The current proposals feature no improvements at all north of London Road roundabout (the videos shown above). However, the multi-lane unsignalled London Road roundabout will be “vastly” improved by the addition of some painted white lines. Just imagine, if only there were a few dabs of paint here, your children could cycle to school unattended:

Yeah, whatever. If cyclists aren’t taken across (or around) this roundabout on a protected, segregated cycle track, it seems far-fetched to imagine that use of the street will increase at all, however pretty the rest of it may be.

“We’re going to let cyclists ride between roundabouts on a segregated track!”

The current design proposals do contain a bit of cycling infrastructure: a cycle track between London Road and Picardy Place roundabouts.

So, as long as you’re willing to take your life in your hands crossing the roundabout in the video above, you’ll be able to ride for a hundred meters or so in segregated comfort, before rejoining the road here:

Yes, you really will have to cycle across that (unless you want to risk going up Leith Street), even after the proposed redesign. Picardy Place for kids and grandmothers on bikes? Dream on!

“A dab of paint will fix Picardy Place anyway”

Here’s a video of me cycling home from work across Picardy Place. It’s extremely dangerous and it’s a flight of fancy to imagine anyone who was encouraged by a segregated cycle track on the rest of Leith Walk being able to use this at all:

This junction is horrendous for pedestrians too. It must be addressed by a complete redesign.

I ought to apologise for being so quiet on the Leith Walk consultation / redesign front.

Having seen the preliminary designs published at the tail end of last year and having been to the meatspace consultation event, I was frankly so disheartened that I couldn’t bring myself to comment in any depth.

It looked like it was going to be another “Quality Bike Corridor” episode, with large amounts of money and goodwill squandered for a very marginal improvement, little more than a reinstatement, and it really did seem that officials and councillors were not the least bit interested in making any visionary steps at all. 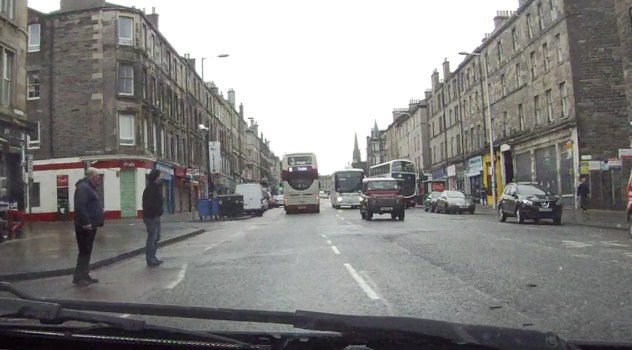 Of the £5.5m allocated, £3.2m was earmarked to resurface the road and £1.5m to re-flagstone the pavements, leaving just £800,000 for other interventions (based on a second hand breakdown – I’d welcome any correction).

As Edinburgh’s transport budget is just £20m, Londoners reading this should perhaps scale up to £500m to empathise with this level of waste.

However, we heard recently that the Council is to seek Sustrans funding to make improvements to cycling/walking on Leith Walk above and beyond the dubious efforts indicated in the preliminary plans.

With that in mind, I decided to sit down and grind something out after all.

What is wrong with Leith Walk?

As a daily user of the street I think I can sum this up pretty succinctly: it’s unpleasant.

We’re not just talking about cycling here. Leith Walk is enormously wide (in parts, perhaps a candidate for the widest street in Edinburgh?) but it consists entirely of signs and bins (on the pavement), rows of parked cars, a bus lane which is inevitably full of double parked cars and delivery vehicles, then 30mph+ “fast lanes” before a wide central reservation.

The junction layouts are as unfriendly as the rest of the street. It takes a horrendous amount of time to negotiate the area as a pedestrian, especially at the southern end where the two multi-lane unsignalled roundabouts (London Road and Picardy Place) demand lengthy detours or Spartan disregard for personal safety.

Leith Walk could easily be a thriving boulevard – it’s just a question of changing its primary purpose from a distributor expressway to a street where people are prioritised.

There are immediate benefits to be realised from slowing traffic down and shifting the emphasis towards pedestrians and cyclists – drastic reductions in noise, air pollution, hugely increased footfall for local businesses, just for a start.

On that last point – when people can’t easily cross the road, if they come to Leith Walk at all they are going to be inclined to stick to the side they’re on and neglect all the businesses opposite. Who wants to spend time on a four lane expressway of a street anyway?

Local business needs to be reassured and given leadership by a Council that isn’t afraid to reduce the amount of parking available on a 7-lane expressway to accommodate a modest cycle track. 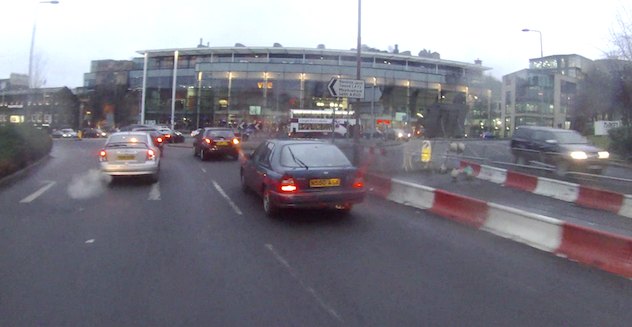 Over 50% of Leith households do not own a car. The question the council needs to answer is this: why does Leith “Walk” have such poor pavements and almost non-existent provision for cyclists, while a relatively small proportion of people in cars enjoy an eye-popping seven lanes-worth of space (two parking, two travel in each direction, plus central reservation) set aside for them?

The Council desperately needs to take this opportunity to learn from the disaster of the Quality Bike Corridor (and the contrasting success of infrastructure projects elsewhere, such as the amazing redesign of Poynton in England) to do the following things:

We’re now hearing that London is stepping up to the plate with massive investment in liveable, cycleable streets. They are going to focus on doing just a few things right rather than piecemeal and marginal improvements which have manifestly failed to turn Edinburgh into a model cycling city.

With over £4 returned from every £1 invested in cycling infrastructure to the NHS alone (forget about all the other benefits for residents, local business and pedestrians of a pleasant, liveable street) this really should be a no-brainer.