John Mills talks in depth about his Challenge Furai 26″ midracer…

John’s Nazca Fuego is a popular “Readers’ Bikes” entry, and I’m pleased to be able to add this article by John to the site, this time featuring his Challenge Furai — Dave.

Over the last few years I have owned and ridden a good few bents, from stick bikes to low racers. My first bike was a Nazca Fuego and I eventually went back to this model as it is, for me, a near perfect all-rounder.

The Furai also caught my eye and I did have a brief ride on a 24” all-rounder version. Later, I read Dave’s review of the Furai based on a very wet short tour in the Highlands. It came across as a bike with many similar qualities to the Fuego but with a bit less weight and a slightly higher seat. Intriguing.

Then last year David at Laidback told me about a 26” version he had taken as a trade in. I travelled up to view it, tried it and bought it. 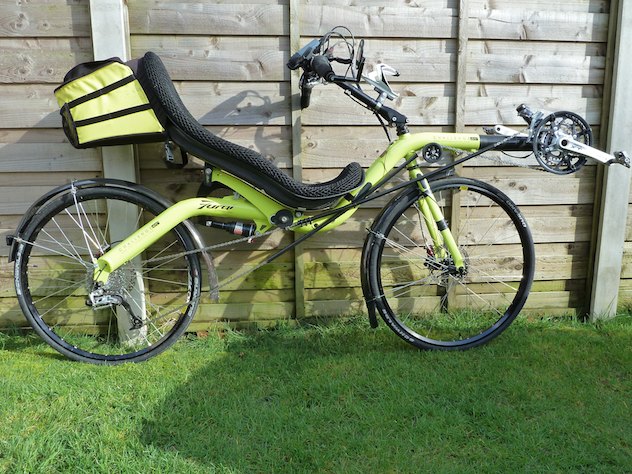 My bike started life, I believe, as a 24” model. Challenge supplied a replacement fork.

The bike is fitted with an Rock Shox air suspension and carbon boom. It is built using Avid Elixir hydraulic disc brakes, SRAM X9 rear mech, and twist grip controls. The supplied SL seat was too short for me so I approached Challenge directly about getting a Large carbon seat and the associated fittings. The process went smoothly enough and the seat arrived. There were no instructions so I set about it using my own judgement. The outcome is a seat sitting a little further forward than the SL seat. This seems to have benefited the handling (I’ll explain this later)

I made one or two changes. I substituted a pair of wheels comprising Shimano XT hubs and Mavic XC717 rims (a personal favourite), a SRAM PG990 9 speed cassette and fitted 28mm Schwalbe Durano tires. I lowered the gearing by fitting a Shimano XT 26/36/48 ATB chainset. I am using a Bacchetta Big Bag as a seat pack for stuff and a bottle cage is mounted on the stem. All the changes went smoothly and the finished bike, ready for the road with mudguards, bottle cages, computer, Ventisit and pedals came to approximately 14kg. All that remained was to wait for the blessed rain to stop!!

When I first rode the bike I felt what appeared to be a slight hint of wheel flop at low speeds. It disappeared at anything above walking pace. After I fitted the carbon seat this characteristic had vanished. Either I had dialled this out of my consciousness or the slight shift in weight distribution eliminated it.

Directional stability is excellent, yet it responds quickly to steering inputs. Changes of line feel secure with no feeling of under or over steer. Across cratered surfaces it holds its line well and the narrow tyres seem to cut through some of the muddy surfaces left from the winter storms.

Brakes, as you might expect, are superb with power and good modulation.

I have had no issues with the idlers. I wonder whether chain tubes (which are installed) prevent the chain leaping off? Perhaps chain length and therefore tension plays a part?

Some time ago I remember reading a number of posts on BROL forums concerned about the potential for heel strike on a Furai 24. It was some weeks after I got the bike that I remembered and looked up this thread. Up to that point I had not thought about or experienced heel strike. It certainly can occur (though there is no hard interference between cranks and wheel) but in practice it is a non-issue.

In Dave’s report of the 24” version he mentioned the issue of pannier bags rubbing on the swing arm. I haven’t ridden the bike with panniers (Radical Bags) however when I offered them up they looked as though they clear the swing arm. The only difference is that Dave was running the SL narrow seat and the standard seat is at least 2 cm wider. There might be an issue with sway but that is easily dealt with by tying the bag to a convenient point on the rack. 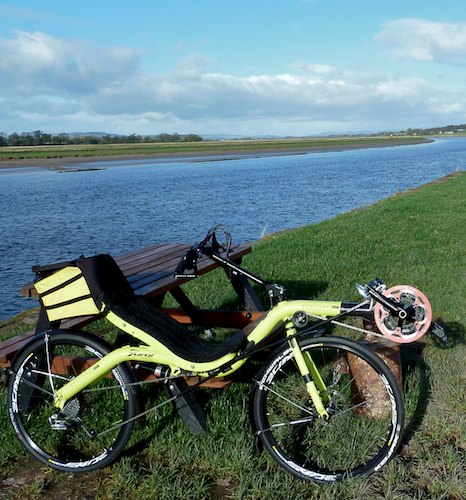 I realise that hard shell seats suit me well and comfort levels are excellent. The rear shock does its stuff. There is no sensation of pogo-ing. The bottom bracket is, for me, just the right height above seat level. Performance riders may wish it to be a little higher. Combined with the moderate seat recline the BB height gives me a good view of the road surface immediately in front.

The unsuspended front does transmit some road shock but the longish wheelbase helps mitigate the effect on the bike.

Seat height is 55/56cms. You sit between the wheels and because of the shape of the seat reaching the ground is easy. I’m 6ft with an X seam of 42.5” and inside leg 32” i.e. short legs / long torso. At junctions I can sit comfortably with one foot clipped in and the other flat on the ground. Ergonomically this is a very friendly machine. Compared to big wheel stick bikes I have owned the Furai delivers better comfort, seat height, weight distribution and bottom bracket height all without any significant weight penalty.

The narrow handlebars – slightly V shaped – are excellent for fast riding. They give you a real feeling of being tucked in to a cockpit. The folding stem looks fabulous but isn’t. The clamp that sets the handlebar height is woefully inadequate and the ‘bar height continually slips out of adjustment. A solution is easy though. Take one slightly bent target archery arrow, cut a portion of the shaft equivalent to the width of the clamp, squeeze gently in a vice until it will slide into the space underneath the clamp and presto you have limited the distance the clamp can move! Shouldn’t be necessary though.

The first time I rode the bike I took it over my short hilly circuit and immediately felt it climbed faster than the Fuego. I seemed to be one gear up all the time. Downhill was good but not as good as a low racer of course. And into the wind it is marginally slower as well. Where a big wheeled bike shines is on less than perfect surfaces. It just seems to roll better over them. And coarse surfaces abound round here. Over a number of rides I would say that my average speed was consistently 1-1.5 kph faster than the Fuego. I put that down to lower weight and less rolling resistance. It is winter and these figures are the result of moderate (not performance) riding efforts.

On steep grunty climbs the bike feels very stable and seems to be able to drop to near walking pace and still hold a reasonable line.

Overall I would describe this as a swift, smooth bike with good ergonomics. It is not a racer but feels as though it will make an excellent Audax / long day ride bike.

It is very versatile. With the standard Challenge aluminium seat fitted it can take a rack and panniers and feels robust enough to carry a load.

One of the tests I use about any bike is to observe how I use it after the initial novelty has worn off. The Furai gets picked as often as any of the others. It must be good! I look forward to warm days with no mudguards and some longer rides. A great bike – and like so many Challenge products it looks great.