Some brief thoughts on the Azub Twin recumbent tandem 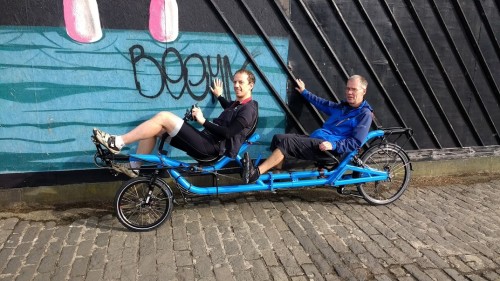 The Azub Twin is a folding aluminium bike which is designed for everything up to heavy duty touring – with the possibility for four panniers behind the stoker (two on this model) plus another two under the pilot’s seat (as seen here). It’s no lightweight and you can easily imagine running it in the wild country without being concerned that anything will break and leave you stranded.

First, a quick whirl around the bike with my observations:

Up front the Azub Twin runs on a 20″ wheel with ample tyre and mudguard clearance. As you can see, it’s suspended which definitely takes the sting out of what would otherwise be a bit of a bumpy ride (or it allows you to run a harder, more efficient tyre pressure at a given comfort level): 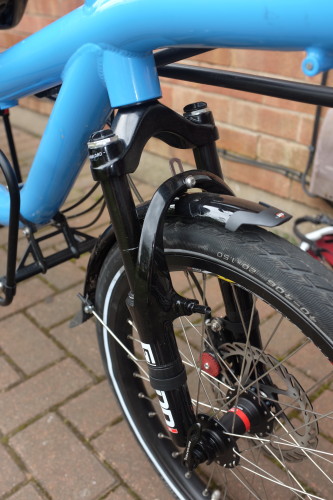 Braking is provided by Avid BB discs (but a wide range of finishing kit is available). You can see the mudguard stays and brake caliper are nicely positioned and routed, in keeping with a high level of finish quality around the bike: 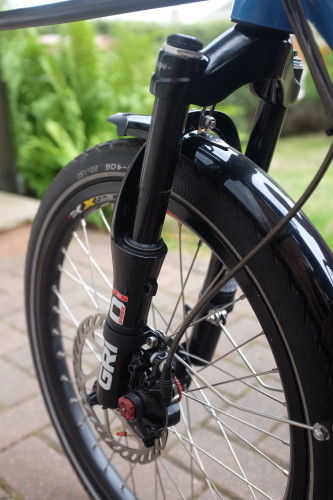 Same applies at the rear. The bike can come with Alfine Di2, ordinary cassette and a few options in between: 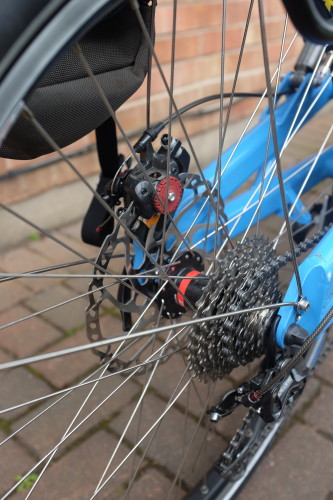 In use the mechanical discs were just fine for stopping power. This included a good run down a 10% grade, but nothing alpine (with any recumbent, I think you need to consider brake heat carefully if you want to ride in the Alps!)

On this model, the rest of the drivetrain comprised a single ring up front mounted on the left hand side, with a triple on the stoker’s cranks: 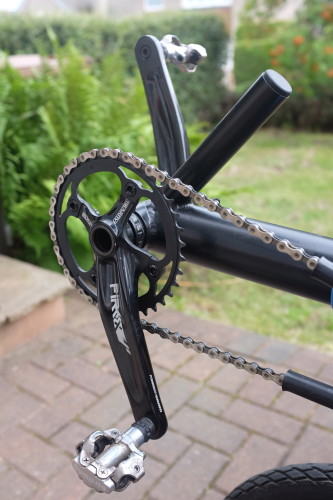 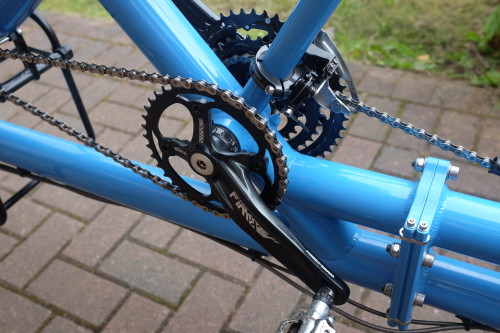 This range of gears was plenty to allow winching up stiff gradients (frankly, as slow as I could possibly manage to balance the bike!) and also to motor along on the flat. There’s a good top gear because of the 26″ drive wheel but the bottom gear isn’t incredibly low for the same reason.

Suspension at the rear is provided by a pair of air shocks. We struggled I think to get the air pressure right so I don’t want to knock off marks for a firm ride (but it was firm!). Experimentation is definitely needed, because with two rear shocks you can’t rely on the guide pressure at all, and I’m not sure it’s linear (two half pressure shocks seem a lot firmer than one at recommended pressure? If anyone has an insight on this, please leave a comment!) 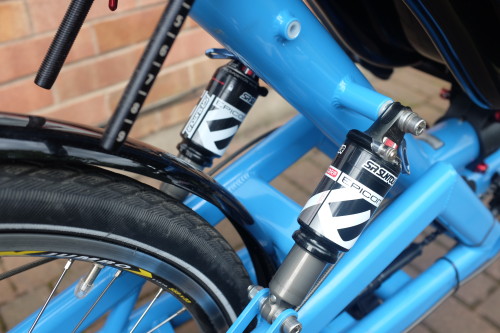 The chain is controlled with an over/under idler and on this model, plenty of chain tube to protect both the captain’s and the stoker’s legs. 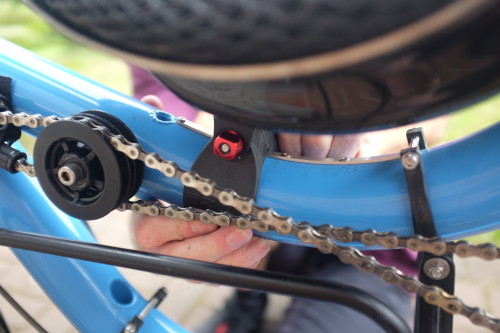 While we’re under the seat, take a look at the mounting hardware – quick release with a graduated scale (if the riders want to trade places often, this would be a significant advantage). A track is moulded onto the frame to guide the lower seat support. This adjustment is provided in addition to the telescopic boom (you can read about the Ideal Position System on the Azub website): 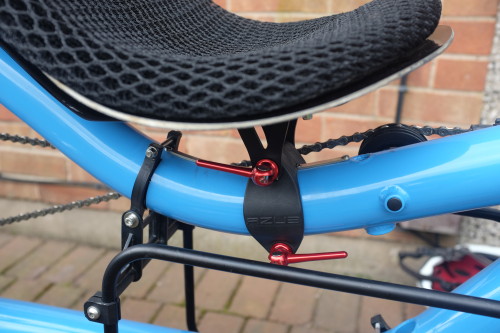 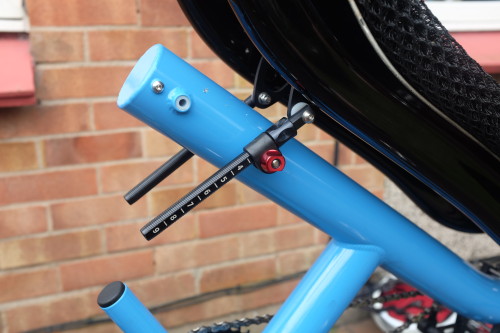 The frame also telescopes to accommodate stokers of different heights.

The seat height for the captain especially is quite a lot higher than you might initially expect, considering the small front wheel. I assume this is ultimately needed to keep clearance for the underslung pannier rack: 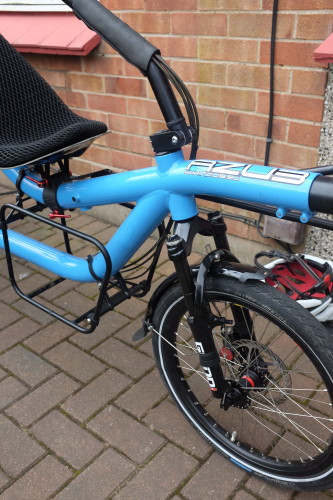 I found the bike a little bit of a handful but my legs are relatively short for my height (which is not quite 5’10”). The cockpit setup is uncontroversial – folding tiller and trigger shifters on this model, but the specifics would vary depending on how the bike was built.

One thing to note is that the captain’s seat height is lower than the first time I wrote about the Azub Twin a few years ago (showing that the company are sensitive to feedback) so if you’ve read that write up, it’s an important caveat to bear in mind when considering a new model. 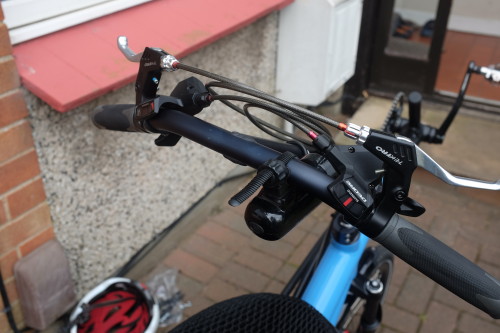 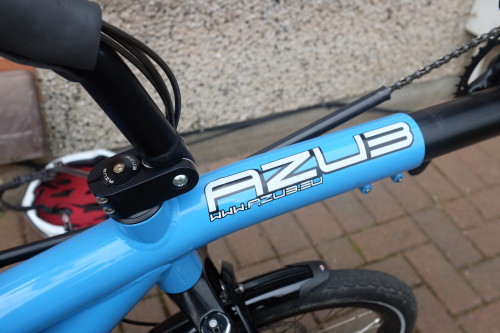 I didn’t see the bike fold, but here’s a shot of the plate joining the two halves together. Not much risk of this coming undone by accident! 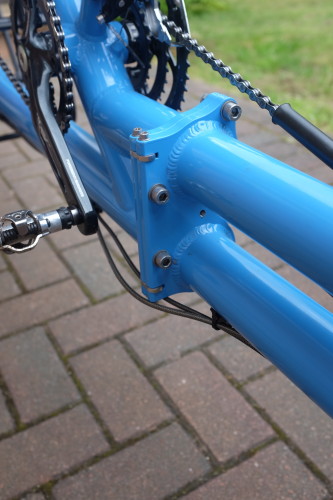 I’ll divide this into two parts:

If you’ve never ridden a recumbent before at all, you should factor in significant learning effort. The stoker doesn’t really have much to contribute other than pedalling (or not!). They do need some awareness of foot positioning at stops and restarts lest you fail to apply power when you need to and come unstuck. But fundamentally, it’s really just the captain who needs to figure out how to balance and steer the bike and then agree on some method of communicating stops, starts and gear changes.

For those of you who can ride a solo recumbent already, I would say that the Azub Twin is on the harder end of bikes to get comfortable with, based on my experience. I rode the first couple of miles as stoker and then swapped once we got into the open country, and it took me probably an hour before I was comfortable with stops/starts/junctions. There’s something very sharp and direct about the steering on the Twin that didn’t give me huge confidence at very slow speed. At least with the tiller, you can move the bars as much as you wish without any risk of hitting your thighs.

It’s been too long since I rode the Nazca Quetzal to make a direct comparison but while I remember the Quetzal as imperious and ultra stable, the Azub Twin felt more flighty and less reassuring. Of course, depending on your preference you might find the Quetzal slow to turn and less nimble, the Twin might be just to your tastes.

All I can really add to this is that after trying the Quetzal I definitely felt inspired to take it on a family tour (though I never did). I wasn’t left with a burning desire to persuade the family onto the Azub Twin. It would probably be a good idea to try both bikes if at all possible because a lot of this is in the eye of the beholder.

Also check out my review of the Quetzal from five or so years back. It’s worth noting that, as well as a higher maximum luggage capacity you can get the Azub Twin with underseat steering – not an option on the Quetzal. 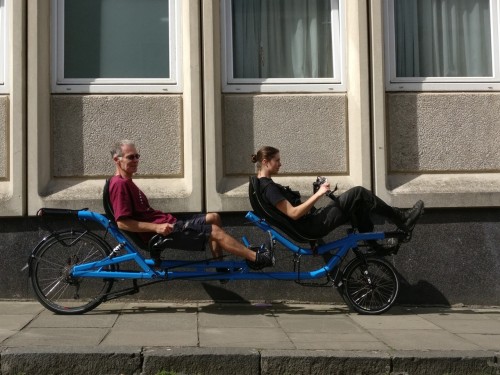