A side-by-side comparison of the speed of the Schlitter Encore, Optima High Baron and M5 Carbon Highracer

Side by side M5 CHR, Schlitter Encore, Optima High Baron

I’ve been riding a review copy of the Schlitter Encore recently, along with the Optima High Baron which carried me to a 7th place finish at this year’s Tour o’ the Borders.

To complete a nice side-by-side performance test I borrowed the demo M5 Carbon Highracer from Laid Back Bikes in Edinburgh – brief side by side comparison here.

The test protocol was simple – go to the promenade and ride up and down beside the sea (nice and flat) holding a given power for the whole of a lap without touching the brakes, then see how fast I went on each bike.

I varied as little as possible between the bikes, including using the same wheels (where possible) and power meter etc. I also tried for the calmest conditions in terms of wind, although naturally in Edinburgh it was impossible to find a calm day.

Just a note – it would be much better to perform virtual elevation calculations for each bike. I think there is a good bit of error in the testing described below, but I just can’t find a convenient route that doesn’t require use of the brakes (compounded by living in the world’s windiest place… it’s a hassle!).

Until someone produces a proper calculation, we make do with cruising beside the sea in the sunshine… I suggest that these results are taken as indicative only, though for what it’s worth I do feel that the ordering matches my gut feel of how each bike rides.

It turned out to be a little tricky to get exactly the target wattage for each run, so first of all here is a graph of speed per watt for each bike (all laps of both directions averaged) to give a comparable ranking of “bang for your buck”.

To add extra context, I’ve plotted previous data from a head-to-head comparison between my DF racer and the Raptobike Midracer which was not captured at the prom (and obviously on a different day, three years ago!)

The ordering hopefully won’t come as much of a surprise, with my DF racer languishing at the bottom of the pile. The M5 Carbon Highracer was fastest, followed closely by the Optima High Baron, with the Schlitter Encore coming in just behind. Probably the most interesting thing about this for me was how little separated each bike:

The next chart breaks down the laps by direction. You can see variation between the bikes that is only really attributable to varying wind speed as the test went on (the Encore does better downwind and worse upwind than you might expect, presumably because the wind speed / direction wasn’t steady). That said, if the Encore was less aerodynamic you would expect to see it hurting more on the upwind laps than the downwind ones (the big open cockpit riding in the airstream etc?): 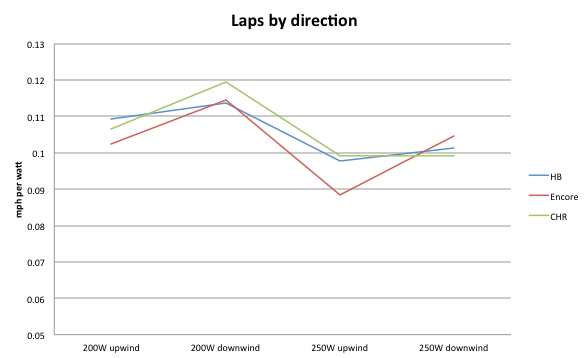 TL;DR – the CHR is a shop demo and not optimised for naked speed, the Encore is a new-to-me review bike and I haven’t spent a lot of time tweaking it, while the High Baron has been mine for three years and I’m very comfortable on it!

Here are a few confounding factors to consider in detail:

– I’m not tall enough to ride the CHR with my power chainset (170mm) so I was using a PowerTap wheel and plain 155mm cranks instead. The PowerTap reads 1-2W higher based on testing conducted with both meters fitted on a turbo trainer (so this slightly disadvantages the CHR, by about half of one percent – down in the noise of wind gusts unfortunately).
– I used the same 32 spoke 3-cross Archetype wheelset with 28mm Schwalbe Ultremo tyres on the Encore and High Baron, but the M5 CHR doesn’t have enough clearance, so I had to use the provided Shimano R500 front with Schwalbe Durano Plus tyres (faster wheels but slower tyres on the CHR).
– The Archetype wheelset has a Shutter Precision hub dynamo on the front, the R500 does not. (The lights were off, but there is still a small amount of extra friction, amounting to the equivalent of a couple of feet per mile extra gradient).
– I used a Radical Aero seatbag on all three bikes, but on the CHR I used the stock bag from Laid-Back-Bikes which still has the fabric bottle holder on the side – I cut this off on my own Aero seatbag.
– I didn’t have a mirror fitted on the Baron or Encore but had a small mirror fitted on the CHR, although I turned it parallel to the wind for the test.
– Both the M5 CHR and High Baron are running dropped chains, but the CHR has a bit of chain tube to make it more useful as a shop demo, which will add some (an unknown amount of) friction to further disadvantage the CHR.

Refer to the posts linked in the first two paragraphs for photos of all three bikes (I’m afraid I’m still working on formal reviews of the M5 CHR and Encore, so don’t have comparable shots of them to stick in a rollover).

My High Baron is as reclined as the frame will allow, but the M5 CHR can go flatter with a bit of modification to fit a lower seat pillar, as can the Encore (to a lesser extent – the seat back was closer to the max recline without doing something drastic).

If you’re willing to ride with a really low angle seat you can certainly get more speed out of these two bikes than I’ve demonstrated, whereas the High Baron is probably about as good as anyone is going to get it. (M5 have the world hour record on a similar design where the rider lies flat on his back!). Of course, you may not want to ride around flat on your back with special measures to avoid looking under your bars to see the road ahead. There’s a reason that almost all bikes are sold with a seat at these angles or above…

You could also put a tiller on an Encore very easily, and get your arms tucked up out of the way (while the J-bars are one of the big selling points of this design, you are sticking a couple of feet of pipe into the airstream above your knees, and also your arms are spread wider). But maybe you’ll decide that a nice handling bike which is pretty fast is fast enough! There’s more to life than speed at any cost…

Finally, I didn’t attempt to equalise the weight of the bikes, since I’m not interested in purely their aerodynamics, rather the “complete package”, and on the flat the difference should be minimal anyway. However, note that the M5 CHR and Schlitter Encore both weighed in at a little over 10kg (22lbs ish) whereas my High Baron weighs more like 11.5 – 12kg in current form.

All could be lightened but the High Baron will always be heavier. This, plus frame and cockpit stiffness, would show up in a bigger way on an actual cycle ride with hills, dropping the High Baron down the ranking.

I believe (subject to a full dismantling and the weighing of individual parts) that the Encore can be made lighter than the M5 CHR.

Anyway… hopefully this is of interest, and as ever, feel free to drop a comment below…