How about the much-feted M5 Carbon High Racer as a first foray into the world of recumbents?

I recently had the pleasure of corresponding with Mike on the purchase of his first recumbent, intended to work around some neck pain he’s been having.

It’s safe to say that he plunged in at the deep end with an M5 Carbon High Racer and I’ve been following his updates with interest as there has been something of a learning curve.

Mike kindly agreed to write a little about his initial experience with the CHR:

At the end of last year my neck finally decided that my 25 years of riding a DF were probably at an end. Even on a turbo with the front wheel raised a foot to get the bars much higher than the saddle made no difference to the pins & needles in my arm & fingers.

I got in touch with a young chap who I’d only met a couple of times on the club run but I was quite certain that he had dabbled with ‘bents. Sure enough his Optima Falcon was very kindly loaned & locked onto the turbo.I tried an hour session & incredibly there was no neck or arm pain at all. Google soon linked me up with Bikefix, Kevin at D-Tek & David at Laid Back Bikes & then onto Dave McC. The UK forums seemed very quiet but BROL was incredibly active. 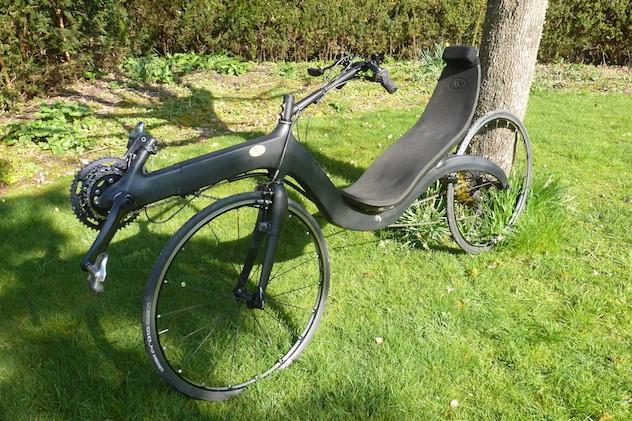 I was initially drawn to the Fujin & Low Baron purely on looks but was quite aware of the skittishness of the 20” front wheel from a few rides on the Falcon. Both Kevin & David pointed me in the direction of dual 700C’s & David was the one responsible for mentioning the M5 CHR. Although there was a demo at LBB it was quicker to go & see Bram in Holland than to journey to Edinburgh. A half hour test ride was enough to convince me to bite the bullet & a frameset was bought. I had read many times that you won’t know what a particular bike is really like until you’ve lived with it, warts & all, for about 6 months.

The build was relatively straightforward, the only odd bit being the need for a Campag rear U brake for the front (modified with a longer through bolt). The spec was Sram XO 3×10 Gripshift, Rival rear mech, Shimano 105 triple chainset (50x39x30) which would allow for the use of a smaller “granny” if necessary, a 105 front mech to replace the XO which refused to stay put on the mounting post, a 12-27 cassette & Tektro rear dual pivot brake & minimalist levers.

The worst part of the build was drilling the seat. There are two reinforced areas where the carbon is marginally thicker. When I left Bram’s I took what I thought was the most poignant dimension on the test bike ie from the front of the seat to the bottom bracket. The seat was set up, the holes drilled & then a sigh of relief to find that the end of the crank just missed the tyre by 10mm. I’m just 6’ but have a relatively long 34” inseam & thought this would have given me plenty of clearance at the front end. Without shifting the seat considerably more forwards (& so drilling into the unreinforced section) I don’t know how those with an inseam of much less than 34” can fit the CHR, unless opting for shortened cranks. 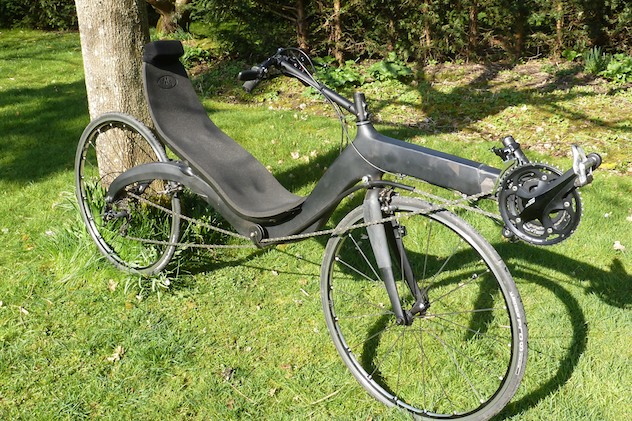 And so to the first test ride. Let’s say that the bike unceremoniously dumped me far too often during slow speed manoeuvres. Road junctions were treated with dread, particularly 90’ right turns. I gave up trying to work out what was phasing me until I got home. On the bright side, a relatively flat route of 40 miles had resulted in a 18mph average without even breaking into a sweat. Initially I thought it was the dropped return chain which was causing the slow speed offs so I lifted the chain into a tube. A bit more investigation & the penny dropped; it was my feet clipping the tyre which was throwing me.

My first reaction was “how daft is a design like that” but I am now learning that ‘bents are a series of compromises & that you can’t have everything. I have learned that starting off at junctions benefits from one-legged pedalling until under way. Also you’ve got to keep your feet out of the way when doing sharpish turns at speed. Climbing is another adventure. Remember that I’m still quite new to this type of bike & I’m trying hard to cope with the relative instability of slow speed climbing. At present the wobbles get to me at about 7mph. I know I have to relax my upper body & that with practice I’ll be able to spin at a much slower road speed. 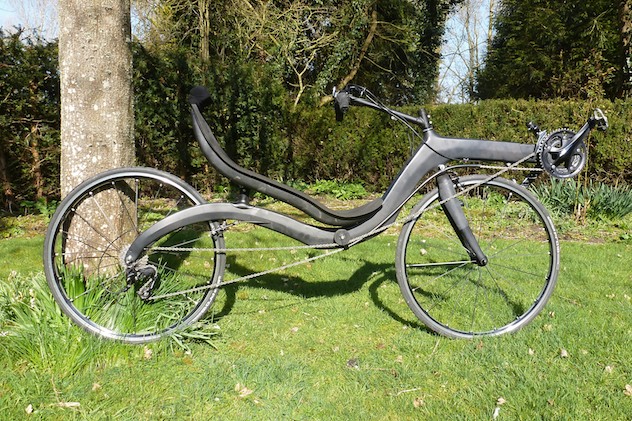 So, all in all, quite an eventful last 4 months. I still have a one minute re-learn curve before each ride & I still marvel at the manoeuvrability of a DF which, apart from its ability to cripple your neck, shoulders, arms, wrists, back & backside, is quite a brilliant design.

I’ll be keeping in touch with Mike in the hopes of further updates and that he’ll get the starting and turning nailed.

I’ve just started riding the Laid-Back-Bikes’ demo CHR with a view to a long-term review… watch this space.

If anyone has any observations or tips for Mike (or me!) please leave a comment below –