Two way traffic (and pedestrians) are forced into head on conflict which just didn’t exist before, and has been completely manufactured by the redesign of the path…

In the north-west of Edinburgh a short stretch of tarmac links the city centre with West Lothian and Fife, converting tens of thousands of car journeys from the gridlocked A90 to virtually car-free bike commutes.

Just twenty minutes hard riding will take you from the edge of Edinburgh at Cramond Brig Toll to Haymarket, or down to Leith – without ever suffering from the city’s dodgy drivers.

Recently the city decided to spend a sackload of cash giving this path a facelift, the primary benefit being path lighting to improve personal safety. (Unfortunately an unlit wooded path doesn’t convert all that many car commutes to cycle ones in the winter months, especially – if you can forgive an anecdote – amongst the women I know who would otherwise use this route.)

In short order the contractors came in, repaved the path and added in the handy stud lighting that has proven so popular on the Union canal. So far, so good… 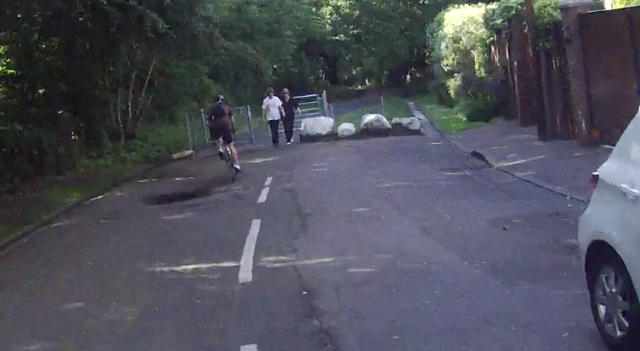 Then the rot started to set in. Within days, trenches were dug across the path and half-buried bricks put in, to prevent cyclists getting too comfortable. Giant slow signs have been painted everywhere for the benefit of occasional dog walkers, putting them in a strong bargaining position when Fenton is allowed to hospitalise a hapless commuter.

Finally, a chicane has been put in at the top of the path along with the city’s favourite “tramline” tactile paving (naturally no space has been allowed for cyclists to negotiate the paving before the chicane, they’re right next to each other).

Incredibly, the city actually paid to *remove* the existing path entrance and even put giant boulders across it. Now two way traffic (and pedestrians) are forced into head on conflict which just didn’t exist before, and has been completely manufactured by the redesign of the path:

Apparently this has been done because “we are under a lot of pressure from residents there to tackle excess speeding from cyclists”, according to a council source. (Strava reveals that the 85th percentile cycling speed is under 20mph and the official Stats19 data shows there were no injuries, even slight ones, to any pedestrian or cyclist in the ten years from 2000-2010, but hey ho).

Take a look at the video. Is that really what residents wanted? Couldn’t they have enjoyed walking along a path that’s twice as wide where cyclists start off on the opposite side? 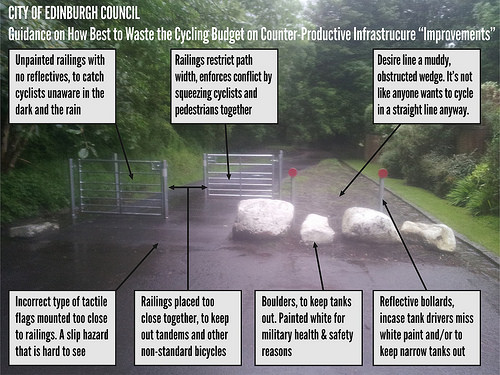 Image pinched from the discussion on the CCE forum, by Kaputnik

Ironically the far side of the path (I didn’t bother uploading the whole video) is considerably narrower as houses have been built hard up to the tarmac, with typical lack of foresight. There the council has installed speed tables because residents’ driveways preclude chicanes.

The moral would appear to be that it’s OK to drive at 20mph but cycling at that speed is reckless, optimistically ignoring the fact that 95% of the people cycling through *are* drivers who’ve given up the cut-and-thrust of Edinburgh’s roads. (While you wouldn’t drive on such a path, after you remove oncoming traffic and parked cars from the width of Edinburgh’s actual roads the space you’re left with to drive in is not dissimilar).

I don’t pretend to offer any kind of solution to the odd nutter on a bike, other than pointing out that we should be using the available space to make wide paths when it’s so easy to do so. Unfortunately so long as the only alternative route is a multi-lane road where traffic is either completely stationary or belting along at 40-50mph, a lot of commuters are going to switch to an attractive empty cycle path, and every so often one of them will annoy a pedestrian.

It’s still better than putting them back in their car.