Why do celeb cyclists keep getting it wrong on group punishment?

“Even Chris Hoy hates you!”, a BMW driver shrieks at a bemused middle manager who’s just trying to get to work by bike. After swerving at him a few times and maybe throwing a half-empty Starbucks out of the window, said BMW driver roars off in search of a fresh vulnerable road user, leaving our hero to try and pick up the wreckage of his day.

There was a feature in the Torygraph last week titled “Chris Hoy: my anger at dangerous road cyclists” in which Hoy seems to have done his level best (whatever his intentions) to perpetuate the myth of collective responsibility.

This is the nasty idea that your physical safety outside your home depends on some kind of group reputation, aka “respect”, which has to be preserved by everyone who ever buys a bike. Hoy’s message to Scotland’s cyclists? “If you want respect you have to earn it”.

Hmm. I want my colleagues at the office to respect me, but even if they don’t, they sure as hell aren’t allowed to hit me with deadly force in the car park.

You’d think it would be straightforward to stick to condemning dangerous, aggressive, or outright violent driving without getting into the murky waters of victim blaming and whether or not “she deserved it”, but apparently not.

Exactly why your health should be hostage to any of the millions of Britons who can easily buy a bike and piss all over the highway code is not an idea that is fully developed. Anyone who’s been involved in a similar article knows how it goes, and we could just chalk this up to the media agenda, but perhaps because it’s a bit close to home, I feel the need to stick my boot in. 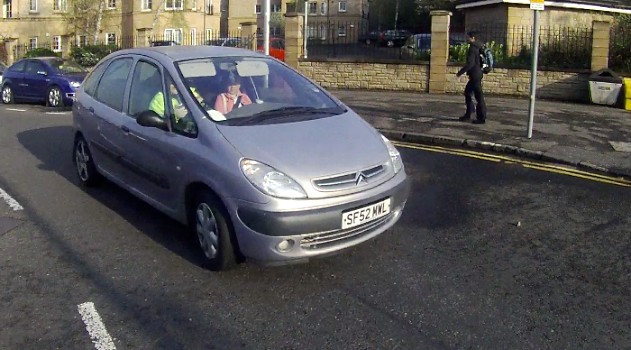 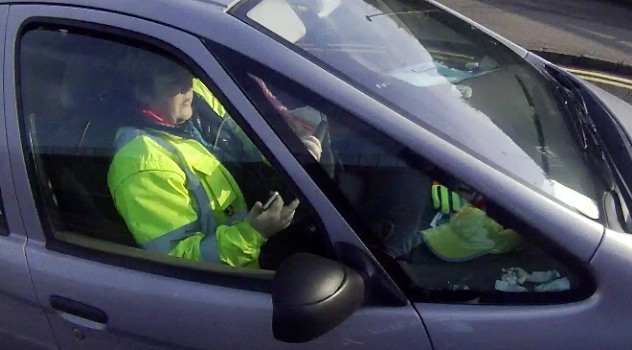 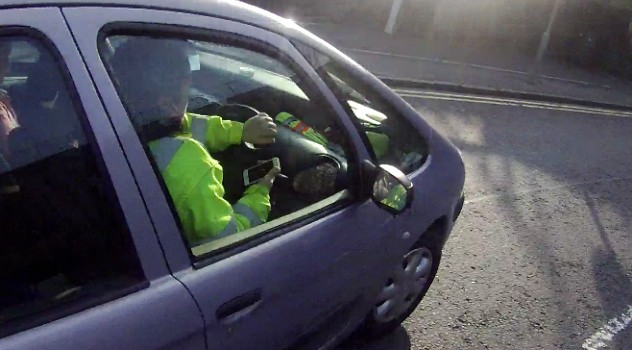 I just pulled this driver up at random from public video footage – no particular connection with the article, other than the broad daylight offending. Where’s Jensen Button or Lewis Hamilton to tell us motorists need to earn respect if they want to avoid getting points and killing people?

In Scotland we have built an incredibly hostile road environment, where extrajudicial punishment of cyclists for real or perceived failings is routine and the response of the police and judicial system is timorous and ineffective.

For better or for worse, so long as Scotland’s motorists are able to run rampant with impunity a significant number of those who choose to get about by bike will choose to opt out of the niceties of the Highway Code.

Just a couple of minutes from my house, drivers park fully on the pavement outside a new block of flats, forcing pedestrians to walk on the busy A70 at all hours of the day and night.

I won’t try and develop a moral hierarchy in the space of one article, but we should be able to agree that if you were one of the people who had to dodge traffic walking past that block of flats every day and you went on to buy a bike, you’d probably find it pretty easy to justify hopping onto the pavement for a few seconds yourself. What’s sauce for the goose is sauce for the gander, right?

I’ve written before about my lack of success with Police Scotland even when a motorist committed a blatant offence in High Definition video (then proceeded to wave his mobile under my nose while explaining why it wasn’t his fault), although others have had more luck than me.

The right to life doesn’t need to be earned

Imagine if the civil rights movement had been referred to every misdemeanour committed by a coloured person and told “if you want respect, you have to earn it”.

Imagine if people complaining about poor rape conviction rates were pointed to (random) crimes committed by women and told “if you want respect, you have to earn it”.

I could go on, but hopefully the point is clear. The right to life is not something that you can forfeit because a stranger on the other side of the country who happens to own a pedal-powered vehicle once pissed your assailant off. For some reason pavement cycling and red light jumping annoys motorists more than driving on the pavement and jumping red lights committed by other people in cars. So be it.

Chris Hoy is just the latest celeb to shoot his mouth (and foot) on this subject, following hot on the heels of luminaries including Bradley Wiggins (who with majestic irony was smashed off his bike moments after explaining that cyclists just needed to obey the law and everything would be OK).

Maybe next time Sir Chris could just say “pavement cyclists? Whatever. Ask me when 85% of drivers* don’t admit to speeding and using a mobile phone”.

Failing that, perhaps he could follow the example of Usain Bolt, who conspicuously doesn’t give safety advice to pedestrians at all…

* your mileage may vary

One thought on “Hoy on cyclists’ collective responsibility”