Buy the right Garmin GPS without wasting a ton of cash

You probably just want one, but luckily for you (and unluckily for my wallet) I’ve ended up owning five GPS devices and can do this gratuitous handlebar shot. I have the Edge Touring, not the Touring Plus, and an Edge 810 over the older 800: 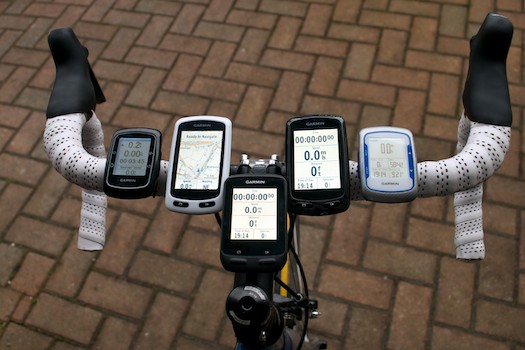 Admittedly this is an unhealthy and expensive obsession…

Lots of sites will give you a huge table of features to compare, but like me your eyes probably glaze over after the fifteenth column. 😉

So, in ascending order of eye-watering price, here’s a concise guide to which Edge GPS is right for you (and why you might want to spend more):

The Garmin Edge range in one sentence each

If all you want while riding your bike is conventional stuff like speed, distance, and time, then the Edge 200 is all you need. You can just ignore the fact that it uses GPS while out riding, and you can’t significantly improve the GPS track it saves even with a device costing four times as much. It will be more accurate than the traces everyone else is uploading to Strava or MapMyRide from their phone, anyway 🙂 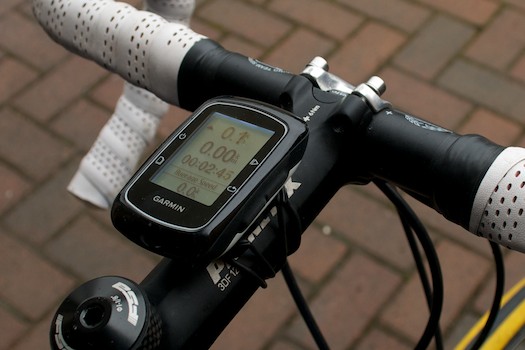 The Edge 200 has much better battery life than a mobile, it’s smaller and less obtrusive on the handlebars, and it’s more reliable too (I’ve still to find a decent Android bike app).

Don’t dismiss this simple little gem just because it doesn’t have all the bells and whistles! Wiggle have these for under £90 (20% off) at the time of writing, while Chain Reaction are doing a similar deal.

The 500 has the same compact size as the Edge 200 but integrates fully with Ant+ sensors for heart rate, cadence, and power.

Being one of the older models, your wallet may thank you for picking up an Edge 500 – there are often good deals on refurb models from Wiggle, while Chain Reaction are doing a straight 10% off at the time of writing. 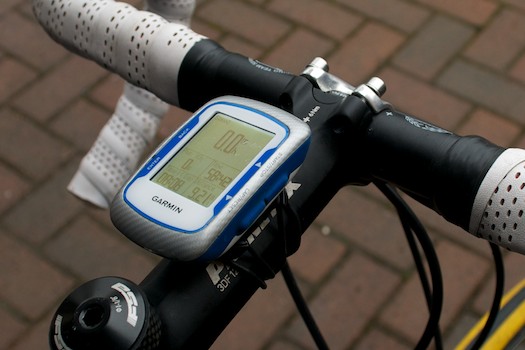 If you want a lot of data while you ride, the Edge 500 offers all you can imagine… instead of displaying one page of ordinary cycle computer data fields, you can have up to five pages each with up to eight configurable data fields.

I have one page for “right now” fields like current speed, cadence, and heart rate, another page for lap averages, while a third does trip totals, time of day, temperature and so on.

Additionally, the Edge 500 is equipped with a barometric altimeter allowing it to record quite accurate elevation data (something which is lacking in the Edge 200). However, it should be noted that many sites will overwrite the elevation data recorded on your ride using survey data, so this isn’t as big a deal as you might imagine.

The Edge 500 doesn’t “navigate” you, but it does have the ability to display a breadcrumb trail of a route you downloaded in advance (DIY or someone else’s). Like a road map with only one road (and no background detail) this will still display turn cues and warn you if you go off route.

The Edge 510 is the big brother of the Edge 500, offering a similar number of data fields, integration with Ant+ sensors (speed, cadence, heart rate, power) and the ability to follow a pre-loaded route with turn cues – but no mapping or navigation. 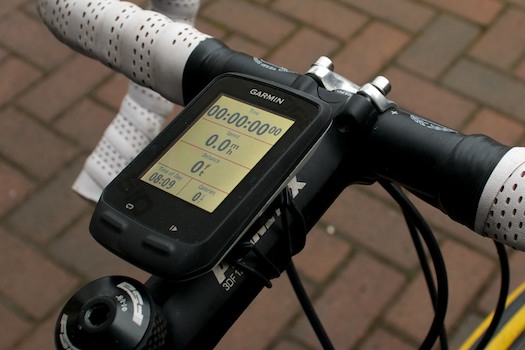 The main advantages of the Edge 510 over the Edge 500 are the touch-screen interface (an improvement over the sometimes frustrating process of remembering what the four buttons on the 500 do in every different situation!) and slightly better screen, but principally the ability to have a different screen setup for different bikes.

On the Edge 500 you’re stuck with one set of fields (although you can turn individual pages on and off without too much pain) but the Edge 510 allows you to set up the whole interface differently for each of your bikes.

The Edge 510 offers a full time altitude profile (missing from the Edge 500, but of limited interest while riding) and the navigation (follow trace) screen is a bit better too.

Finally, the Edge 510 will interface with a phone to allow real-time tracking online (if you have signal, and while your phone battery lasts). A niche feature? I’ll let you decide…

The Edge Touring is a stripped-down version of the Edge 800, aimed at those who want navigation but *not* training / performance features.

The basic Edge Touring is only a little more expensive than the Edge 500: Wiggle are doing it for well under £200 (10% off), while Chain Reaction have 10% off. 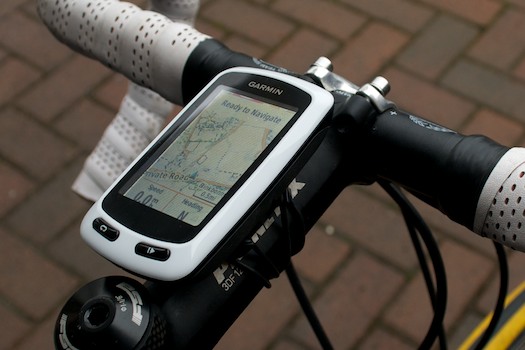 With identical hardware but a streamlined firmware package, you lose the ability to interface with Ant+ sensors altogether (although you can pay £50 more for the Edge Touring Plus, this still only allows a HRM strap – no cadence or power).

Instead of sensors, Garmin are pushing the Edge Touring on navigation features – A to B (or circular) routes calculated using OpenStreetMap data, displayed on the excellent full-colour display. If you buy the Edge Plus you get a microSD card with maps pre-loaded, otherwise you have to get these as a free download.

The data fields that can be displayed on the Edge Touring are reduced, but still likely to satisfy a less data-obsessed rider – while the trace recorded for later analysis is top notch. The Touring Plus has the barometric altimeter enabled and displays a rolling profile of your ride along with current altitude and ascent.

Battery life on the Edge Touring models is good enough for a couple of average days in the saddle (or one really long one) at around 17 hours. While many people have been scratching their heads over a touring GPS which doesn’t take AA batteries, this is the downside of Garmin recycling their Edge 800 hardware – you’ll need to use an external AA battery pack instead (I’ve managed a 1200km continuous trace this way), though sadly the waterproofing of the Edge is compromised while under external power.

Despite the arrival of the 810, the Edge 800 is still readily available for a relatively small premium over the Edge Touring – Wiggle are doing it for 25% off just now, while Chain Reaction have 25% off too.

This will add all of the performance features you’d find in the Edge 500 combined with the screen, mapping and navigation abilities offered by the Edge Touring. As you’d expect, the firmware isn’t as simple as the Edge Touring and you’ll have to put a bit more time in to get the most out of the Edge 800.

In many ways the Edge 800 looks like the real sweet spot of the range just now:

Why would you spend more?

The 810 is more of an evolution than a real advance on the Edge 800, but comes at a hefty price premium unless you can find it on sale – worth keeping an eye on both Wiggle and Chain Reaction for this one. 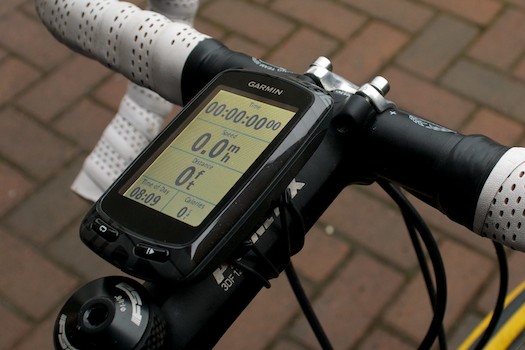 The main feature of note is the ability to customise the interface for each of your bikes (as with the Edge 510) – something that’s missing on the Edge 800, which is stuck with shared data screens for all bikes (though the 800 allows you to turn particular pages on and off).

However, apart from that, a streamlining of the menu interface and smartphone integration for live tracking online, that’s about all you get for a significant extra chunk of cash. Bluetooth is nice for uploading rides without reaching for the USB cable, but it strips an hour from the battery life of the Edge 810, so it’s not a clear-cut decision… 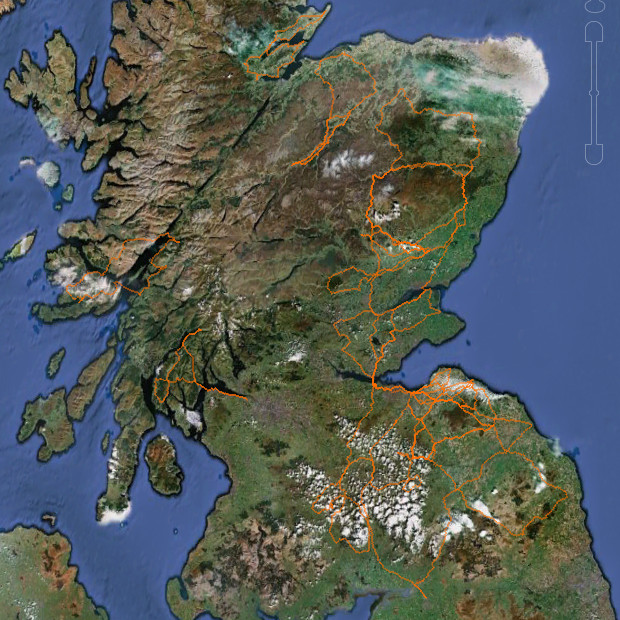 My better half loves the Edge 200 and turns her nose up at anything more complicated – even the Edge Touring. She just wants to know the basics while riding, and to upload to Strava and look back on later.

The Edge Touring is a nice upgrade along the same lines, adding mapping (for a fistful of dollars). To be honest I didn’t think I saw the point of the Touring models until I actually started using mine – the simple interface is a massive improvement.

If I had to choose just one GPS, more often than not I reach for the Edge 500 – compact, reliable, and feature full. I ride with power, so the 200 and Edge Touring aren’t going to cut it.

For unknown rides where I want a map, the Edge 800 is ideal (I’ve got an 810, but I regret it). Many will be quite happy with one of the cheaper GPS models and falling back on their phone for the odd bit of mapping.

Whatever you choose, riding with GPS is major step up from conventional bike computers. The fact that you can look back and see where you rode any time in the past (and how long it took you to get anywhere) is a massive bonus.