Over on CCE, someone posted a link to a fascinating Strava heatmap showing to-the-second recorded rides for a huge number of UK cyclists.

It’s worth emphasising that this kind of information is virtually unprecedented. For the first time planners, policymakers (and everyone else) potentially has access to aggregate and individual cycling behaviour on a second-by-second basis. 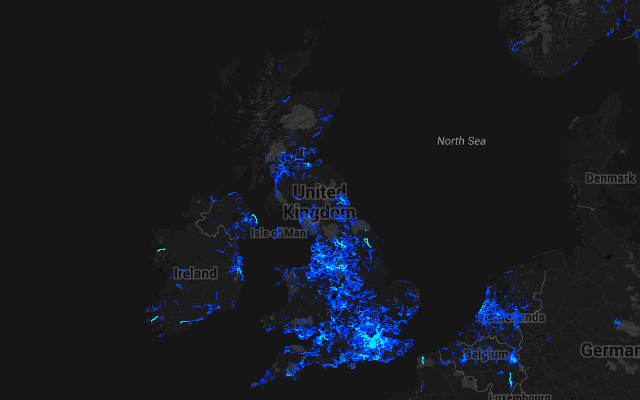 Just as a taste, you can actually see that nobody (who uses Strava) cycled along the Quality Bike Corridor at the same time that the much bigger (parallel) Minto St / Gilmerton Rd was seeing heavy traffic. You can see that large numbers of cyclists are using the nasty 40mph A702 to enter Edinburgh but you can also see that they don’t like it (because a significant majority divert onto Braid Rd at the first opportunity).

It’s taken years for Edinburgh Council not to fit bike counters that, once rolled out, will still not really tell us much about cycling patterns, let alone give us the ability to examine the rest of their route.

Unfortunately, Strava is becoming increasingly compromised by “stravandalising” – the vexatious flagging of stretches of road or path as “hazardous” by self-appointed internet policemen (or women, in fairness, etc. etc.).

While I’m not unsympathetic to the views of people who think comparing speeds on any public thoroughfare is intrinsically wrong, they seem to fail to appreciate that there’s no objective assessment to make. By this I mean that while speeding or drink driving are nice and objective, the “hazard” flag is a purely moral judgement, and as I see it, one that is rarely being made wisely.

Strava’s apparent fear of bad press has led inexorably to the point where my own commute now has fewer sections which are apparently safe to cycle than those which are not, and I suspect things are only this “good” because other users are re-creating segments as fast as they can be deleted.

Why anyone would pay a monthly fee for something which anybody with a free account can delete in moments is quite beyond me – I made the decision long ago that I wouldn’t pay for Strava under those conditions.

In terms of the market, the issue of “stravandalising” segments promises to be quite interesting. Strava users who feel they’re paying for a service which they don’t receive are easy pickings for rival services that offer a better proposition.

You’d think Strava would be desperately concerned that someone’s going to do a Facebook on their MySpace – it’s not that hard to imagine.

Few people will see it this way, but let me make the argument:

I find it pleasingly ironic that people who claim to be motivated by safety seem hell-bent on destroying pretty much the only centralised record of realtime cycling behaviour that’s ever been gathered. Talk about taking the short view.

When you look at “hazard” segments in detail the picture that is painted is often not one of road rash, mangled kittens and dead toddlers at all, but this demands the wisdom to look beyond any distaste at the headline element, something Stravandals clearly lack.

Researching this piece, I looked up the leaderboards of two classic Edinburgh “hazard” routes that have long since been expunged from Strava: the Union Canal and the Roseburn Path.

I hear you gasp in horror. But what does Strava’s leaderboard actually reveal?

The maximum segment speed reached by any cyclist on the Union Canal this month is 16mph, while the maximum reached by any cyclist descending the Roseburn Path is 21mph. (As you’d hope, these speeds reflect that while both are very quiet during most hours of the day, the canal is only wide enough for two cyclists to ride abreast, while the Roseburn is the width of a road).

I’m not interested in arguing about whether 16mph is too fast on a deserted towpath.

I don’t even feel like pointing out that the original Strava segments both time-shifted cyclists to quieter hours of the day (last summer I left an hour early and avoided almost all pedestrians, but with no segment, I may as well ride the same way in rush hour) and discouraged rapid progress across the Slateford viaduct (because the segments were at either side of it, it wasn’t timed).

I *agree* that there’s a moral argument that says this is all wrong, but based on the actual casualty stats, I also believe that any objective assessment of the risk would find that it’s relatively trivial.

I people watch well over a hundred miles a week and the fast riders are almost never the bad ones. Want to see near misses? It’s the two-tings-and-a-prayer brigade that are doing the damage, and they’re hardly the Strava stereotype…

What I think is much more interesting is the argument that brushing this under the carpet, hiding the data in the hopes that cyclists will all start dragging their brakes, is both a failure in terms of safety and actually a retrograde step – if people are dispersed from Strava to rival services who take a stronger line for their users this resource, which really seems to exonorate cyclists more than it condemns them, could be lost.

Strava speed = not necessarily that fast

The 85th percentile speed for the Roseburn Path this year is only a hair over 20mph – the design speed for modern shared cycle facilities. And that’s counting each individual’s *fastest effort* with the prevailing wind behind them – for a true picture you then need to drill down further: I show on the leaderboard at 18mph but my average is 15mph…

Isn’t this actually rather reassuring? Worrying about the KOM alone is like making road safety decisions based on the fastest speed any single car has ever travelled at, ignoring the question of how fast people drive from day to day.

It would require more data gathering than can be managed in retrospect to see whether the removal of segments has actually led to a reduction in speeds (I wouldn’t expect so, but I’m only guessing).

Let me finish with this question: if motorists were voluntarily publishing personally identifiable GPS records of their speed and route, can anyone seriously argue that we should hide that data, bury our heads in the sand – or would we be falling over ourselves to access the lessons that data contains, and reassure ourselves that people just aren’t driving all that fast (or are they?)

The sad thing is – there are objectively hazardous locations and the most popular Strava segments invariably grew to be the ones which didn’t include them. What we have now is the old school “how fast can I do my entire route, traffic lights and all” – is that actually safer?

Whew. If you stayed with me through that, you deserve a badge…

18 thoughts on ““Stravandals”: the Strava safety police and their “hazardous” own goal”