Low bikes may still be the most popular, but the days when “recumbent” had to mean “small, odd-sized wheels” are long gone.

While there are plenty of reasons to go for a small wheeled bike, almost everyone now makes a recumbent running “full size” 700c hoops. These bikes are increasingly making an favourable impression, especially on the long distance circuit.

On this page, five bikes from the Edinburgh-based showroom of Laid-Back-Bikes compete: from Nazca, MetaBike, Optima, RaptoBike and US manufacturer Bacchetta. (There are other 700c bikes. When I’ve ridden them, maybe I’ll do another article…)

Let’s take a look… roll over the labels below the image with your mouse to flip the photo (for some reason you sometimes need to refresh the page if using Chrome): 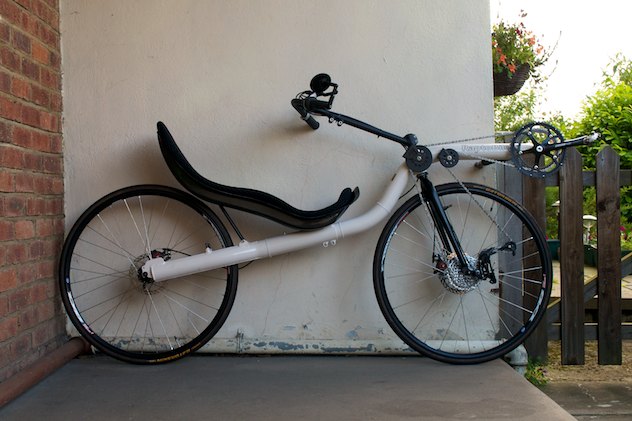 Where once you had a stark choice between small wheels or the extreme height of a US-style stick bike, there are now options to suit a much wider range of riders.

David Gardiner at Laid-Back-Bikes specialises in all of these models (each one is a Laid Back demo which I have reviewed in depth), and I recommend interested parties get in touch with him to discuss your individual circumstances. 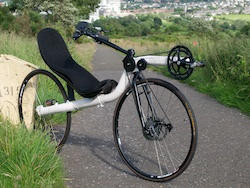 Combining big wheels with a low seat height and trademark versatility, including the ability to take discs and big tyres, pannier racks, or carbon aero wheels and a highly reclined seat, there’s something for everyone here. 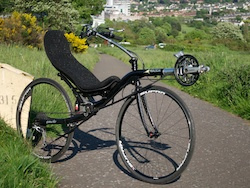 Built to the same robust standard as other Nazca bikes, and with the same comfort factor thanks to the rear shock, the Gaucho 28 gets you up high (but not too high!) and rolling easily over rough roads.

Thin slicks and caliper brakes only. 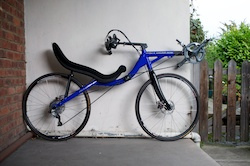 Stiff for great efficiency, light enough to be popular with the climbers, yet versatile enough to take MTB tyres and disc brakes and ride off road… 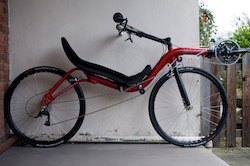 The classic Baron lowracer got a 700c front wheel in this update, merging the best features of stretched low bikes with the advantages of full-size wheels.

Rides like a dream but not the most adaptable… 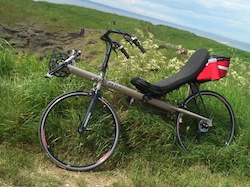 The archetypal stick bike – light, stiff, very high and relatively hard to handle. Not easy on the eye, but may be friendly to a tight budget.

It could hardly be a 700c bike comparison without one stick bike, after all 🙂

When it comes to options, two of these bikes stand head and shoulders above the rest: the RaptoBike Midracer and the MetaBike.

The RaptoBike Midracer can only accommodate a 700x25mm tyre to the rear, but can go much larger at the front (and if you drop down to 26″ or 650- size, both ends can be very chunky). As well as caliper and disc brakes, both ends will accommodate cantilever / v-brakes.

Both the MetaBike and RaptoBike Midracer will take a standard pannier rack in addition to seat-based bag solutions.

In contrast, the Corsa, High Baron and Gaucho only support caliper brakes and take relatively narrow 700c wheels only (although if you *never* want full size wheels, you can buy a 650C Corsa or a Gaucho for 26″ or 24″).

The High Baron and Gaucho won’t take a pannier rack easily (update: you can order a Gaucho with rack mount braze-ons as an option). You can at least fit the Corsa with specialist pannier racks that hang between the wheels.

The Gaucho’s rear suspension makes it an outlier in terms of overall efficiency. I don’t want to pretend that I have any meaningful measurement of this, but it is noticeable to me when I ride a suspended bike over a rigid one. (I still completed Paris-Brest-Paris comfortably on the Gaucho, overtaking countless riders up and down hill).

The Raptobike, meanwhile, is very stiff but the chain is directed through such a large angle that I can’t help but assume that a small proportion of power is being skimmed off the top. (But is it a significant amount? This is an assumption that I’m desperate to examine with a second power meter, if anyone wants to lend me one!)

Simple factors can be more complex than you might think – for instance, even the supended Gaucho’s drivechain is straighter than the Bacchetta Corsa. Despite received wisdom it seems that Euro frames may (at least sometimes) have a straighter drivetrain after all.

The Corsa is noticeably at home on the open road, rolling easily – partly redeeming a bike that I found so bad in traffic that it’s the only one I wouldn’t consider commuting on (and I commuted for years on a lowracer). Subjectively, I can’t help but feel the giant-size open cockpit is compromising performance a little.

Both the High Baron and MetaBike deliver in spades on the efficiency front. The Baron is lower and more stretched out, has triangulated rear stays and a huge internal gusset welded into the bend of the frame. The MetaBike has fat tubes and the distinctive triangulation at the head tube gives it legendary stiffness, while the drivetrain has one fewer idler on the return side of the chain (three VS four on the Baron, including the idlers in the rear mech).

You can get a good idea of the height and length differences between the two bikes from the following photo: 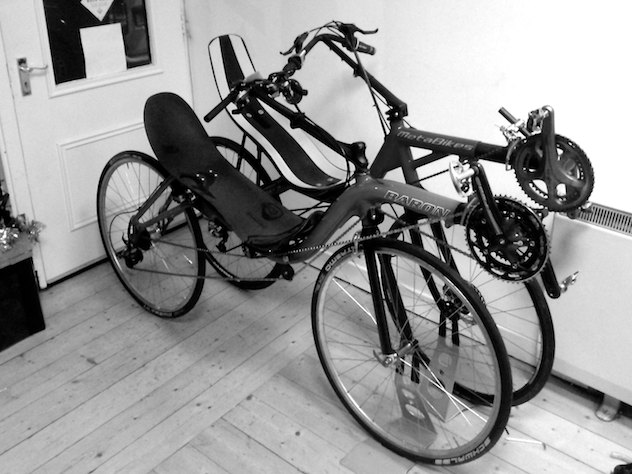 Every recumbent handles differently, and not always in a good way.

Even between these five superficially similar 700C bikes there are major contrasts, and while I believe you can learn to master any bike, that doesn’t make things equal. Plenty of people have shoes that don’t properly fit them too.

That said, I’d be the first to admit that some aspects of bike handling are subjective, so I want to be clear that I’m obviously drawing on my personal preferences here.

The weakest bike by a country mile is the Bacchetta Corsa. The open cockpit interferes with tight manouvering – the excitement of stabbing your thigh into your handlebars while carving round a bollard is… considerable. The huge height of the bike really made it awkward in stop-go traffic and had me scrabbling at the ground with the tip of my shoe on multiple occasions: I’ve written specifically about stick bike seat height issues as a result. 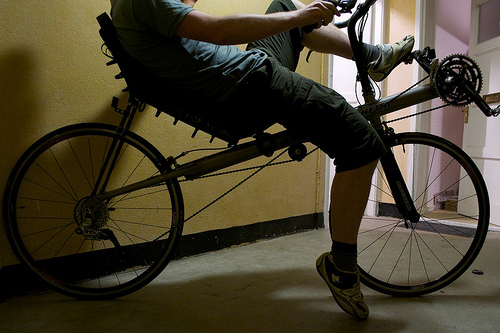 On the open road, the only time I would worry about the Corsa is slow speed climbing, for fear of kicking the bars, while slow speed hill starts might well be impossible. You can get a mini-Corsa on smaller wheels that would presumably help, but then it wouldn’t be eligible for a big-wheel roundup, catch 22…

Both the Gaucho and Raptobike have a much more civilised demeanour and I wouldn’t hesitate to recommend either. The Gaucho’s suspended rear end gives it a very ‘planted’ feel and you shouldn’t underestimate how nice that is when you’re pouring on the miles. I finished Paris-Brest-Paris on the Gaucho with no injuries or discomfort whatsoever (although I did fall asleep while descending the Roc, and found myself bouncing along the verge, still upright!)

The Raptobike does present the danger of mangling your clothes and/or inner thigh on the power idler, and that might be significant for some (I found it contributed to knee issues over great distances). It’s a very direct-feeling bike, otherwise.

The MetaBike is possibly the biggest disappointment I’ve had in recumbent handling.

Having read so much about these bikes taking the BentRider forum by storm, I had pretty much convinced myself I was going to buy the Laid-Back demo the moment it arrived (I’d spent the best part of a year doing trials and hadn’t found anything to replace my RaptoBike lowracer).

Unfortunately I found the MetaBike sharp to a fault – even sharper than my upright DF racer. It just wasn’t a reassuring bike to ride, for me, and this killed the enjoyment that riding such a stiff frame should bring (and believe me, I really wanted to like it!).

With the collapse of Challenge killing off the hugely-anticipated Chamsin SL, I was considering buying a MetaBike regardless and just adjusting my expectations, but at the last minute the High Baron came into the picture. (Challenge are theoretically still in business, but no sign of a Chamsin SL.)

For me, the Baron has almost flawless handling. It corners so assuredly at high speed that it frankly embarrasses most other bikes, while the rock solid cockpit gives you the confidence to pour on the power. Despite being low and stretched out, it still manoeuvres well around tight obstacles, and of course it’s effortless to dab.

Unfortunately there’s a real issue with the Baron’s brakes, especially at the rear. It’s very difficult to get them set up to work satisfactorily, and indeed I still put up with poor braking in exchange for the bike’ great performance otherwise.

Another Scottish randonneur demonstrates that some people will make the opposite judgement (indeed, DarkerSider went on to complete London-Edinburgh-London rather nicely on his MetaBike!)

Unless your own bodyweight is extremely low (say < 160lbs / 70kg), weight shouldn't determine your choice between any of these five bikes. It simply won't be a defining factor in their performance. Since I know you are interested despite my good advice, the Corsa and Metabike lead the pack in terms of how light you can go with unlimited cash. The High Baron trails a little behind, followed by the RaptoBike Midracer and finally the Gaucho. If you need further reassurance, I wrote up a comparison between the High Baron and CA2.0 in weight terms and suggest that, while the difference is real, it’s no big shakes:

Say I was to climb solidly with my long-lost twin for an hour – the version of me on the CA2.0 would nose ahead by around 0.13 miles, or 208 meters. To combat this, the version of me riding the High Baron would need to average 254W instead of 250W (unfortunately this is not much above the 1% quoted accuracy of most power meters, so let’s not take the test to extremes).

Of course, there are reasons besides performance to enjoy a light bike… just don’t overplay it to the point that you buy a bike which is compromised for your needs under the impression that a pound or two will make any real difference to your performance on it.

I made my choice and am now the proud owner of a red Baron… however, that’s not to say that I would recommend the Baron to absolutely everyone.

Perhaps this is a bit of a cop-out, but I really think that a range of riders would make different (valid) choices if they tried these bikes out back to back. Your intended use and personal preferences mean a lot, they’re just hard to score with a single number (unlike the ubiquitous but insignificant weight reading!)

The best thing you can do is get in touch with an experienced dealer who can talk you through your options, and potentially arrange demos.

In this case all five bikes came through Edinburgh’s Laid-Back-Bikes. Get in touch with David Gardiner and he’ll be pleased to help with any enquiries.

Readers may note that, as ever, I haven’t included cost as a basis for comparison. That’s not to say that all these bikes cost the same, but I prefer to avoid misleading specifics, especially to an international audience…