The Origami is a robust, fairly upright dual 20″ recumbent with a really neat, fast and tool-free fold…

The Origami is a robust, fairly upright dual 20″ model from Czech manufacturer Azub.

As the name suggests, the twist is the ability to fold up the Origami into a compact layout, something that many would welcome considering how awkward your average recumbent is to move about, being six feet long and all… 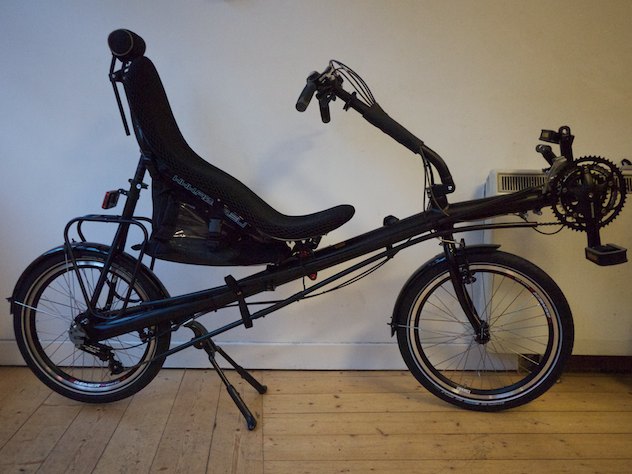 This model appeared briefly in the Edinburgh showroom of Laid-Back-Bikes and I took the opportunity to poke it around a bit… I didn’t take the bike for more than a quick spin however as it was already earmarked for a keen customer.

The build is robust and definitely catering for the utility / commuting market rather than the long distance or speed crowd (although I daresay you could do quite a daily mileage on it if you chose). The general finishing of the frame is of a high standard, the cable routing is good and aesthetically it has a crisp, pleasing look: 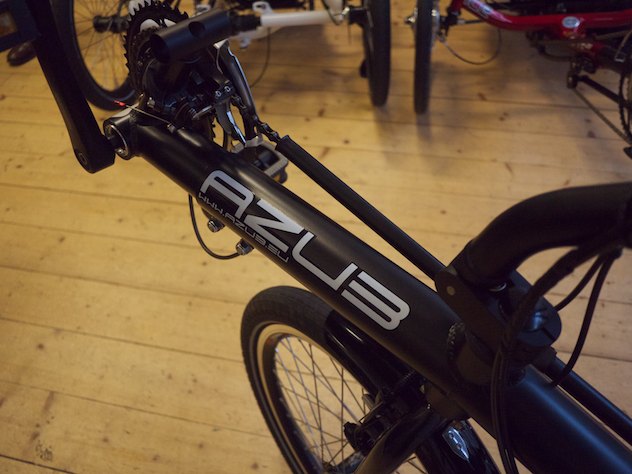 The bars are neat and comfortable, with good quality cabling and trigger shifters for the Alfine hub and front mech. The tiller is a folding one – this is an essential part of the overall fold so you have to put up with the inevitable bit of flex there (but on the other hand, it means you can dismount without turning the bars, as well as folding the bike tight): 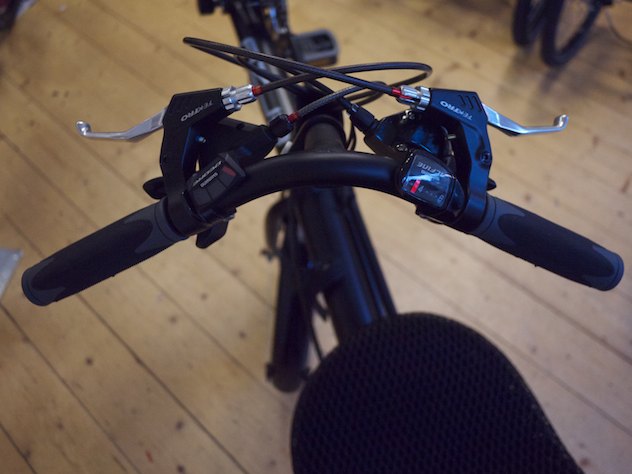 A sturdy twin-leg kickstand keeps the bike stable while you fold and unfold it – it’s also just a generally handy thing for a utility bike to have – no chance of falling over while loading panniers or sitting propped against a wall! 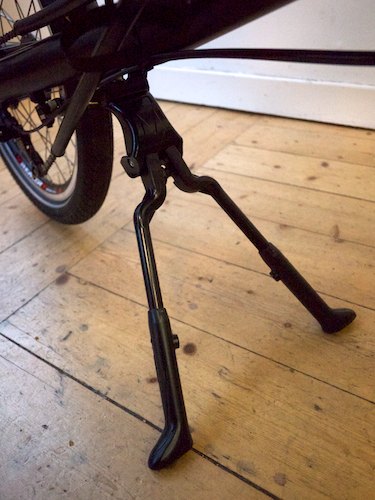 At the rear there’s a sturdy pannier rack. You can also see the telescopic pole that supports the back of the seat (and sets the seat angle) in this pic: 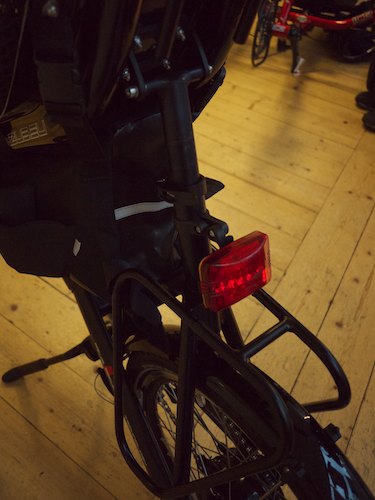 The rear dropout has a split metal bracket attached which forms half of the clever part of the folding mechanism (as an aside, this will also protect the mech from impact if you drop the bike on its right side, something I’ve had the pleasure of doing to all too many bikes): 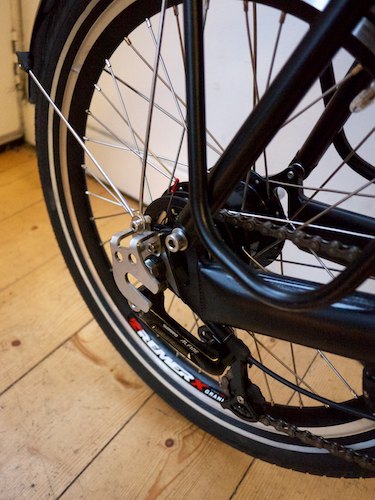 One side of the front wheel skewer features a flat plate that mates with the rear dropout plate when the bike is folded, preventing it falling apart: 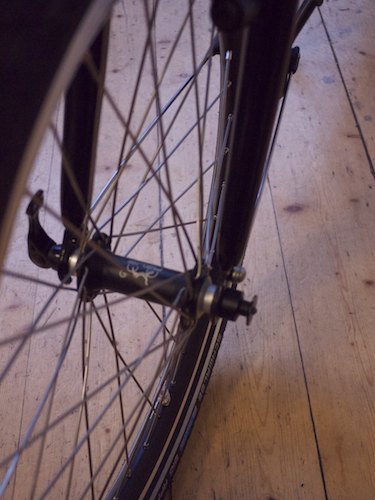 See below for detail of the wheel mating system. This keeps the bike tight when it’s being moved about, and is very effective indeed (as well as fast!): 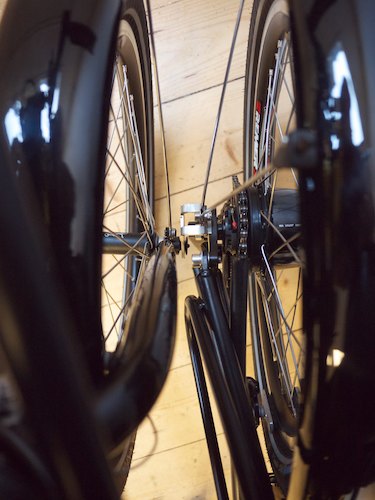 Hinge detail: it’s quite a burly affair so no fear of it coming apart while you’re riding about. Note also the very bling red anodised QR skewers that adjust the bike: 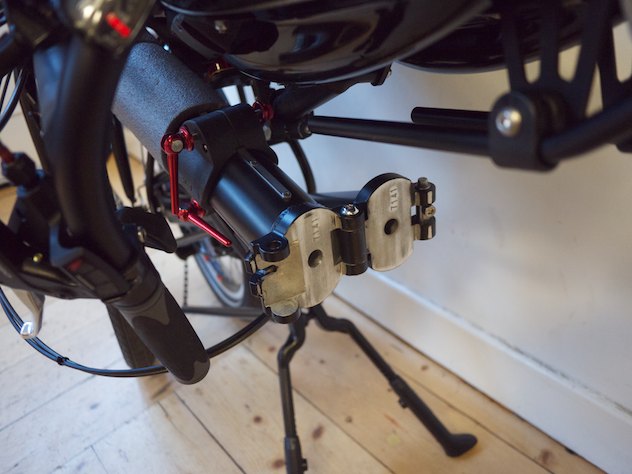 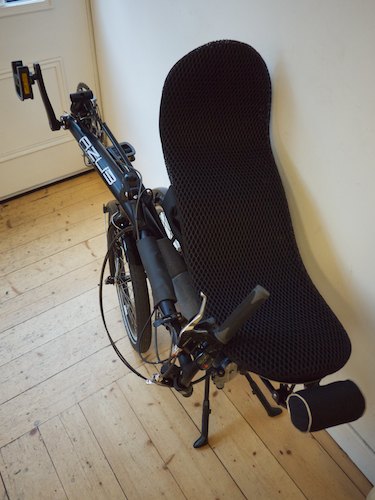 The fold is pretty fast and slick, and importantly tool free; although not without hazard to the paintwork as you swing the seat about (care or practice required!)

I haven’t seen anything to compare with this in the two wheel world – simple and easy enough that you might actually do it on a daily basis (and since you don’t have to carry around the seat separately, I can even see the argument that this is better than the ICE flat fold): 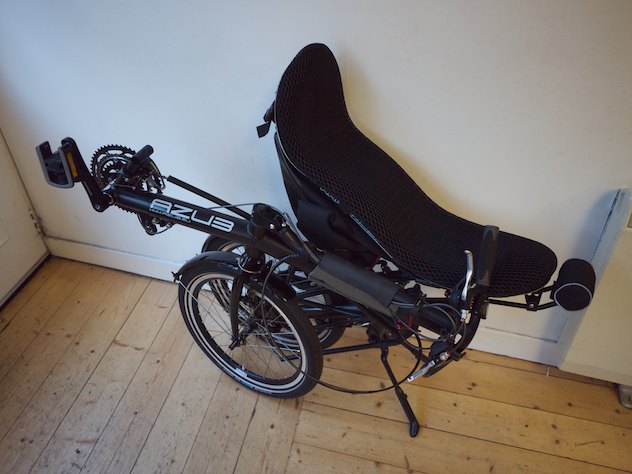 You *might* get this on a train past a suspicious conductor… certainly it would be much easier to get into a variety of smaller types of car!

There’s a strap which keeps the bars tucked sideways against the side of the frame, so they don’t flap around either. 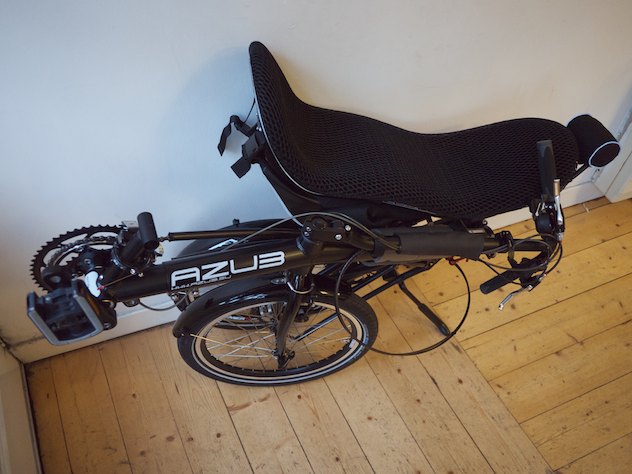 After all that time spent discussing the fold… how does it ride?

The Origami’s relatively short wheelbase makes it very manoeuvrable and the steering is well balanced – you can use one finger to corner and direct the bike around potholes and the like (more than one finger might be an advantage should you prefer to ride through them).

The wide gearing shifted quickly and without fuss. I’m not totally convinced about the longevity of any hub gear (long story…) but that’s hardly a recumbent-specific issue. This model was just fine when I put it to the test.

Speed-wise it occupies a similar part of the spectrum to the Bromptons of the upright folding world – it won’t set you on fire (or perhaps: if you’re on fire, you might not be able to ride fast enough to put it out!) but it’s not offensively slow for a utility bike by any means.

I found the ride to be comfortable enough, if not plush – but take that with a pinch of salt as I didn’t ride for many miles at a time as you’d need to to expose that sort of issue (possibly you wouldn’t either?)

At the end of the day you’ve probably got some pretty specific requirements if you want a folding bike and the Azub’s excellent fold does put it at the top of the leaderboard in that respect. The pleasing handling is a bonus 🙂 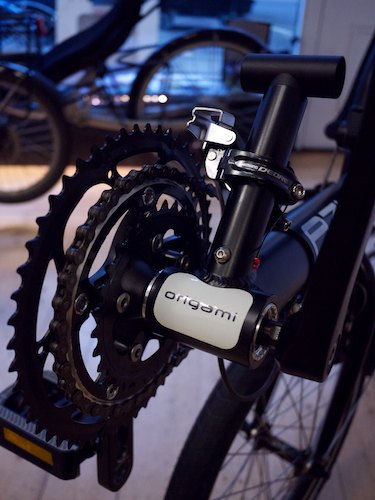