Why are we obsessed with the idea that brighter is better?

First, forgive me – put your driving hat on! Do you think the safety of your car could be improved if you drove around town at night with your high beam headlights?

Probably you’d agree that this would be counterproductive (and nobody does it).

So let’s think about the back of your car. Would you drive around town at night with your rear foglight on because you felt it made you safer? No (and again, nobody does this). 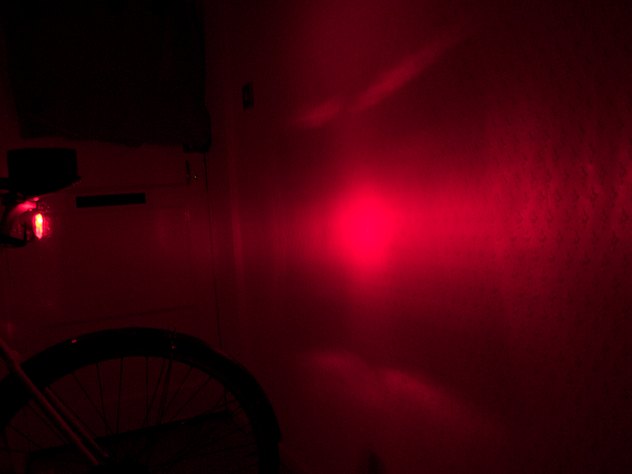 What about traffic lights? Making them twice, five times or ten times brighter than they are? (Maybe we could recycle the bulbs from car foglights when they’re scrapped to make traffic lights really hard to miss?)

You’ve probably figured out that I’m asking why we don’t seem to apply the same logic to the back of our bikes. There, “the brighter the better” seems to be the rule of the day, and it’s interesting to wonder why.

Rise of the dynamo

From 80’s “never-readies” to the current age of laser death beams, I’d always gone with the flow and bought successively brighter and badder lights for my bikes.

That is until I decided to go for a dynamo when I got into audax a few years ago.

Instead of packing multiple 1W LEDs, in dynamo tail lights you have a design which burns a mere ~50mW (0.05W) and has some clever focusing or diffusing technology. I admit I was unsure – my commuter at the time had three separate Smart Superflash LEDs on the back.

But after countless thousands of miles in all weather and all conditions, from urban streets in rush hour and pub closing time to deserted glens, I’m more or less convinced that drivers can see dynamo tail lights.

In case this is starting to sound like a dynamo commercial… there are lots of great reasons not to use a dynamo!

It’s just that the visibility of the nice steady tail light simply isn’t one of them. 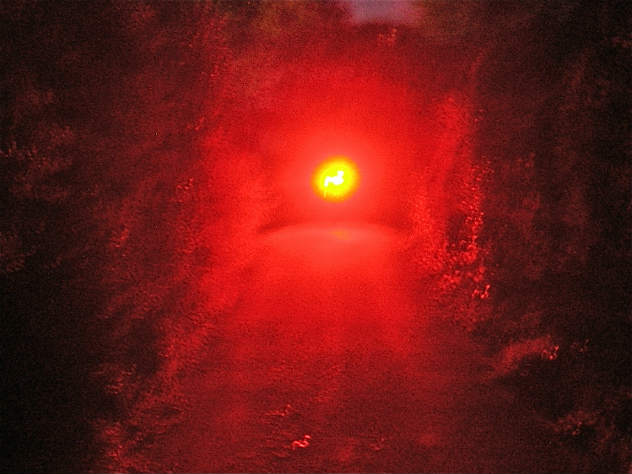 Official product shot of a 500 lumen tail light “in a country lane at 20 metres”. Good luck judging anything as you overtake…

Despite all the obvious counterexamples, people definitely seem to think that brighter tail lights are safer.

A quick Google and you’ll find such gems as “SAVE YOUR Life, Ride Ultra BRIGHT, DAY And night” … followed up by “If you can look directly at the light, it’s not even close to being brite (sic) enough”.

Not only do I disagree, I think that running an epic tail light is actively reducing your safety on the road.

I was driving through Edinburgh recently at dusk when a rider joined the road up ahead. I was some way off, so he was perfectly safe jumping on, and he proceeded at a reasonable pace. Maybe it’s just been a while since last winter, but I found his rear light to be ferociously bright – just painful to drive behind.

Rather than wait behind as we came up towards a pinch point for a railway bridge, I found myself dropping a gear and accelerating hard to get past. I didn’t cut it too fine, but since this is my commute I know that I’d have been shaking my head.

Inevitably, I had to queue to turn right at the T-junction ahead and after maybe twenty seconds the rider had filtered past and I was being blasted by the red howitzer once more. I’m not sure of the brand – it had a regular flash going on but also an off-tempo nuclear strobe effect.

What happened to this rider with the ultra brite light on the next bit of open road?

Let’s just say that neither of the drivers in front of me wasted any time in ripping past him as he climbed the shallow gradient, even though it was tight with oncoming traffic. Neither did I, and neither did any of the cars I caught passing him in the rear-view. I’m probably the only one who felt guilty about it, too.

If this guy bought his light on the basis that it would make him safer, then he really ought to ask for his money back! 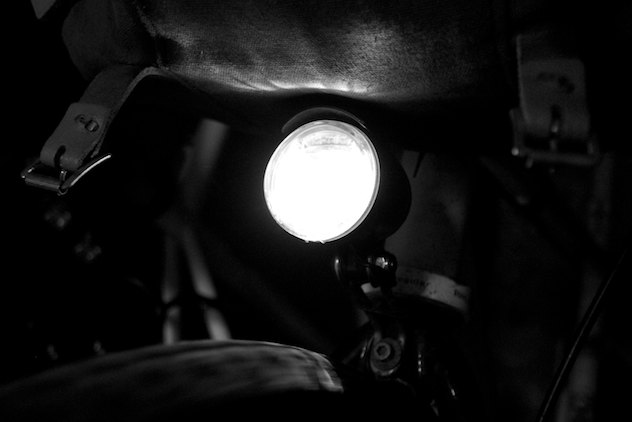 A headlight. It is not a tail-light. There are big differences!

There is an optimum brightness for safe riding.

A tail light just needs to be bright enough that motorists notice you (and can account for your course and speed). You blatantly don’t need an atomic tail light to achieve this – just look at the huge number of cyclists who have either no lights at all or the bare minimum.

While I’d never advocate it, casualties from the practice are astonishingly low. If you pop out in your car, you’ll quickly reassure yourself at how easy it is to spot riders with even pretty pathetic tail lights.

After that you’re relying on goodwill, and who ever thought that brighter lights create goodwill?

There’s a strong argument for brighter headlights in safety terms, but tail lights aren’t headlights and there is a vital difference between them.

When you increase the power of your front light, you are incentivising other road users in a way which promotes your own safety – motorists in oncoming vehicles (and those at side streets) have to actively decide that you aren’t as big as you look, and to actively decide to put themselves into your glare when waiting for a couple of seconds puts you out of the way.

Uber tail lights also incentivise other road users, but they do not do so in a way which is beneficial for you. Drivers who find your light unpleasant are rewarded the faster they get past you, and it’s no secret that other cyclists don’t like riding behind Joe Death Star.

Conversely, do you really think that taxi drivers who cut past you in the city’s bus lanes would decide to be more responsible if only you had more photons at your disposal? They’re actually deciding based on a layman’s knowledge of bike lighting that you do or don’t deserve a legal amount of space? Really?

No, it’s simply faulty thinking to imagine that a brighter tail light will get more attention and more consideration from other road users.