Extremely bright and benefits from respectable runtime, the Lunar R2 is also fairly well built and not overly expensive. A good all-rounder.

The Smart Lunar R2 is a small (AAA) rear LED in the clip-on tradition. It benefits from superior construction quality relative to the infamous Smart Superflash 0.5W LED light, but at greater cost.

Currently Wiggle have it on a 10% discount, while Chain-Reaction are doing a respectable 20% off.

This has actually been pretty useful, since I’ve been able to check the performance of the Smart Lunar R2 in different circumstances while riding along behind, instead of so many bike light reviews which boil down to “it seems bright and nobody has run me over yet” 😉 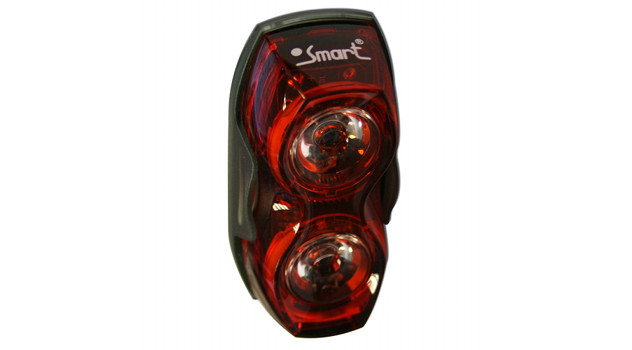 The Smart Lunar R2 has a clip on the rear which allows you to attach it to items of clothing, bags, and so on.

The ability to mount on the seat stays means you should be able to find somewhere for the Smart Lunar R2, even if you have a short seatpost or use a seat bag. Don’t worry that the spokes will obscure the light from drivers on an inside lane – in reality they’ll have spent plenty of time being lasered getting into that position.

The Smart Lunar R2 has five modes – a variety of flashing patterns as well as solid mode. In much the same way that you don’t worry about how many modes your car lights have, I’m a bit “meh” about anything other than plain old “on then off”…

Both LEDs have a plain lens (compare with the RSP Astrum’s diffuser lens). Visibility is still good from all angles and the Lunar R2 throws so much light downwind that you can be picked out minutes away on the open road…

The R2 is extremely bright – so bright that it’s unpleasant to ride or drive behind someone using it, especially in flash mode. While this may be great in some circumstances, making it unpleasant for people to drive behind you can definitely encourage them to overtake. As a driver, I can vouch that sitting at light behind someone with a mega LED flasher definitely focuses my mind on getting past!

It’s a difficult balance to strike. When driving I often find it quite difficult to work out the speed and course of a cyclist using a flashing light, so I recommend solid mode. (This is less of an issue under street lights.)

It’s important to mount the light completely level, as designers depend on this when working out off-angle visibility and other factors. Do not point it at the ground in lieu of just buying a less dazzling light!

That said, you can safely ignore anyone who says flashing lights aren’t road legal – this hasn’t been the case for about a decade.

Because the Smart Lunar R2 hasn’t passed the relevant tests it isn’t road legal when used on its own (in any mode).

The Smart Lunar R2 has a small end-on button that isn’t the easiest to operate. It works more like “press in part of the body” than the distinct, super-positive rubber button you’ll find on many Cateye and Raleigh RSP lights.

It has a simple “press for next mode” (including the “off mode”) which makes it straightforward to change on the fly whilst riding. The large number of modes makes it slightly more tricky to switch off as you need to count just the right number of clicks.

I bought two Lunar R2 lights from my LBS around two and a half years ago. One of them failed (bounced off on a pothole and run over) but the other is going strong.

We get around the stated battery life (50 hours flashing, 25 hours solid). Remember that the temperature at which you use the light and the type of battery used both influence that figure.

The Smart Lunar R2 produces quite a lot of light and so is fairly battery-hungry.

The Smart Lunar R2 is reasonably sealed, given that it’s lasted three winters.

The internet is less sure, with quite a few reports of water ingress. While I agree that the sealing could be better, we’ve never had a problem with our lights in pretty foul weather (although we do use mudguards).

The Smart Lunar R2 2×0.5W rear LED light is a solid effort – it’s much better built than the cheaper Smart Superflash 0.5W LED, although perhaps not as well built as some competitors (especially the mount, which is competent but not outstanding).

Again, Wiggle currently have it on a 10% discount, while Chain-Reaction are doing a respectable 20% off.