You need to have pavements before you can even consider addressing other reasons people don’t choose to walk. Why do people think cycling is any different?

Infrastructure is not sufficient, but it *is* necessary

What lesson should we really draw from Stevenage?

Hang around cycling blogs for any length of time and you will inevitably come across a variation of the argumentum ad Stevenage.

This “dull grey 1950s new town” (waronthemotorist) is a fantastic place to drive: dual carriageways combined with high volume roundabouts make it pretty effortless to motor from A to B (a more local equivalent would be Livingston – it’s hard to believe Stevenage could either be more drab, have bigger dual carriageways or have a lower cycling modal share). 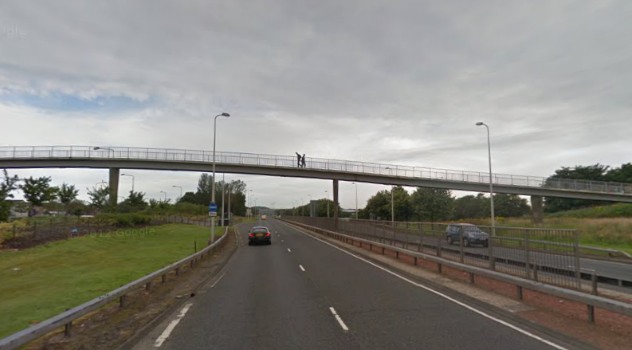 Central Livingston. The bridge is a segregated cycle facility, but who would feel the need to use it?

Stevenage also has a relatively extensive network of segregated cycling infrastructure – and a dismal proportion of journeys being made by bike.

It’s this combination that has led to Stevenage enjoying (along with Milton Keynes) the dubious honour of becoming the go-to argument against infrastructure provision. Literally “we built it and they didn’t come”; the reader is invited to draw the conclusion that infrastructure has at most a small contribution to make to cycling uptake and potentially none at all – it’s just an expensive distraction.

There are all sorts of debates to be had about exactly why Stevenage (or any given piece of infrastructure) may, after construction, not enjoy the level of modal share that we might wish.

There’s not much point picking just one of these things to squabble over.

It should be obvious to everyone that building cycle infrastructure will not necessarily cause a large proportion of people to give up driving and take to two wheels instead. However, it’s critical that all campaigners (and campaign groups like the CTC) understand that insufficiency does not speak to necessity.

There’s nothing more discouraging to me than someone who argues against (or downplays) hard segregated infrastructure for one simple reason:

Rather than pointing to Stevenage (or Milton Keynes, or wherever) as places that have infrastructure but no cyclists, I’d love to see just one example of a place with widespread cycling uptake but no infrastructure.

It’s tempting to be fooled by recent London surveys pointing to modal shares of 50% or more on particular streets, but that is not comparing apples with apples, since it doesn’t include the huge proportion of journeys Londoners make on the tube, for example, and only a small proportion of roads.

It’s not even clear to me whether the figures count the movement of people or merely the movement of vehicles. (Any argument which relies on giving one chap on a Boris Bike equal weighting with eighty people on a double decker is immediately suspicious).

Regardless, the fact that transport provision in some of our inner cities is so horrendous that people are compelled to cycle despite the risks is no recipe for success anywhere else (“London is not Britain” – in fact, innermost London is not even “London” – the English capital’s modal share is still dismal overall).

“If you build it they may not come” is a true (and trivial) statement. There are lots of reasons not to let your kids cycle to school, besides the risk of being ground to a pulp. But even if you overcame all other issues, if your kids may well be mown down by a dangerous driver, that’s the ultimate blocker.

I’m not sure I would let my kids cycle to school in Stevenage either. However, without segregated infrastructure there would be no chance whatsoever.

Retrofit is not new build

In Stevenage and the other new towns, bike infrastructure was built alongside fast and convenient main roads and, although necessary for cycle use (imagine cycling to school on one of these de-facto motorways) it has not proven sufficient for a high modal share – there is no demand for travel any other way.

In contrast, almost anywhere that cycle infrastructure is retrofitted in 21st century Britain, significant latent demand for cycle use exists, thanks to the terrible experience that is travelling by car (or public transport) in most other places.

The reason that explosive growth on Edinburgh’s segregated facilities hasn’t translated into a high overall modal share is correctly understood as a simple lack of segregated facilities (which can be highly utilised only where they exist) and not that Edinburgh residents have the choice of riding off road but simply choose to drive regardless.

It takes me 30-40 minutes to cycle to work versus an hour in the car and up to 90 minutes by public transport. No smooth-flowing dual carriageways here.

A better analogy of segregated cyclepaths is pavements. It’s easy to point to a town or city with lots of pavements but a low modal share of journeys on foot, but few would try to convince themselves that pavements are anything other than a necessity for any significant level of perambulation. You need to have pavements before you can even consider addressing the other issues around people not choosing to walk.

Build it, and they can come if they want to. But if you don’t build it, they can’t.

This, at least, is straightforward.