Do cyclists who ride on de-facto motorways have to accept some responsibility if they are run down?

Discussion rages on YACF following the recent deaths of two local riders on an End to End attempt.

I have to admit, slightly uneasily, that when I hear of deaths on the A30 they don’t surprise me.

I have ridden on the A30 (and have quite a lot of experience of riding on trunk roads, including some of the A1 and the A9, the A5 and the A6). On my own End to End attempt some years ago I planned to ride on the A30 for a whole day, but considered it too dangerous when I got there, and took one of the alternative roads instead. 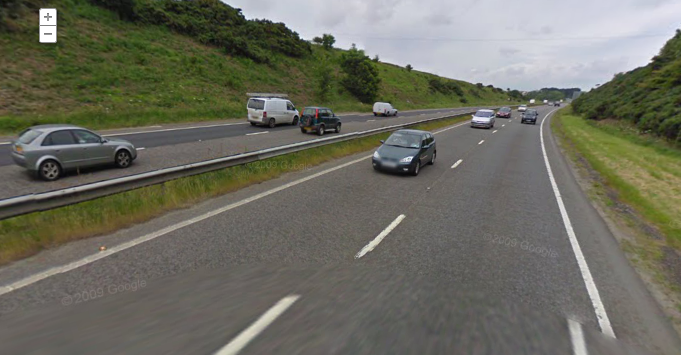 Many of these dual carriageways are physically just like a Scottish motorway, but without the hard shoulder and variable speed limit that you’d “enjoy” as a cyclist on the motorway.

Vehicle speeds are just as high (possibly higher on the A-roads due to reduced enforcement) and traffic volumes on many English A-roads are higher than Scots motorways, in my experience.

It’s hard to imagine many cyclists (even John Franklin) seriously advocating riding on a motorway. Yet there is still a serious discussion about whether people have a responsibility to ride on roads which are identical to motorways apart from the colour of the signs, to preserve cyclists’ de-facto “rights”.

We generally consider cycling on the motorways to be ill-advised on safety grounds, rather than just because it’s the law. The obvious example of stretches of dual carriageway which are upgraded to motorway by making them wider (and thus safer for cycling) is a serious obstacle to the argument that riding on dual carriageways is otherwise OK.

Given the circumstances I won’t dwell on this, although it’s extremely unlikely that anyone related to the recently deceased will also be a reader of my blog (and equally unlikely that such discussion will become more palatable to them after any time period).

Do cyclists who ride on de-facto motorways have to accept some responsibility if they are run down? I’d welcome any thoughts in the comment box below.

2 thoughts on “Death by trunk road”