Because drivers always use their left indicator… right?

It’s old news that the chief cause of serious injury or death amongst cyclists in an urban environment is being caught on the inside of vehicles moving or turning left. Rarely is fault attributed to the driver, despite their self-evident failure to ensure their nearside was clear before manoeuvring*.

As part of a new series of articles I decided to perform CCTV junction monitoring using my HD headcam in central Edinburgh.

The first aim was simply to get an idea of how often motorists actually advertise their intentions in a situation where there is a clear need to indicate: changing from the right lane to the left lane, where cyclists are often to be found. 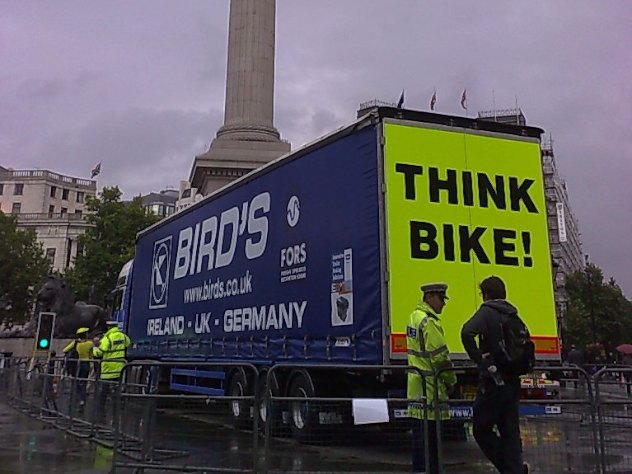 I picked a busy main road junction with a bus lane almost to the lights, but which has a (rarely used) right filter, to ensure a reasonable sample of motorists changing lane. Recordings were made over two rush hours on consecutive days.

Only a short sample of footage was captured on each day as a proof of concept, but the results are already quite startling:

Just under 4% of motorists changing from the right to the left lane at this busy junction used their left indicator, including 0% of bus drivers.

For much of one observation period the bus lane was blocked by an illegally parked motorist. Surprisingly, none of the Lothian Buses observed during this period signalled left to re-enter the bus lane, even though it would have been easy (given the low traffic speed) for multiple cyclists to pass the parked car and end up on the inside of the driver’s vehicle.

The high fatality rate of left-moving vehicle incidents makes it difficult for investigators to determine exactly where fault lies (unless a camera is worn – see Video Protection On The Roads). However, the idea that these collisions happen due to cyclist negligence despite the best efforts of the driver is certainly not supported by observations such as these.

It’s probable that motorists are a little better at indicating when they actually turn left, but this junction had too high a proportion of straight-on traffic to get a significant sample.

I will follow up with video monitoring of vehicles which actually turn left, taken over a longer period at another suitable junction.

Also, the reader should be aware that one junction on just two days isn’t exactly cast iron evidence (although I have no doubt that long term monitoring would give the same sort of outcome).

* There are (at least) two recent local examples, one where an academic riding to the University of Edinburgh was crushed by a left-turning Neil Williams Haulage truck, the other when a left-turning Edinburgh Council bin lorry crushed a young man on his way to work: both in broad daylight. I’m not aware of the driver of either vehicle being charged with any offence, but of course it’s possible this was not reported. Whether those drivers would find themselves in the 96% who don’t indicate or the 4% who do is purely speculation.

2 thoughts on “Traffic surveys: left indicator use (I of II)”