Pulling vs sitting in, measured in watts

I recently took the opportunity to record some power numbers on the drafting advantage while cycling in a small group on a brevet in southern Scotland.

Because I already have good power figures for my racer (via PowerTap hub) on the flat in calm conditions, it was a neat contrast to do the same on a real road, with a headwind, as part of a group. 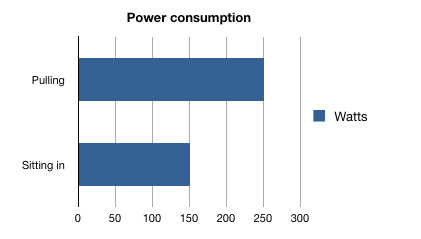 Although the conditions were not controlled (the road was rolling and the wind wasn’t constant – neither was the speed or effort of the group), it was a steady enough effort that I feel confident presenting it here. Average speed for the leg was ~18mph.

The headline figure is that riding at the head of the line cost about 100W more than sitting in (i.e. 250W versus 150W). Drafting is a huge advantage when cycling!

From these power figures we can calculate the overall saving in energy from a prolonged period of riding co-operatively. An hour at 250W requires more than 900kcal; even riding in a pair (for a total of 30 minutes on, 30 minutes off) reduces this to 720kcal: 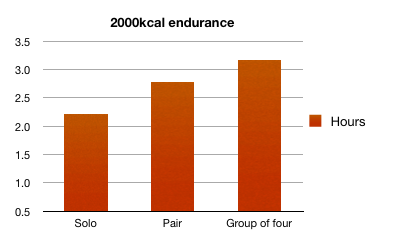 Riding in a group of four drops it right down to 630kcal – or expressed another way, compared with a solo rider you will get one hour of progress down the road “free” with every two hours you put in.

The graph above shows the endurance duration of a rider in different scenarios; I chose 2000kcal somewhat arbitrarily because it approximates how much glycogen your body stores in muscles and liver.

“Buy two, get one free” is a huge advantage over long distances. While no cyclist needs to be told that drafting works, it is interesting to see by just how much!

No wonder even a loose group can make real headway…

An aside on recumbents

I haven’t yet had the chance to collect decent data on pulling versus sitting in a group on a recumbent.

However, I do find it interesting that when I tested the RaptoBike midracer against my road bike I found approximately a 100W aero advantage at these speeds (150W giving 19.4mph recumbent, where 250W gave 19.6mph upright).

One thought on “Cycling drafting advantage”