The Council is proposing a broad-ranging and ambitious revamp of Princes St and George St, to include segregated cycling on George St… but nothing on Princes St.

City of Edinburgh Council’s Transport and Environment Committee is about to agree “in principle” with a broad-ranging and ambitious plan to help regenerate the city centre.

The key proposal is to turn Princes St and George St into a gyratory, re-allocating the space created by the removal of running traffic in one direction on each of those streets to pedestrians and cyclists.

In general I applaud the proposal which goes far further than I think many people would have expected from this Council (which has distinguished itself, fairly or otherwise, by what seems to be an unhealthy fear of the Evening News). 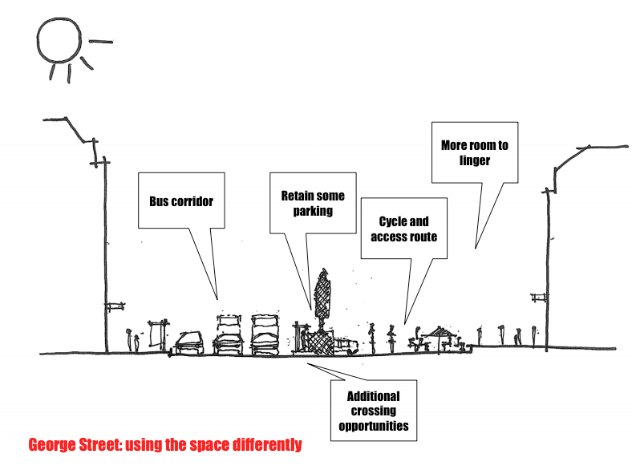 However, while segregated cycle provision both ways along George St will be epic, the plan fails to offer the same on Princes St. Instead, cyclists who wish to use this direct route (avoiding the many junctions along George St as well as additional junctions at either end) are to be effectively banned eastbound and left to struggle amongst the fleet of buses and taxis jostling to travel westbound.

Princes St (like Leith Walk) is enormous, and there really is no plausible reason why two-way segregated cycling cannot be provisioned.

I’ve written to my councillors ahead of Tuesday’s meeting to ask them to support Spokes’ call that the proposals which go out for consultation include two-way segregated cycling along both streets.

In case you need inspiration:

I am writing regarding “Building a Vision for the City Centre”, ahead of Tuesday’s meeting of the Transport & Environment Committee.

On the whole, I find these proposals very encouraging, but I have one major concern – I think it’s vital that the council also supports two-way segregated cycling on Princes St.

It’s particularly pleasing that the council continues to recognise the vital importance of separated cycle provision to get people into the city centre to work, shop and play. It’s obvious that the hoped-for high quality segregated route up Leith Walk would become doubly valuable with onward high quality segregated connections through the city centre – and vice versa.

This is the only way the council will get even close to its commitment on changing modal share.

However, a fundamental prerequisite of successful active travel provision is that it must be both direct and reliable. For a large proportion of cyclists this means Princes St – it is never shut for events for any significant period (unlike George St), and it involves a minimum of junctions (key hazards).

There are so many extra junctions to negotiate with a detour along George Street, not to mention extra crossings of the tramlines, that I think the Council will find significant numbers of cyclists continuing to struggle along Princes St (and potentially cycling “illicitly” eastbound and/or westbound using whatever space is created from the current eastbound lanes anyway). A recipe for conflict and lost potential.

I note that at this stage the Committee is only being asked to agree “in principle” with the proposals and to agree a consultation plan. In my opinion the Committee should offer vital guidance at this early stage that it expects to see an option including two-way segregated cycling on Princes St put out for consultation.

I’m sure I’m not alone in expressing these concerns and would appreciate it if you felt able to support this (or at least to pass this on to the relevant people).