Did you know that many dynamo bike lights can be powered quite happily by ordinary DC batteries?

It’s only recently that manufacturers have finally started producing battery-powered lights with asymmetric reflectors, so you aren’t riding along spraying half your photons up towards the International Space Station.

The Busch & Müller Ixon IQ (£70) was the first decent effort that I’m aware of, and more recently the catchily-named Philips LED Bike Light (RRP £110) and the Supernova Airstream (an eye-watering £170). If you already own a decent dynamo headlight, however, or are too just cheap to pay a lot of extra money for a proprietary holder with re-manufactured lithium rechargeables inside, there is a third way.

My headlight for 2011’s Paris-Brest-Paris and qualifying SR series (and for commuting through Edinburgh city centre) is the plain old B&M IQ Cyo. I bought it brand new for £35 online, and immediately set my mind to making it work with DC power, as at the time, I owned no dynamo.

B&M do advise that this can be done – it wasn’t completely heroic. In the end it required no great trickery. Wire the tail-light connectors of the Cyo into a plug that will fit your battery of choice, and switch the battery on. Shazam!

I’ve used several different battery solutions now – the 8.5V Li-pol rechargeables from my original Ay-Up mountain bike lights, a 7.5V radio control car battery, and most recently (for PBP) a simple AA battery holder, which I bought from Maplin for a couple of pounds. I tested this successfully with up to 6AA lithium primary batteries (a shade over 10V) and it was quite content. You don’t get the same light output from rechargeable cells as you do from a proper dynamo, especially at lower voltages (I would want to use seven NiMH AAs, as they’re only 1.3V a pop). Also, importantly, one polarity of connection to the battery will be much brighter than the other, so test both. I’m not sure if there’s any ill effect of riding with the battery the “dim way around” but what would be the point?

However, that’s just the beauty of this set-up. You get stupendous battery life – I rode 1200km / four nights of PBP on just one change of AA cells – while the asymmetric reflector ensures that the available light is distributed in such a way as to make the most of it.

The current draw of the light (and hence both the brightness and the battery life) is strongly linked to voltage. At 7.4V my Cyo draws 190mA while at 8.2V it draws 290mA. At 9.8v (6AA lithium primary cells) it draws 500mA, which is nominally what it draws from a hub dynamo.

It’s easy to convert current to battery life for a battery of any given capacity. For instance, the 2100mAh LiPol batteries from my Ay-Ups will drive a 290mA light for ~7h15m (capacity / draw, or 2100/290). A cheap NiMH 6-cell pack will drive the lights for a healthy 12 hours – enough for two summer nights of near-constant use.

While clearly less bright than the lights of some (for instance, I have a 900 lumen torch from eBay), it is still a serious bit of kit. It allowed me to ride over 30mph in the middle of Normandy at 3am, which is good enough for me… if you want to go off-roading, you’re not reading the right article! 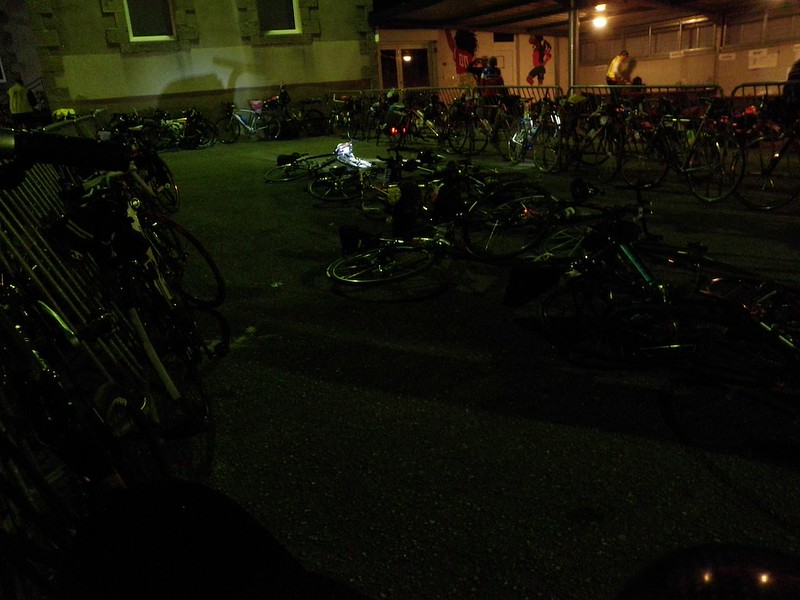 In fact I doubled up on PBP and wired my Ay-Up MTB LEDs into the same circuit (using a different switch) so that if I did need extra light, I could temporarily flick on a ‘high beam’.

Most of the use this second light saw was just to economically “encourage” sleepy randonneurs into the side of the road (the big light overhauling them from the rear had a very useful effect).

As a bonus, I was able to run my dynamo taillight quite happily from the same battery, so I had a complete solution to my lighting needs with just a handful of AA batteries (don’t rely on being able to buy any on PBP though – other randonneurs may have clear-felled the battery landscape for miles around!)

If you’re interested in this, there is a pretty detailed discussion on the YACF forum about my experiences, including a few false starts, false stops, and general befuzzlement.

Bottom line: your B&M dynamo light isn’t just limited to bikes with dynamos, and it might even be one of the smarter choices out there for an ultra distance battery light!