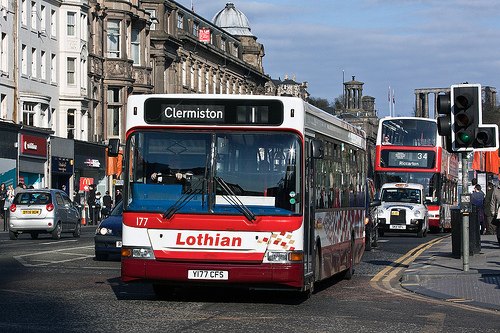 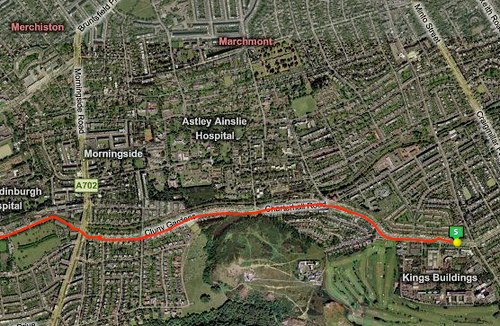 While the consultation was underway, I caught the number 38 from the top of Esselmont Road west to Slateford at the back of 7pm – outside peak time – using a GPS system to measure exactly how long it travelled at any given speed. The results were as follows:

Based on that GPS trace, should a 20mph limit have been put in place all the way from Cameron Toll to Slateford it would still only have “cost” the number 38 a paltry 24 seconds. Since much of the journey was spent at red lights, it’s likely that the bus would have spent most of that 24 seconds getting to the back of queues later and spent 24 seconds less waiting at them.

As only 1300m of the number 38’s route would actually have been affected by the South Central 20mph pilot, the actual ‘threat’ to the route was a trivial 7 seconds – about how long it takes for an extra passenger to board at just one stop.

Nevertheless, the South Central 20mph Pilot was duly watered down and very few meaningful roads were included (West Saville Terrace and Ratcliffe Terrace are the only ones that spring to mind. Indications are that around 50% of vehicles now travel at 20-25mph, which is extremely positive for a speed limit zone that was almost free to install on 30 miles of urban roads, and is never enforced).

Proposals for the regeneration of Leith Walk noticeably failed to build in any significant improvements to the pedestrian or active travel experience, not least because they maintain the “Walk” as a 30mph four lane expressway (it has been proposed, half-seriously, that we rename it to “Leith Drive”).

Today I had the opportunity to instrument another Lothian Buses service, again at around 7pm after the end of the evening rush. This time it was the turn of service number 7, which I monitored for the length of Great Junction St, Leith Walk and up onto North Bridge. 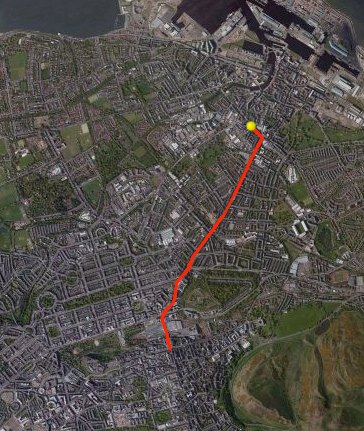 Surprise surprise, it hardly went above 20mph at all, even though the road was largely empty:

So, from Great Junction St to the Royal Mile, outside of rush hour when traffic is flowing pretty freely, a 20mph limit would cost Lothian Buses something on the order of 9 seconds. I suppose two extra people getting on at a stop would add up to just about the same amount?

Of course, again the bus spent much longer than 9 seconds waiting at red lights (it was stationary for 5 minutes and on the move for 7min 38s – although much of that is setting down at stops).

If the council ever dare to consult on a 20mph limit on Leith Drive Walk, I certainly can’t see any reason for Lothian Buses to complain.

In fact, last summer Cllr Eric Barry helped me to establish, extrapolating these results using his own figures, that a citywide 20mph zone might increase required bus capacity by as little as 0.05% (for more backstory on this, see CityCyclingEdinburgh).

If anyone has GPX traces of city bus journeys they’d be happy to share, I’d love to run the same analyses – drop me a comment! 🙂