Nazca have produced a remarkable bike in the Quetzal, combining fantastic features and build quality with critically acclaimed handling.

Ingenious tandem will fold, split or adjust to any situation

There are few recumbents in the world and fewer tandems, so there really aren’t many recumbent tandems! With their latest model, Dutch manufacturer Nazca are taking this niche head on and seem to have struck gold at the first try… 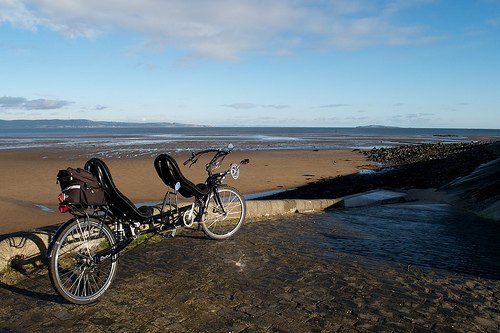 The Quetzal oozes quality and is clearly a labour of love, from its impeccable manners to design highlights like the dual rear shocks and the ingenious stoker BB (which slides on the triangulated main frame member): 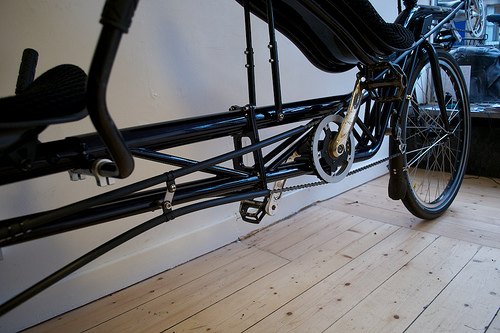 It can easily be ridden solo but the ride comes into its own when laden as intended – the Quetzal is a very solid and confidence-inspiring bike, vital when you are responsible for another person as well as luggage for two! 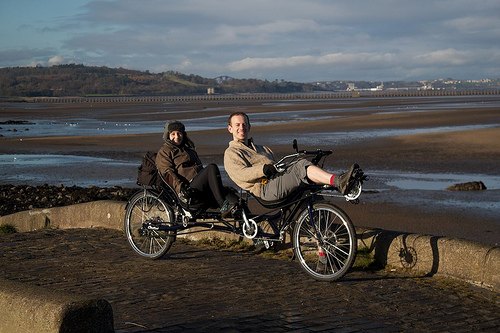 From the rear, the Quetzal offers an all-round excellent view and the optional freewheeling cranks give the luxury of choosing whether to pedal or not (ssh!) although if you do, the captain must pedal too! If the bike isn’t hard to pilot, it’s positively relaxing to stoke – if you can’t sell your significant other on laid back riding with this, nothing will! 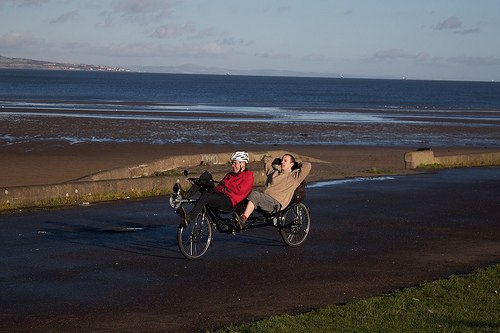 Rear suspension and 26″ Big Apple tyres give the Quetzal the ability to float over poor surfaces, but despite that it’s very brisk on the flat – two riders in an aerodynamic position can make life very difficult for more conventional companions, including those on solo recumbents… 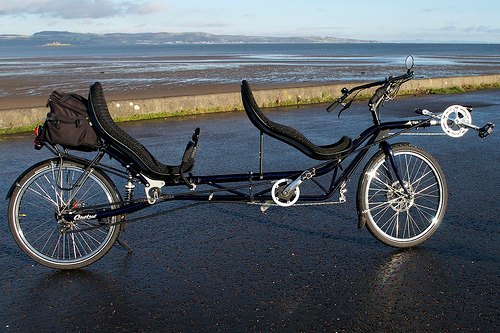 I haven’t yet had the pleasure of trying serious hills on the Quetzal but when the road turns up it seems similar in performance to a solo recumbent trike – you just have to spin away. The bombproof Rohloff Speedhub provides a 526% range (enough to take you from 3mph at 50rpm to 30mph at 100rpm).

With a rack rated for 30kg / 66lbs, the Quetzal is off to a good start on the load-carrying stakes before you even consider adding another set of panniers (or 70L Radical side panniers) using the optional lowrider racks.

For me (5’10” height, ~43″ x-seam) the Quetzal is almost the perfect height for controlled stops and starts. The wide handlebars give you a huge amount of leverage and, where I dislike the “u-bar stabbing the thighs” aspect of this cockpit during sharp turns, holding the loaded tandem up with one foot and making slow manoeuvres with all that momentum is not a great challenge.

I did have to take two or three solo attempts to get my eye in, but in the time you’ve spent reading this article so far, I was able to load the Quetzal with an unfamiliar passenger and ride it away from a dead stop with one push on the pedals – it really is excellent.

See below for a video shot by David Gardiner of Laid-Back-Bikes. Before the camera rolls I’ve genuinely only been on the bike for a few minutes:

As mentioned, the tandem rolls along beautifully on the flat. While the Quetzal will never feel like an all-out racing machine, I know from trying to follow while keeping up one end of a conversation that it can put the pain down on solo riders quite effectively.

When turning, the immense stability of the Quetzal makes it seem like it can’t fall over however hard you lean (understandably we didn’t put this to the test!)… you just turn the bars and let it make a stately about-face. A two-lane road (without parked cars) is enough for a careful u-turn for a novice, so you could probably go tighter as an experienced rider…

The Nazca Quetzal features burly 36 spoke front, 48 spoke rear wheels and the 2″/50mm tyres are the first line of offence when it comes to ride quality. This is backed up by a double rear shock which keeps the back wheel grounded at all times and will vastly increase durability with heavy touring loads: 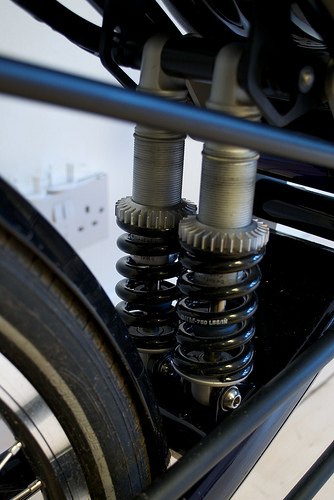 The ride is extremely smooth, even with two riders and a badly filled trench…

The Quetzal is no lightweight at 15kg/33lbs per person (total 30kg / 66lbs). However, that’s no more weight than a pair of comparably specced solo tourers, and you’ll never experience such low wind resistance drafting another rider as you will sitting on the same bike as them!

What’s nice about the bike is that you don’t really feel the weight when you’re underway – it feels sturdy and inspires confidence, but isn’t sluggish. If you live on a top floor flat, the weight might be an issue but otherwise the good balance of the finished bike means it isn’t too hard for a single person to lift (although it’s much easier for two).

One of the killer features of the Quetzal is the ability to fold – or even split the bike in half. This will make it much more practical for those who want to transport it by train or even car – just put it in the back! 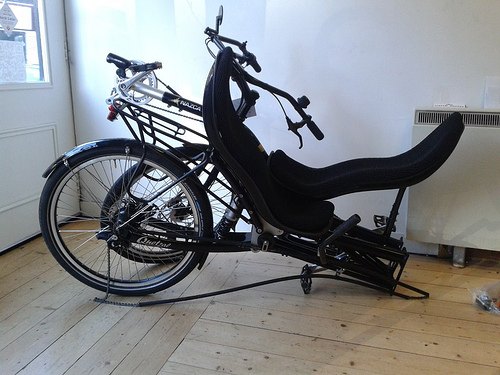 The frame is joined at a strong plate by four bolts (which you need to undo whether you want to fold or split). The Quetzal folds without anything being removed – just unship the rear chain from the stoker’s cranks – into a very compact package: 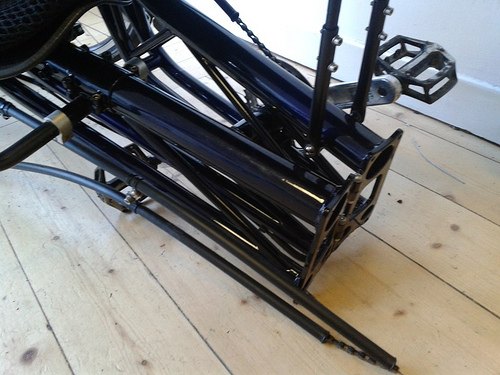 The seats nest together so that the fold is much tighter than you might expect (note one of the stoker’s bars has been removed): 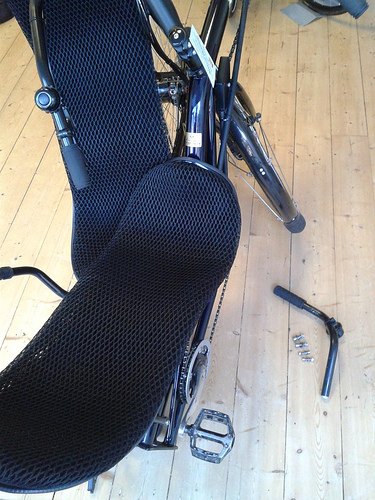 A further two hinge bolts can be quickly removed to separate the frame altogether, although in this case the Rohloff and rear brake cables would need to be disconnected. 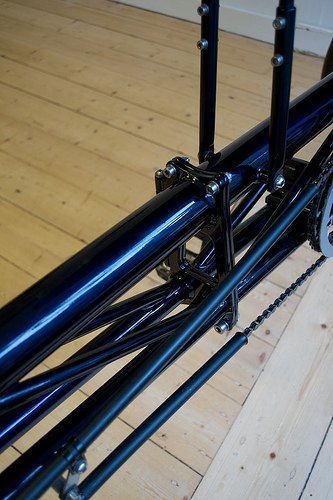 Each seat is adjustable for recline – the front by a set of struts, the rear by a quick release ‘ladder’ (like solo Nazca bikes). There are also two front mounting points for each seat, to allow them to be positioned fore or aft in case of a particularly short or tall rider in either seat. 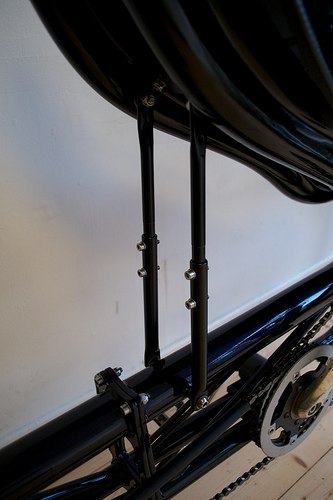 The seats are relatively upright – 30-38 front, 36-40 rear – if drilled as stock. This is a happy medium for making progress while enjoying the scenery!

While the captain adjusts for leg length using a conventional boom, the stoker gets to take advantage of a very clever sliding bottom-bracket assembly that can be moved out and back along the main frame.

This allows a great deal of height adjust while keeping the geometry, rack and luggage arrangements at the rear rigid and consistent.

The hardshell seats are available in M, L, XL (not small. I’m not sure if this is just because these are really S / M / L but there’s some industry tradition attached to seat sizing?)

Hardshell seats with ventisit pads almost define a European bike, and this is no exception – comfortable, dry, with great transfer of power and sensation between rider and bike. 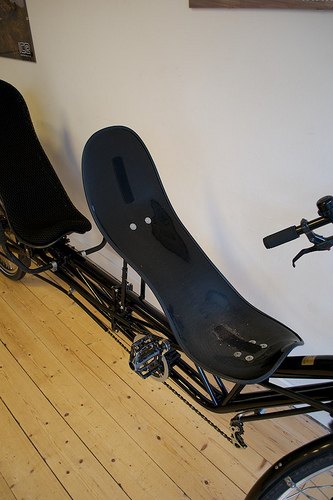 I suppose one disadvantage is that if you want to share the Quetzal between several stokers (or captains!) you’ll need to go for a (hopefully) happy compromise, or use velcro and foam pads to modify the seat curve to please one rider.

However, sized correctly you’ll be able to go as far as your legs can take you: I rode the same Nazca hardshell seat / ventisit combination (on a Gaucho) on the 1200km Paris-Brest-Paris…

The Nazca Quetzal runs 26″ wheels, giving a great compromise between performance, comfort and durability. Max tyre size is a cool 2″, which opens up the really excellent Schwalbe range of wide tyres, from the Marathon Extreme, Dureme and Mondial expedition tyres at one end to the Big Apple or Marathon Supreme (or the 2.0 Kojak) at the other.

With a full 2″ tyre fitted, there’s still plenty of room for a pair of SKS full mudguards.

Of course, there’s nothing stopping you fitting a 1″ tyre if you’re brave enough… I’m just not sure it would do the traction or comfort any favours, to say nothing for pinch flats!

The Rohloff Speedhub needs no introduction. Although Shimano’s Alfine is starting to nibble away at the more cost-concious end of the market, the German specialist still dominates at the high end – and with good reason. 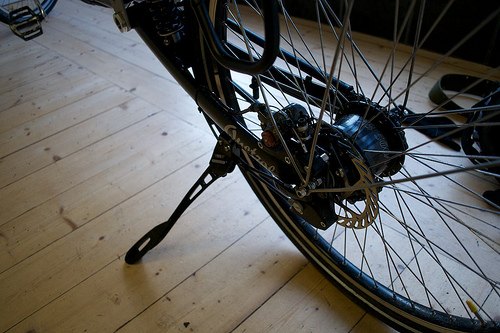 You’ll be shifting under a lot more power on the Quetzal by the simple nature of the tandem format, and the difference in feel between the two hubs is dramatic (I was fortunate enough to be able to demo an Alfine-equipped tandem side-by-side with the Quetzal).

The ultra-long chain is well controlled by tubes and idlers and however unlikely it looks, the cranks rotate backwards by hand quite freely – there’s no sense that you are bleeding a huge amount of power and the chain will enjoy long life thanks to this protection from the elements.

As both the front and rear chains have independent tensioners, its possible to adjust both front and rear leg length without having to add or remove chain: 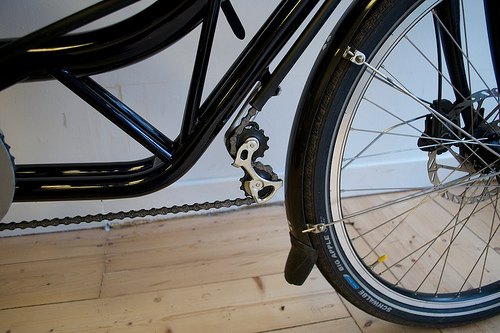 As I mentioned in the introduction, you can either ride the Quetzal with sychronised cranks or fit the optional freewheel rear chainset, which allows only the pilot to pedal. There’s an element of personal preference, I found the ability to ‘disengage’ the stoker for tight manouvres very useful, while as a stoker, the ability to stop pedalling altogether to focus on maps, photos or food could be excellent.

The Quetzal rack is rated to a mighty 30kg (66lbs), which happens to be about the weight of the tandem itself. That means Nazca warranty the Quetzal to carry an entire spare Quetzal on the back!

A rack top bag or conventional panniers would be a more common load, and as mentioned, there’s plenty of room around the rear seat to add large panniers on the lowrider rack, seat-slung Radical Banana Bags (up to 70L!) or bulky items such as camping gear. 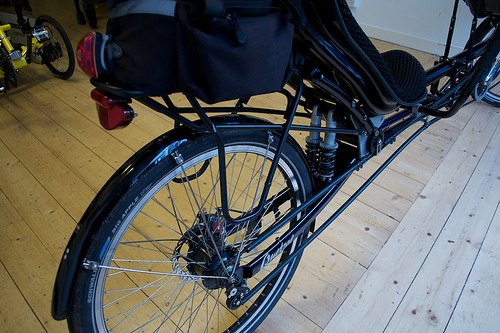 There’s less room up front for luggage. Although it might be possible to fit lowrider racks to the fork without obstructing the pilot’s dismount too badly, by the time you get to this extreme a trailer is probably the smart option. You can certainly tuck away a few things in frame or mini seat bags, or possibly a (small) pair of seat-slung side panniers.

Because of the Quetzal’s long wheelbase, the effects of luggage on weight distribution/handling will be much less pronounced than on a solo bike – although I haven’t yet had the opportunity to ride it with luggage, as a proportion of total weight the maximum change in distribution is still not such a big factor.

The Quetzal is fitted with discs front and rear – the only sane option. 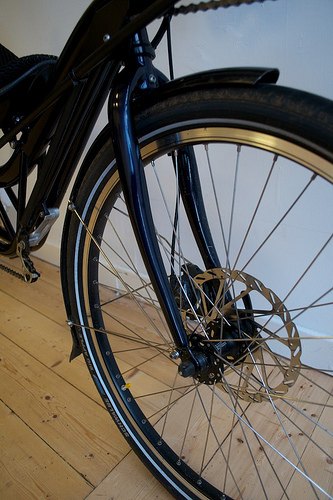 This version has a hydraulic front caliper onto a large rotor and Avid cable disc rear. Very effective stopping power, and nicely modulated.

The Quetzal will cost a cool EUR4795 total (EUR2400 per person). This is enough to buy a pair of very well equipped solo bikes, but it’s not outrageous in the world of built-to-order tandems – add a Rohloff to a Santana and you can quickly find yourself with a conventional tandem for similar money.

People don’t invest in tandems to save money, of course, but if it’s any reassurance the Quetzal seems certain to last a lifetime (and retain a high value at resale, should it come to that!)

Nazca have produced a remarkable bike in the Quetzal, combining fantastic features and build quality with a ride that is critically acclaimed (if only by me, so far!).

With enough speed to satisfy on the open road, manouvreability to cope with the inner city (although you might need to practice!) and the stability to let you ride confidently, whether fully loaded or out on a day trip, it’s hard to see how the Quetzal will not come to be considered a design classic.

All you need is a co-pilot. What are you waiting for? 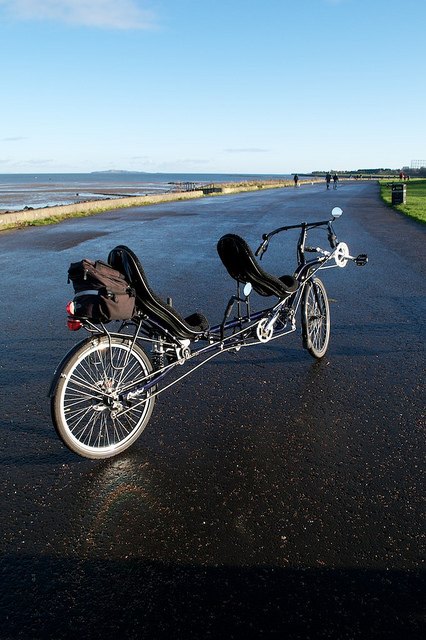 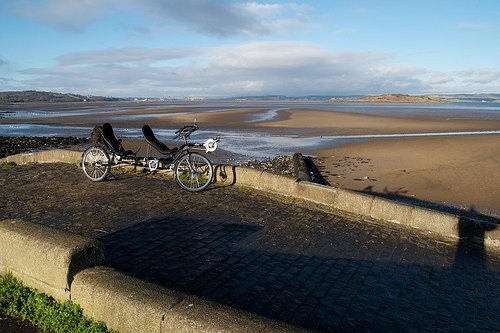 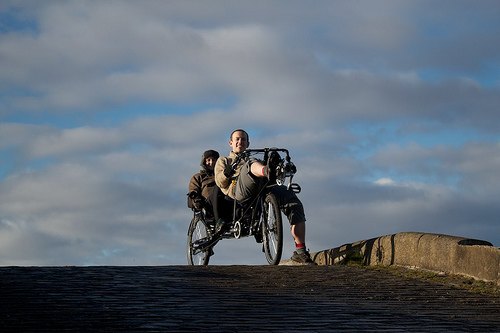