Wised-up commuters are getting around quite happily – almost as if there’s no snow at all, in fact…

or, “why Schwalbe’s Marathon Winter is for you”

As Britons writhe in the grip of this first blast of icy weather, a small band of wised-up commuters are getting around quite happily – almost as if nothing’s going on at all, in fact. 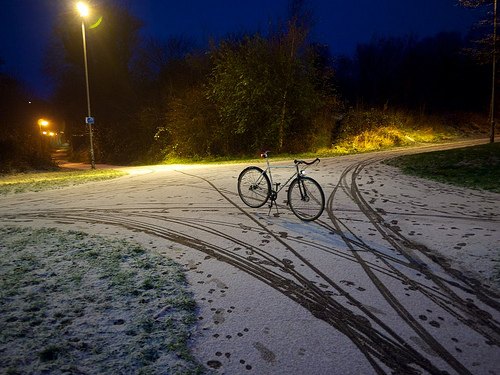 The secret? Studded tyres – ordinary bike rubber with carbide tipped spikes that provide grip in all conditions – from dry tarmac to frozen lakes. Next time you’re gingerly walking across a frozen patch and another rider flies past, you know what the ‘rice crispies’ sound their bike is making is all about 🙂

Speaking for myself, I’m pretty sure I can finish my 15-20 minute Edinburgh commute before some of the neighbours manage to defrost their cars, completely unhindered by the frozen mess of Edinburgh’s roads and paths.

Local bike shop The Bike Chain (Canonmills, just off NEPN) have a couple of the more likely candidates on offer, although I hear stock is flying off the shelves like hot cakes: see the next section for online links.

Before you can narrow your choice of tyre, you need to decide which bike you’ll be refitting. The narrowest option is the 30x700c Schwalbe Winter, which is still wider than you’ll fit on any racing bike; unless you have a cross bike, utility model or tourer it might be that you decide to leave your usual bike as-is and winterise your mountain bike instead (there are any number of 26″ options).

However, if you can fit studs to your usual bike, you’ll avoid the agonising decision each day trying to work out which bike to ride (and then getting caught out) – like leaving your lights at home, it’s a bit of a gamble. 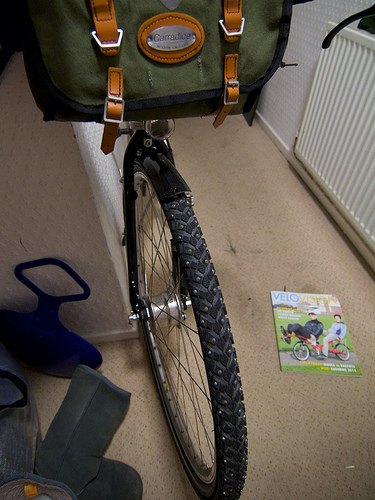 There’s no real disadvantage to riding your studs every day, except that they will wear a little faster (unless you ride hundreds of miles a week, in which case it would be cheaper to keep them on spare wheels and swap!)

Sure, they make a lovely rice-crispies noise and of course, they are a little slower than your summer race tyres… but who are you kidding? You’ll still be able to race the other commuters and beating them will be all the more satisfying! 🙂

How much tread do you need?

With similar stud counts, tyres will all be roughly as grippy on frozen surfaces (only the studs can cling into ice, the tread’s irrelevant) but if you need to ride through soft snow, the studs won’t make much contribution – then it’s all about the deep, widely-spaced rubber tread.

Generally speaking, the common hazards facing the domestic rider are frozen surfaces and (rarely) light snowfall – we don’t tend to get huge dumps of snow on a regular basis. For my money this makes the ‘road’ treaded tyres like the Marathon Winter (or Nokian A10, or W106) a great choice – they’re not too agonisingly slow on clear roads, have enough tread for an inch or few of snow in typical UK conditions, and plenty of studs for the daily hard frost or icy puddle that may cross your path.

On the other hand, if the going gets really tough (or you want to ride off-road) those tyres will really struggle in any depth of snow. Look instead at the knobbly MTB-style options like Schwalbe’s Ice Spiker (or Nokian W206, Extreme, or Continenal’s Ice Claw). Generally these are 26″ tyres, although one or two are available for 700c/29er bikes too.

I’ve written extensively about the Marathon Winter already; it’s my own go-to choice.

The low tread offers minimal extra resistance on dry tarmac – you’ll notice, but it’s a price I don’t mind paying for peace of mind and AWESOME STUDDED POWERS. At the same time, there’s enough tread to pull my Carry Freedom bike trailer uphill in an inch of fresh snow, and the studs allow me to ride with confidence on sheet ice (video to follow!) 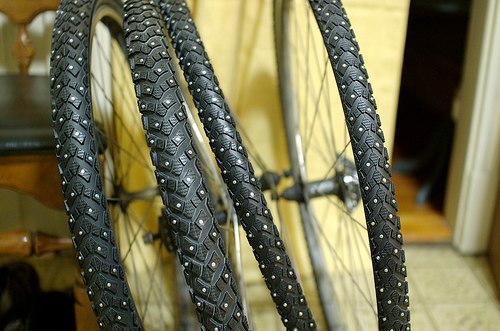 Look to pay around £40 for a single Marathon Winter, but with 240 carbide studs and excellent dry road manners it’s something I haven’t lost sleep over.

The Nokian tyres are less commonly stocked in the UK but bike-discount.de is a promising start. The German mail-order outfit have Nokian W106’s at a similar price – personally I think the reduced spike count (106 vs 240) and heavier tread make them less promising, but YMMV…

I don’t have any personal experience here yet – although we’re contemplating an order for ‘serious’ off-road tyres to get some winter singletrack action at Glentress. However, from a cost-benefit standpoint the Ice Spiker (not Pro) looks like a good compromise – plenty of studs and a great tread pattern but competitively priced. 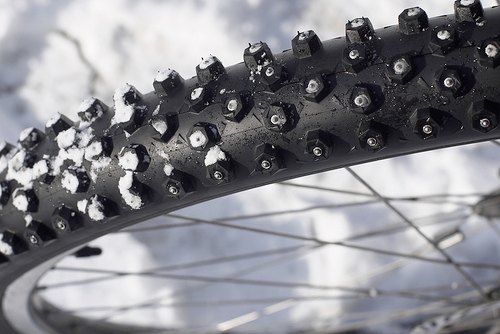 You could pay more for the lighter Pro version, but who are we kidding? Are you racing off-road on snow now?

The Nokian Hakka W240 are also pretty interesting, slightly more expensive with a slightly less aggressive tread. If we kit out both hardtails I think we may go for one set of each to compare, and I’ll update this.

I want a real budget option

Interestingly, Schwalbe also produce a range of ‘Winter’ (not ‘Marathon Winter’) tyres which have a reduced stud count and correspondingly reduced price – at the time of writing you can get a 30x700c 118 stud Schwalbe Winter for under £20 (plus shipping) from bike-discount.de which also happens to be the narrowest studded tyre by some margin – the rest start at 35-40mm upwards.

As the central studs provide 90% of the grip (the lateral ones mainly help the tyre climb out of icy ruts, not during ordinary turns) this could be all the tyre you need at a bargain price! 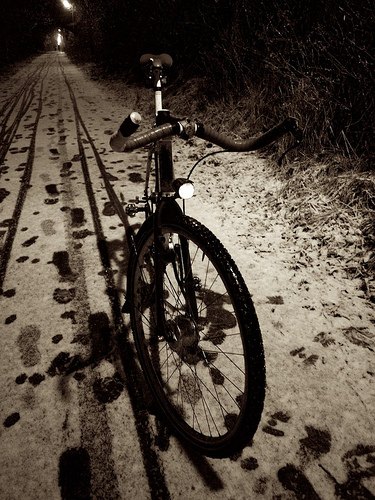 Whatever you choose, the important thing is to get out there and enjoy the winter weather! It’s nothing to be afraid of 🙂