An excellent budget dynamo light that still packs quite a punch – ideal for around town!

All the light you need for year-round urban riding!

The dazzling Lumotec IQ Cyo may be an expensive and over-the-top choice if 40mph descents in the middle of the countryside at 3am aren’t top of your agenda.

Not to worry though – the German masters of lighting at Busch & Müller have a secret weapon that’s right up your nearest dark alley: 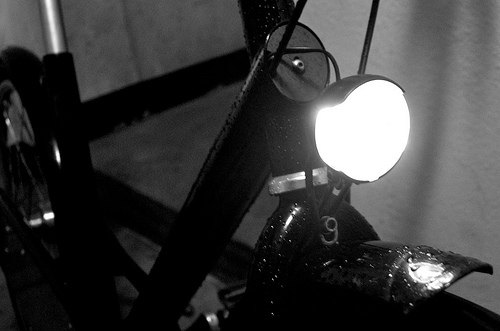 The Lumotec Lyt is a budget-priced dynamo headlight which offers absolutely killer performance for urban environments. The output is markedly less than a full-on headlight like the Cyo but you are paying a fraction of the price. Aimed high, the Lumotec Lyt will still sear the retina of distracted motorists and is adequate to ride (with care) on unlit paths or roads.

As with all shaped-beam headlights, the key advantage of the Lumotec Lyt is that it puts photons exactly where you want them and not where you don’t (it doesn’t, for instance, spray them up at the poor chaps in the International Space Station, like any old Cateye).

Unlike more dedicated road headlights the Lyt is heavily designed towards lateral / off-angle visibility, with very bright projection to either side that will leave your fellow road users with nowhere to hide.

It also includes an integral front reflector which becomes backlit when in motion, so the total area of the light is very much larger than an average commuting LED. In fact, the surface area of the Lyt is an impressive six times (6x) larger than a 1″ diameter high power LED headlight, making it much easier for other road users to calculate your position. Such is the level of consideration put into continental headlights!

If you choose to use/abuse the shaped beam of the Lyt by lofting it directly into drivers’ eyes, I’d put it up against any reasonably priced battery light on the market for raw power (in the sweet spot, it matches our three sets of £100+ Ay-Up MTB lights). It just doesn’t have as large, useful or far-reaching a ‘sweet spot’ as headlights like the Cyo. 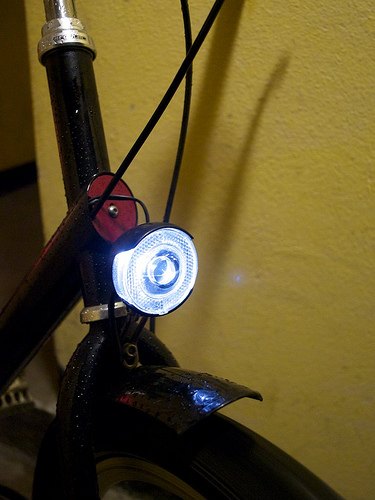 Obviously, to power a dynamo light you are going to need a dynamo – either built into a hub or a roller which acts on the sidewall of your tyre. This increases the initial investment but please believe me, I wish I’d spent five times as much on a dynamo hub when I first started riding at night than go through the pain of endless battery lights that everyone else is putting up with.

We have three dynamo hubs now – you’ll never look back.

As with all dynamo lights (and as I observed for the Cyo), the Lumotec Lyt stays on your bike unless you want to spend five minutes with a toolkit every time you lock it up. I’ve had no issues with this, hopefully because local thieves can’t be bothered to spend five minutes with a toolkit either (for a light that won’t work without a separate power supply!) but YMMV.

As with all dynamo lights, you can buy the Lumotec Lyt equipped with a capacitor ‘stand light’ mode, which keeps it bright while you’re stationary in traffic. I recommend avoiding the slightly cheaper non-standlight models (in B&M branding, you need to get a Lyt “Plus” for the standlight feature), unless you like to stand in the dark in the middle of the road when waiting to turn right!

As with other lights like the Cyo, Busch & Muller produce a lot of alternative versions:

So, a Lyt B N Plus is a basic (15 lux) manually switched light with standlight feature.

Some combinations may or may not exist, and price generally increases the more letters you add. My personal recommendation is for the straightforward Lyt Plus (25 lux unswitched/always on, with standlight). 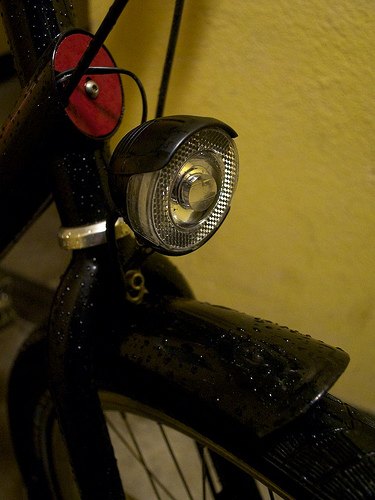 If you want your bike to be equipped to ride at any time of day or night, with a powerful but great value light that isn’t easy to steal and never runs down, you owe it to yourself to get in on something like this. Really.