That’s me, doing a little under 33mph on a flat bit of road in the crazy Milan velomobile…

It’s cycling, Jim, but not as we know it

Last weekend I spent an afternoon with velonaut Richard Bloodworth and Laid Back Bike’s David Gardiner trying out the Milan velomobile.

Regular readers will be aware that I’ve been documenting the construction of this Milan for the last few months so was very keen to get behind the “wheel” of this remarkable vehicle:

That’s me, doing a little under 33mph on a flat bit of road towards the end of my second 10km “time trial” up this section of dual carriageway… thanks to David for capturing this footage!

It’s only fair to be up-front and say that I can’t really ‘review’ the Milan in the same way as the many recumbents I’ve compared on this site to date.

For starters the Milan is the only velomobile I’ve so much as sat in, never mind ridden. At least the sitting part might change when Edinburgh gets its first carbon Quest later this year but even so, I think a huge period of adaptation would really be needed to do these remarkable vehicles justice.

The Milan is so fundamentally different to any other type of bike (or vehicle) that I think there would be little value in trying to rate it “versus” other bikes, (in terms of possible uses, luggage, practicality etc.) – you really need to come to your own decision that a velomobile would be right for you…

This piece should really just be taken at face value as a short insight… you have been warned! 🙂 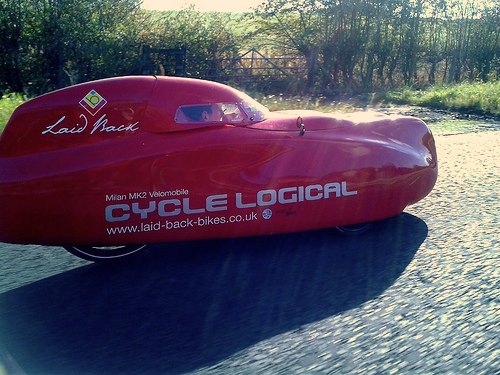 Adjusting the Milan wasn’t too difficult because I’m shorter than Richard: we removed a section of chain and then pulled the bottom bracket in by 6″ or so (which has to be done with the vehicle on its side, via the reversing foothole).

It’s not amazingly convenient but having this access clearly makes a big difference to the maintainability of the bike in field conditions. I’d think carefully before buying something which restricts access through the cockpit itself (especially as the Milan’s built-in headlights lights can’t be used to perform maintenance when the ambient light is low).

Richard is pretty tall and still fits inside the Milan OK, after having tweaked his position. For what it’s worth at 5’10”, ~43″ x-seam, relatively broad shouldered and with modestly size feet (!), I thought I’d fit a Milan “SL” easily enough – there was bags of room in this full-size version even around my shoulders.

The steering lock, though limited, still allows the Milan to turn more or less in the space you’d use in an average family car – so if you can drive your route, it will be OK by velomobile.

One note was that my smooth road shoes were terrible at attempting to reverse using the foot hole – which made the one three-point turn I tried, to back towards the driveway, a total failure. Something with a bit of grip left absolutely necessary (although of course you can always jump out, this isn’t a quick operation because of the hood!). 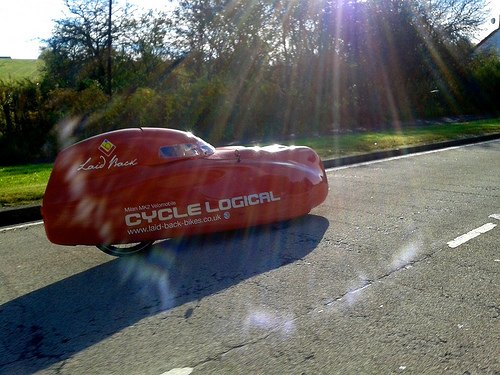 If you expect the steering of the Milan to be vaguely related to anything you’ve ridden before, you’re in for a surprise! It’s barely even a distant cousin of the various ICE trikes I’ve ridden…

Below 15-20mph the Milan is relatively placid, but as you build up speed the handling becomes razor sharp, possibly in a good way (long term owner’s report required!) but for a test ride, it was really quite intimidating.

The most hairy moment came as I descended a shallow slope on the empty dual carriageway at around 40mph, when I spotted a car building up speed to join at a slip road. The natural thing to do would have been to move into the fast lane and pass them, but I felt neither able to steer or brake, so close was the Milan to the edge of its handling. This is also an issue if you have any tendency to grip the bars as you put in power – you soon won’t! 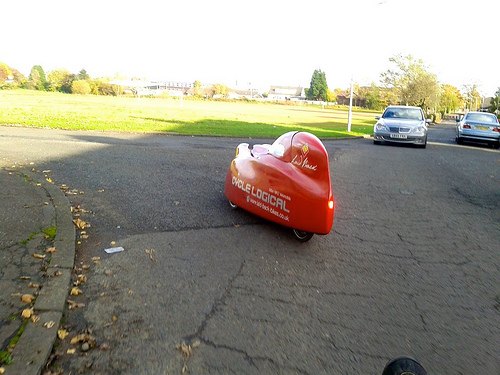 By the end I had learned to partially tame this trait by pressing my arms against the inside of the fairing, and guiding the steering with a feather-light touch from two fingers. I’m hoping to hear from Richard that this, like other aspects of my test ride, is something you’d naturally grow comfortable with / out of.

There’s lots of brake steer, which in my opinion is mostly something you’ll learn to anticipate but does complicate a test ride – you can see the brake steer visibly in the second “slip road” video just after I leave the main carriageway, bringing the Milan a little to the left.

Potholes and other road imperfections need a careful lookout, not just because the Milan has very low ground clearance (or even because the ride quality deteriorates dramatically on a broken surface) but because, even with suspension, quite a lot of shock makes it through to the body, and of course everything is drilled into carbon fibre, from the seat mounts to the suspension struts.

It’s encouraging that so many Europeans are doing very high mileages without their velomobiles cracking apart, because to the untrained ear it sounds like it’s taking quite a pummelling! 🙂 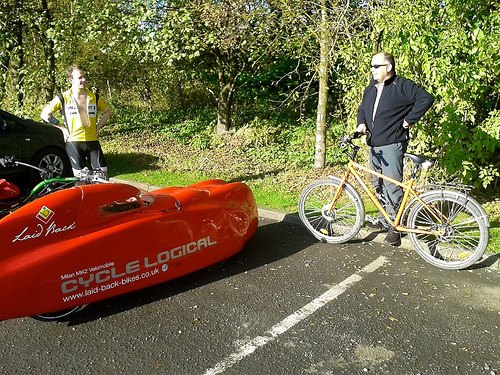 You’re going to find the Milan either remarkably heavy or remarkably light depending on how you look at it. You could pick up a featherlight road bike in one hand and then try to do the same with the Milan on the other (you’d fail!), but on the other hand, I commute on a ~13kg upright often pulling a 10kg trailer, and then you’re only looking at a few extra kilos to make what I consider still a fast moving combination into a full blown velomobile.

Compared with other velomobiles the Milan is supposed to be significantly lighter, but I can’t really comment on that based on my not-so-extensive first hand experience!

It’s getting hot in here

The heat inside the Milan is something else. Even though the day was cool (I rode in a windproof, long sleeves and fleece gloves to and from the rendezvous), I rode the Milan in a summerweight short jersey – unzipped!

At lower power output the air circulation under the visor was fine, but when I was going for it the fairing got very hot very quickly… after 20 minutes going hard it was like a sauna. Fantastic in winter, but I’m interested to know how Richard will get on next summer (luckily Scotland’s shortest season!) – lots of hydration needed I imagine!

The noise inside the Milan is fearsome. Probably this could be further optimised with some more damping material between the hood and the cockpit rim, but as it is I would certainly want earplugs (or of course headphones) if I rode it regularly. It’s not so much drivetrain noise, the drivetrain being a sort of low rumble/hiss, but road surface ‘detail’ that is bouncing around the close confines like thunder.

How tight you manage to get the bungee / velcro holding down the hood obviously contributed a lot to this, as my last ride was much better than the first – so perhaps I was also missing a few tricks here.

Given that they can’t hear traffic while in motion you’d be right in assuming a Milan pilot won’t be making any manouvres across the road without looking behind them… and the hood makes this more than an academic question, as it restricts visibility to the forward 180 degree arc only (however, I didn’t feel visibility in the forward/side directions was compromised by the hood significantly).

Indicators are built in since there’s no way at all to get your arm out in the open air!

Traffic reacted to the velomobile in a very positive way – in fact they were almost troublesomely patient, including at a roundabout where traffic from the right insisted on giving way to me (the opposite of the way UK roads work)…

The Milan is similar in stature to a sports car like a Lotus, although of course considerably narrower. Certainly I had no fears whatsoever that I would be crashed into, and this was borne out by the reality of riding it both in village streets and on open dual carriageway.

Of course, it’s quite possible that a peer of the realm may be writing text messages while driving and crash into the first velomobile (or ordinary bike, or lamp post or parked car) they find, but if they did the carbon bodywork would hardly be a disadvantage compared with an exposed human body. (Although as reported recently, it may not help if you are hit side-on at a crossroads). 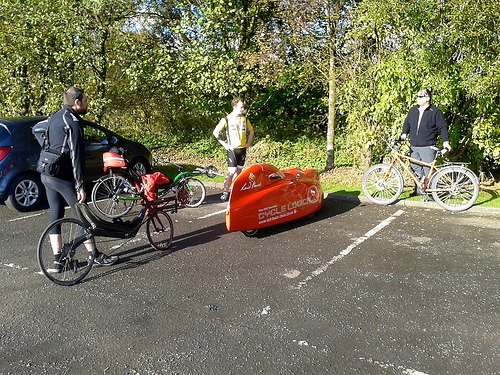 There’s a huge amount of friction in the drivetrain which I think probably contributes as much to the Milan’s sluggish performance at low speeds as the weight – the chain run is very long and almost entirely within tubes, and you can feel when turning the chainset by hand just how much drag that imposes.

But mechanical resistance is only a small part of the story – to be fair, one doesn’t buy a velomobile to accompany joggers in the park… what happens when you unleash it on the open road?

The first thing to comment on is the velo’s momentum. You’d think that the weight of the Milan would bring it rapidly down to earth when the road turns up, but in common with Richard’s own reports, I really did feel that it just kept rolling forever – only the more sustained climbs really forced me to sit in and winch up.

Once speed gets much above 15-20mph the aerodynamic advantage of the Milan comes into its own, in fact after the initial acceleration effort is complete, it hardly feels more strenuous to ride at 25mph than 10mph.

The main run I put in was 10km / 6 miles out and back on a stretch of dual carriageway (roundabouts at either end, but unfortunately some traffic lights too). By this point in the day I had already ridden the Milan a score of miles on local roads as well as travelling to and from the train on my Strava bike, so on top of being at a seasonal low fitness-wise, I wasn’t fresh either.

Still, I was able to hold a hair under 30mph for almost a mile and a half and finished the 10km at an average of just under 25mph, again a major achievement considering the two traffic lights and two roundabouts that held me up on the circuit.

There was an average gradient of just under 1% (of course, concentrated in a couple of sustained rises) which saw me freewheeling over 40mph and reduced to under 20mph on the return. All in all, I could easily picture adding 5mph onto the rolling average with time to condition myself. 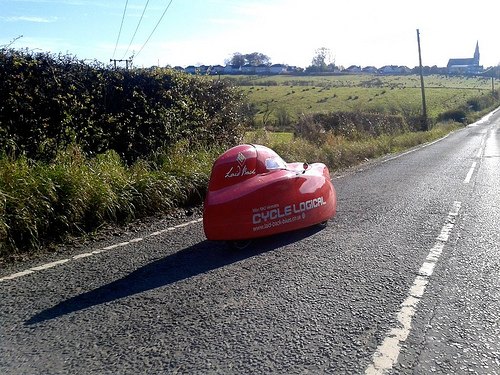 So there you have it – a bit of a ramble for which I apologise, but hopefully some interesting or useful observations about this singular machine!