Remarkable tyre keeps you rolling through the bad times 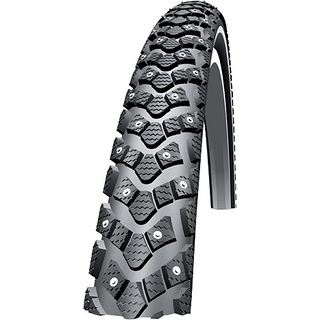 Requiring considerable care to use on dry tarmac (heavy braking, trackstanding and any dragging of the bike sideways are likely to pull out studs), this is a tyre that needs nursing until the moment the bad weather hits – then you appreciate its true brilliance.

You know something’s working when you can pull a trailer up a slope coated in ice, or plough through snow like you’re on a mountain bike – and despite the studs and weight, roll respectably well on the good days.

Unfortunately, even carbide studs will wear in mixed conditions, meaning this tyre may have a shorter lifetime than you might hope (potentially just one winter), although visual wear on the studs doesn’t necessarily seem to impact their performance.

If you’re worrying about this too much, you’re probably not in the market for winter tyres in the first place!

The Schwalbe Marathon Winter features thick sidewalls and a burly tread before you even consider the ~240 carbide studs clattering off the tarmac like overgrown rice crispies. For what it’s worth, the TPI count is a respectable 200 (three layers of 67tpi ply – for some reason Schwalbe don’t add up the layers as other manufacturers do). 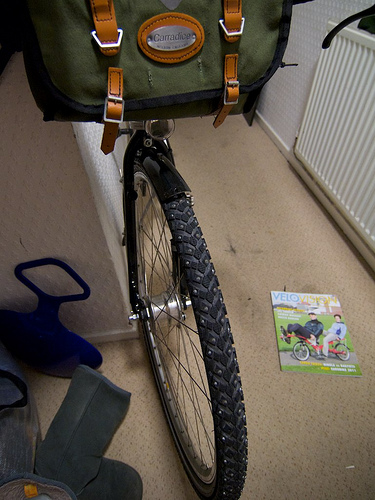 It’s unquestionably slower than a slick road tyre (obviously!) and also slower than non-winterised Marathons. However, it is still faster than knobbly mountain bike tyres when you’ve blown them up fully, and the tyre is rolling on the central strip.

Overall I was sufficiently satisfied with the performance of the 700C Marathon Winters that I kept mine on all winter (around three months) last year even though snowfall and ice was limited compared with the two previous, horrendous, winters.

On snow and ice performance is excellent – so long as you’re sensible of anticipating corners and braking needs, you can get up a fair speed without worrying for your safety.

When I swapped back to Kojaks it did feel like my bike had sprouted wings! 🙂

My preferred combination of 42mm front and 35mm rear tyre meant that I was laughing at Edinburgh’s road craters, kerbstones and so-called cobbles (aka regular pattern of gaping holes in the road) all winter long.

That said, it would be a lie to suggest that the Marathon Winter is a comfortable tyre just because it’s fat… the rubber is thick and relatively dead-feeling, so I wouldn’t rush out to buy one for the great ride quality. It’s more that they are surprisingly useable-considering-what-they-are than comfortable in an absolute sense.

First, the question everybody asks – I had no trouble at all with the studs causing a lack of grip on dry or wet tarmac. When the studs hit a surface they can’t penetrate, they just sink into the tread, leaving almost as much rubber as normal in contact with the ground. There’s no danger of the bike skating off the road on a slippery metal stud! 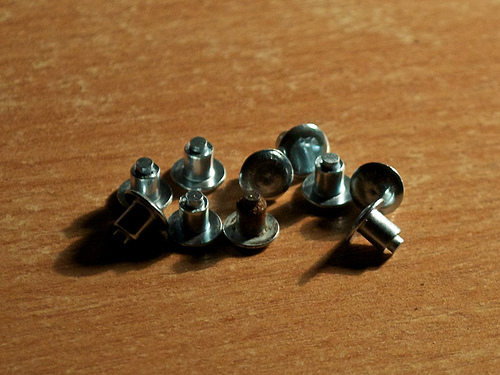 Studs. Note at the centre a stud which came out after a few commutes – not yet rounded off.

I did find an unexpected benefit that the bike was much better controlled on piles of decaying leaves on the railway paths – presumably because the studs pierce debris easily, and the stud/road traction is higher than rubber/wet leaves.

When winter comes though – oh boy. It’s really uncanny how well these tyres drive through snow and ride on even thin frostings on a cold morning. You’d be foolish to expect them to give as much grip as dry summer, but you can easily stop the bike thinking that you’re just on a bit of ground frost, and find your shoes scrabbling for grip…

It’s really unlikely that you’ll flat on a tyre as burly as the Marathon Winter, just because there’s so much material between your inner tube and the road. They also feature a Kevlar puncture strip for added reassurance.

I didn’t have any issues at all with mine for the one winter I’ve ridden through central Edinburgh’s glassy routes – they don’t even seem to cut as easily as the rubber on my other tyres.

If you have a dedicated winter bike or at least a spare pair of winter wheels, you should avoid riding on the Marathon Winter unless it’s actually wintery, because the studs don’t last when used on tarmac.

Spare wheels aren’t really practical for me as I have a hub dynamo and a hub gear, and the bike is already my hack bike (I don’t commute on my nice bikes at all!). It’s not really an option to fit these tyres and remove them repeatedly on the hopes of an accurate weather forecast, so I fitted and ran them all winter in the knowledge that the wear would be high.

Despite that, I haven’t ridden such a large distance in one winter that I’d like to guarantee the durability of the Schwalbe Marathon Winter overall – at only 50 miles a week, ~12 weeks is just 600 miles. Rubberwise my tyres are still looking pretty new, but that’s not surprising really when you consider how many miles you’d expect even from cheap rubber…

Unfortunately, although people say that the carbide studs are hard and don’t wear in contact with the road, there’s a lot of rounding off on the centre pairs of studs on both my front and rear tyres (especially rear). Where my fingers clearly feel a sharp edge to the new studs, the centre pairs on both feel like they’ve been carefully filed around to create more of a round sort of dome 🙁 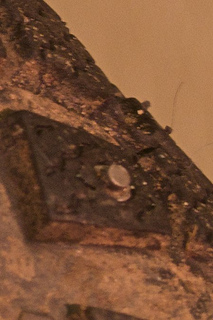 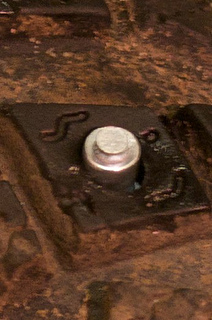 L: worn stud, starting to lose edge definition. R: new stud, just fitted
(you can see the wear also in the larger photo below):
Note difference made by ‘bedding in’ the studs!

Now that it is the second winter, I want to update this to say that even with visually rounded studs, I’m still getting superb traction on sheet ice – enough to ride confidently through gentle turns, as you can see on the video in my recent studded tyre summary article.

So, the jury’s out. It seems clear that I’ll get another 5-600 miles OK, but beyond that, who knows. One CCE member already has over 1,000km on a pair of Schwalbe studded tyres and reports they still grip like new.

You do lose studs (I lost around 10 per month over three months, or one every ~20 miles). Mostly I lost these at the start, before I figured out a couple of key rules:

Replacing studs is relatively straightforward with a screwdriver (or you could invest in a proper tool) – studs can be bought online for about £0.15p apiece).

Schwalbe are bringing out a pack of 50 replacement studs along with tool, RRP unknown. It’s not here (in the UK) yet – the weather’s still too nice 😉

The tyres are expensive enough that I’d certainly look at getting a few replacement studs and fitting them as part of your routine bike maintenance. Replacing both centre lines of studs after a hard winter’s use would cost around £18 per tyre for parts, versus the RRP of £45 (street price £40?), but you’d need to budget an evening’s frustrating labour and probably want to invest in the tool linked above.

I’m not sure it would be economical by any reasonable costing of your own labour! 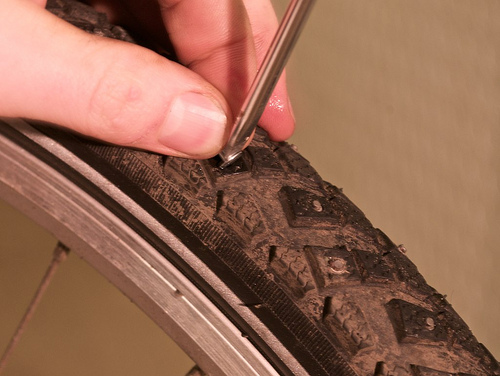 The possible but not-ideal way of replacing studs, with a screwdriver!

Don’t go running to the bike shop when you discover a bunch of studs are missing, either – it’s almost certainly user error.

As with rolling resistance – if you’re worrying about this, you might have the wrong idea!

That said, the Schwalbe Marathon Winter is the same weight as an equivalently-sized Marathon Plus (or about 100g heavier than an ordinary Marathon), so it’s only when you compare them with something like the Schwalbe Kojak (which is 500g lighter per wheel!) that you’ll really notice the difference…

Not something you’d keep on for fun, but not insane either.

Do you want to be able to ride with confidence in subzero conditions? If so, a pair of Marathon Winter tyres should really be in your future.

They certainly aren’t without downsides:

… but then again, what do you want from a special-purpose tyre? You can ride on snow and ice without falling over. That comes with accepting the costs (so most people don’t use studded tyres). 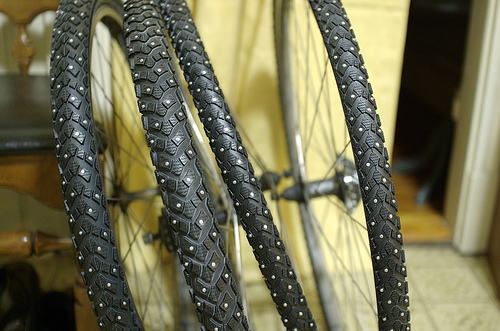 For me, with the severe winters in two of the last three years it was a no-brainer to fit these to my “maintenance free” town bike – even if I only get one more winter from them, that’s still a cost of £40 per annum, way less than getting the bus on wintery days.

2009-2010 and 2010-2011 saw me relegated to my mountain bike (and then have to completely replace the expensive drivetrain, not to mention getting soaked by the lack of proper mudguards).

I’d much rather go down this path, even at £40 each, as I want to be able to ride with confidence 365 days a year.