Rather than spend £66 taking the car on the ferry, we chose to take the Y-Frame instead, mounting two large plastic boxes with rucksacks strapped on top…

Full ROI after just 9 months – bring on the good times

We just took a long weekend and went to the isle of Arran.

Rather than spend £66 taking the car on the ferry, we chose to take the Y-Frame instead, mounting two large plastic boxes with rucksacks strapped on top: 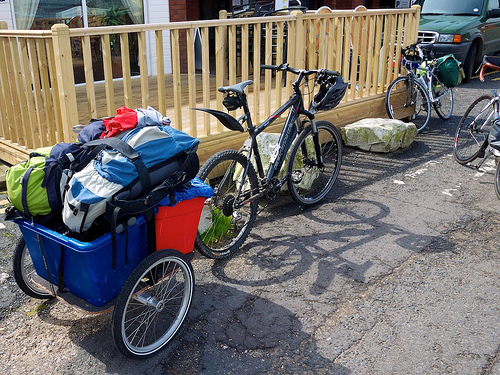 This is catering for 5-6 people plus three days gear for biking and mountaineering for two. All handled easily (on the way across, the liners went outside the bags to keep everything dry).

As an unexpected consequence, my Carry Freedom Y-Frame large has now saved me more money (in petrol/mileage and other expenses) than it cost to buy and run since I bought it in 2011: 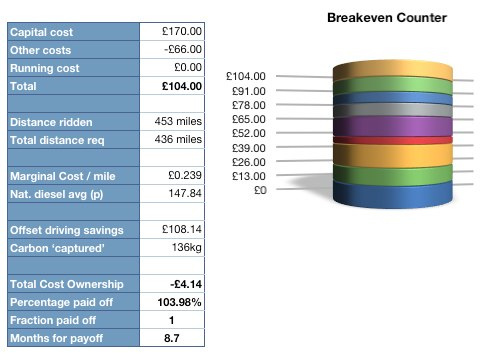 We don’t often need to take a ferry, but even so we were on-track to break even after around 13 months. (That’s a P/E ratio of 1.08x, compared with 15-20x for the FTSE). If only the effect scaled up with multiple trailers, I could invest in them instead! 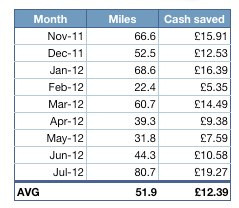 The eagle-eyed will notice that I claim zero running costs for the last nine months. However, to be fair, the trailer is not in mint condition any more, and I haven’t priced in my own labour keeping it on the road.

Here’s a screenshot of the maintainence table from the spreadsheet:

Significantly, both wheels are running quite out of true, not because of overloading or impact damage while towing, but because I forgot I had the empty trailer a couple of times and launched it over the full height kerb arriving at the office, resulting in a shoulder-height bounce and sideways landing – my own fault really.

Luckily the trueness of trailer wheels isn’t really that important, but once they start to break spokes, I’ll need to budget £10 each side for new spokes and relace them (which will take more like an hour’s labour each side too).

There are a couple of things firmly on the to-do list:

I’d also really like to try getting more from the trailer by fitting some kind of flail to keep down vegetation on the North Edinburgh Path Network, but that’s a big jump (from fiddling with existing stuff to fabricating new things).

I can’t see any reason why the trailer won’t last almost indefinitely, so with a monthly saving of just over £12 on average, there’s plenty of room for small-scale experiments…

3 thoughts on “Making money with the Y-Frame trailer”