The HGV driver, knowing he represents < 5% of traffic but is involved in 2/3 of killings, will be especially careful to check those mirrors before swinging left. Right?

Dangerous lorry drivers “getting away with murder?”

As part of National Bike Week, Spokes and various other stakeholders got together to cordon off Festival Square on Lothian Road for a sort of large-vehicle-danger seminar.

Present was a council tipper, not a bin lorry – perhaps wisely avoiding uncomfortable questions over the death of Craig Newton, who was tragically killed last year when the driver of an Edinburgh Council bin lorry drove over him in broad daylight.

Nevertheless I found the experience of sitting in the driving seat to be extremely enlightening, if not perhaps for quite the same reasons the organisers might hope! 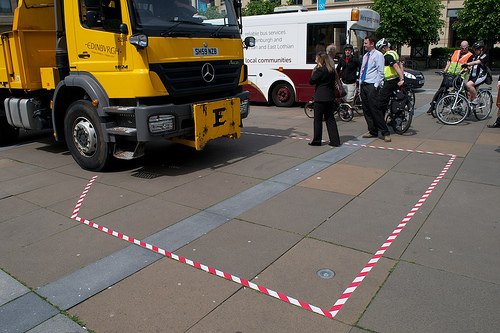 Above you can see the tipper with a taped area laid out in front of it. Compare the taped area with a cycle safety box as found at many junctions: looks pretty similar, doesn’t it? 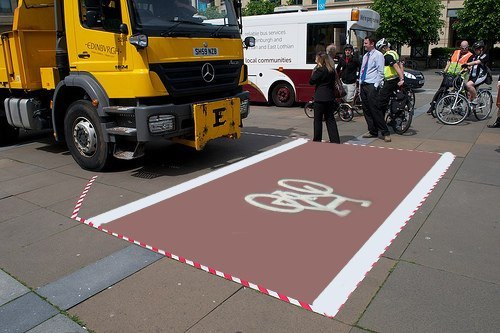 It goes without saying that anyone professionally engaged to drive a large vehicle in close proximity to vulnerable members of the public is under huge responsibility not to kill any of them.

This is why you will never find lorry drivers, who are aware of the limitations of their vehicles and the dangers they pose, creating deadly situations by illegally encroaching on cycle safety areas at junctions… right?

Anyway, I digress! The next photo sets the scene for the most interesting experience of the morning, in my book. Here you can see the parents of Andrew McNicoll standing more or less exactly in the ‘killing zone’ on the inside of the tipper. (Andrew was an expert rider who was tragically killed on Edinburgh’s streets; a truck driver was later arrested away from the scene – see Andrew Cyclist). 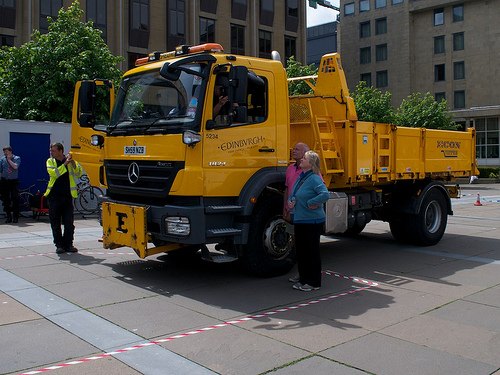 I jumped into the driver’s seat to see what he/she would be able to see from a normal driving position in the nearside mirrors.

To my great surprise, you can clearly see both the McNicolls in the ordinary side mirror as plain as the nose on your face. You can even see, very clearly, cyclists coming up the inside of the truck from quite some distance behind as part of the photo shoot. 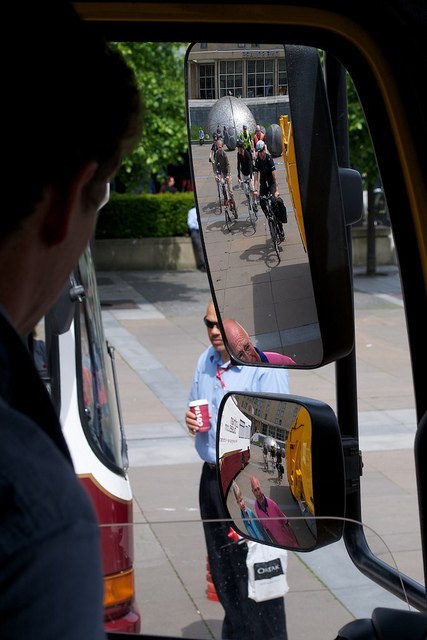 Okay, you’re thinking. It’s inexcusable for a professional driver to take a life when they’re that screamingly obvious in the mirrors. But what if they were a bit further forward, maybe even in front of the mirror (the truck driver hasn’t crept up to the point that they’re beside the door yet?)

Oh. The side mirror not only shows the McNichols at the back of the cab as clear as day, it shows everything in great detail right out to the front of the wagon! 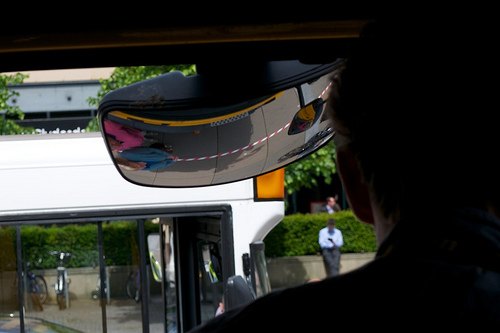 Not much place for a cyclist to hide there, especially as the professional driver, knowing he represents under 5% of traffic movements but is involved in 2/3 of killings, will be especially careful to check those mirrors before swinging left.

What if the cyclist is out in front of the truck though, in the middle of the safety box (as advised by numerous sources including the IAM and Bikeability)?

What if the lorry pulls up to a safety box right behind a cyclist, although not on top of them (yet) – what will the driver be able to see? 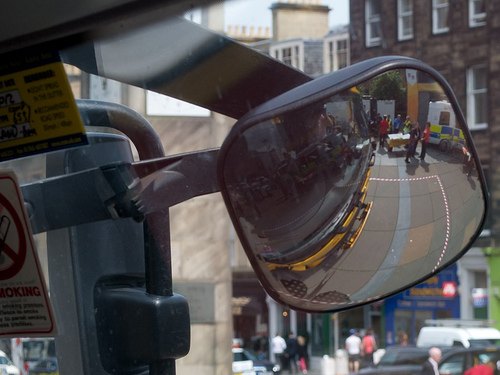 Crikey, yet again there’s a mirror which covers this exact area.

In case anyone offers the appalling excuse that not every driver has the full complement of “basic safety mirrors” fitted, they’re not called “basic safety mirrors” for nothing you know. 66% of urban deaths involve a heavy goods vehicle remember – no driver or company can claim ignorance when it comes to their priorities towards public safety.

The police, CPS/fiscal and judiciary would never accept that an absence of “basic safety mirrors” leading to a preventable collision by the driver was anything other than a serious aggravating factor against a backdrop of ongoing deaths in these situations… right?

They’d never let a killer driver off the hook because his sub-legal complement of mirrors is seen as a mitigating factor… right? 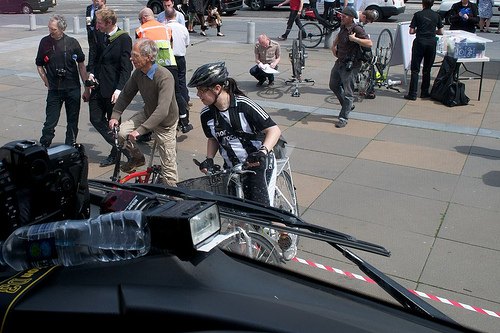 Above you can see the plain vanilla view out of the cab. The line on the ground seems to be where the dash obscures the ground. It’s actually extremely easy to see cyclists who are in this area, and there can be no doubt that a lorry driver who kills someone in a botched overtaking attempt is, in common with all “hit from behind” killings, almost automatically responsible for the life they’ve taken.

Incidentally, it was good to see a Lothian bus there, not only because I got to sit in it but because a member of staff was on hand to discuss their frankly refreshing approach to safety. These guys know what they’re doing – Lothian Buses has a notoriously good reputation amongst Edinburgh cyclists (in stark contrast to First and Stagecoach). See their training video:

Thanks to both the Council and Lothian Buses, Spokes, Lothian and Borders Police (for this at least!), CityCyclingEdinburgh and everyone else involved in National Bike Week activities… food for thought I hope.

I came away convinced that if I’m ever responsible for driving a truck like that, there will be no possible excuse or justification for taking someone’s life due to “blind spots”, although I’m just about as convinced that you can kill with impunity in the UK without really requiring to give a good excuse…

12 thoughts on “Sorry mate, I can’t see your blind spot”