Did you know that the swoopy-framed Challenge Furai has a straighter chain than the Bacchetta Corsa? A searing exposé…

One of the perpetual selling points of of the ‘stick bike’ highracer is that it has a straighter, more efficient chainline than a bendy European frame. When reviewing the 700C Bacchetta Corsa recently, I made the observation that it seemed to have a more twisted chain than the Nazca Fuego, based on my side-on comparison shots.

Actually, I don’t believe that there’s a significant drag involved in any single idler system relative to the major choices like seat-BB delta, seat recline, stiffness and so on, and especially not compared to the use of chain tubes – but the suggestion that this plank of received wisdom might not be correct intrigued me. 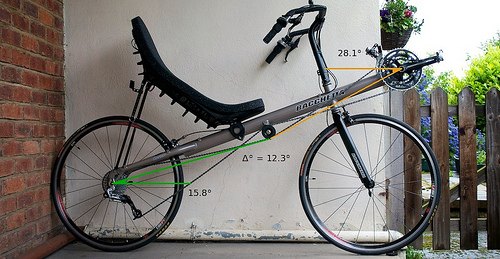 Here’s a side-on shot of the Corsa. I’ve used different coloured ‘chalk’ to mark the two angles being measured, which are from the BB axle to the rear axle via the surface of the power idler.

Why the axles? Mainly for ease of measurement, but also because it avoids any question of favouritism (as the Gaucho has a smaller road-type rear cassette, it will otherwise look ‘better than it is’).

Strictly speaking this will introduce some inaccuracy between bikes, as the different distances between idler and BB axle / rear axle will mean that a 52t big ring is actually ‘larger’ on a small frame than a stretched out one, in terms of the angle.

I don’t think this error is significant in terms of real world riding, of course.

Why not the axle of the power idler? Well, here I thought each manufacturer may provide their own kit (as opposed to a cassette or chainrings, which are generic) – for example, Nazca now supply a neat in-house toothed power idler, although it’s not actually fitted to this Gaucho. 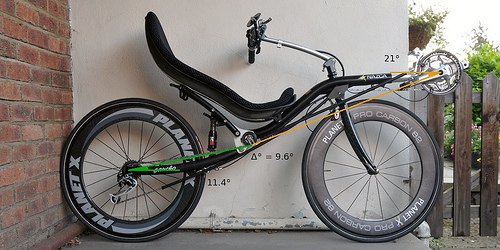 As you can see, things are looking good for the “inefficient” Euro chainline, which is actually straighter than the stick bike by almost 3°.

“Aha!” you’re thinking, “as any fule kno, the suspension bike will obviously look better with nobody riding it!”

(Actually I hope you’re thinking, “As any fule kno, a change of angle of a few degrees is not going to make any real-life difference anyway!”, but I digress).

Fortunately the air shock on the Gaucho has an o-ring which shows the maximum compression of the biggest impact it’s had riding around central Edinburgh.

Using this, and multiplying the vertical distance by the extra lever length of the chainstays (as annotated on the diagram) I positioned a virtual axle and re-measured the angles: 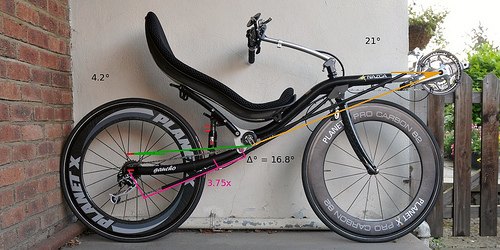 So, if the Dutch bike was hitting a pothole and you were simultaneously trying to apply maximum power to gap the group and start a heroic solo breakaway, it would potentially be 4.5° worse an angle across the power idler than the Corsa.

In reality, the preload on the shock when riding the Gaucho normally is likely to be somewhere in the middle… it depends on the rider’s choice of pressure in the air shock (at max pressure, there will be very little ‘sag’)

Probably somewhere right about the angle of the Corsa then!

Perhaps you’re muttering, “Unfair, they both have 700C wheels! I bet a smaller wheeled Euro bike will have far worse idler bends!”

Happily, I’ve done the same analysis for the Challenge Furai: the geometry makes it too complex to calculate a virtual angle, but there’s no way the small amount of ‘sag’ on this bike will drag the superb chainline anywhere near as “badly” as the Corsa or Gaucho: 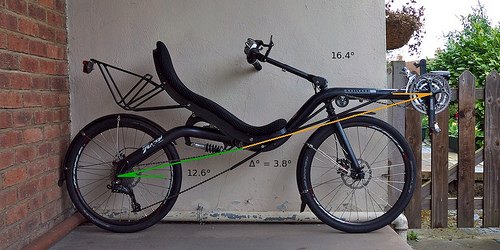 Obviously you wouldn’t run chaintubes if you were even vaguely worried about drivetrain drag, but that’s hardly the point. (If you’re keen on aerodynamics you would take the most reclined bike you could get and stuff the chainline anyway – it’s hardly going to matter over 200m or the kilo.)

As I said in the introduction, I don’t think this is something that you should worry about, unless perhaps you’re regularly placing highly in events, and a few seconds over the course of a crit or a few watts in the final max-effort sprint for the line is going to make or break you.

But there you go. Stick bike chainline is not necessarily as good as an s-shaped Euro frame, even if you are obsessed with chainline instead the important things like handling and aerodynamics.