After a little bit of work my Carradice Barley has proven to be an excellent bar bag!

Much to the horror of the CTC, my subversive utility / commuter assassin bike doesn’t have a pannier rack. This is purely an aesthetic choice – with a hub dynamo, hub gears, chaincase and full mudguards it’s not exactly going to slow it down! 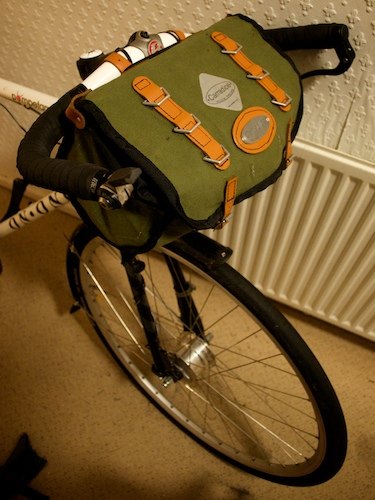 Nevertheless, as it is pretty important to be able to carry stuff on a utility bike, I decided to add either a bar bag or a basket. Honestly, I was thinking about a basket. The weatherproofing was the main thing…

So, there are all kinds of bar bags available but generally they are overengineered, with quick release systems that leave a huge baseplate on your handlebars. I also happened to own a Carradice Barley saddlebag which is tantalisingly close to what a nice commuter / utility bar bag might resemble, if it wasn’t for a couple of snags: 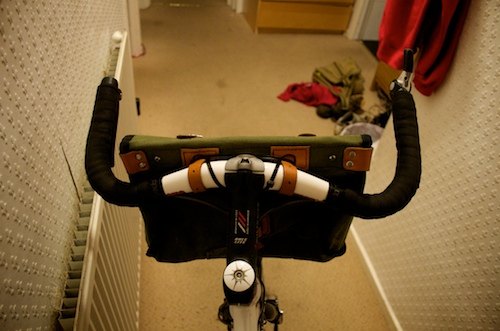 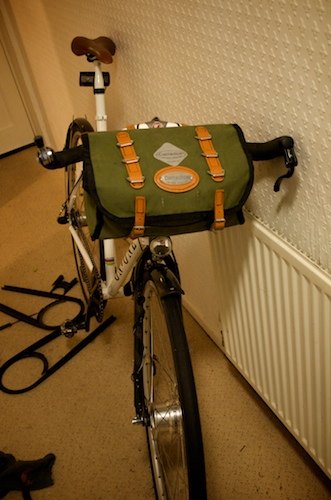 As you can see, however, I managed to get around all of those.

First, I sewed a couple of thin strips of material into the base of the bag, and cut a little bit of wood (in imitation of the existing upper dowelling) to keep the empty bag at full width. Not pretty, but pretty functional. 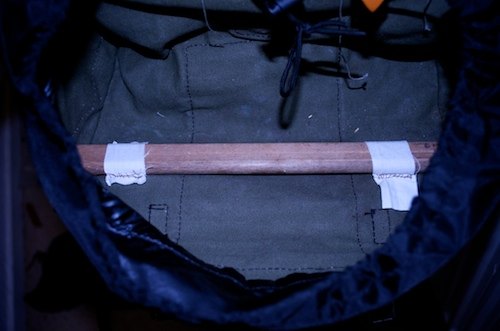 Second, I wrapped a couple of cable ties around the stem and the bar straps in that kind of hard-to-describe loop which means they hold the bag up nicely between the grips (you can more or less see how this works in the second picture on the page).

Third, I took a short pair of scissors and cut off the side pockets / picked out the stitching. I’ve never used the side pockets anyway since the buckles are sufficiently fiddly that the separation convenience isn’t worth much over the time advantage of just sticking everything in the middle!

Voila. One more traditional yet subversive bike part to prowl the pathways with… 🙂 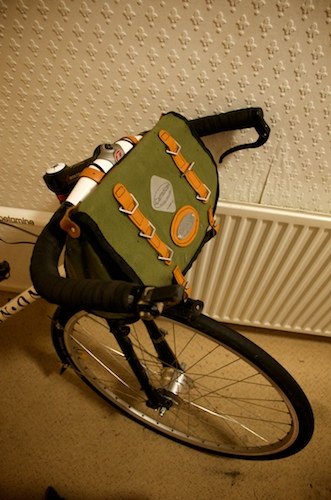 In terms of size and other practical stuff – it will take milk or bread but milk and bread together is starting to risk a bit of squashage. I keep my pump strapped to the dowel under the lid and other assorted tools in there full time, then pop clothes etc. in and out in one of those long-life carrier bags.

It doesn’t make any appreciable difference to the handling (it might, if you were transporting gold bullion).