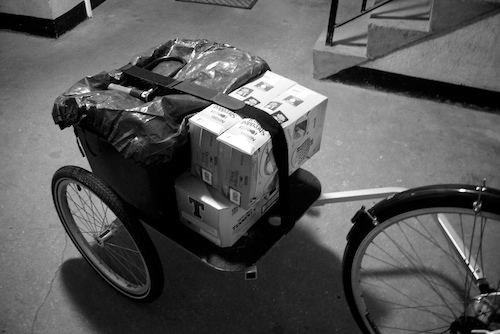 It really does pack down very slim, and the best of it is that the wheels pop off at the press of a button – it’s not even as inconvenient as a conventional “quick” release.

No doubt some people haven’t the room for a Y-Frame, but nobody I know springs to mind. The trailer needs about 3″ of width against a wall somewhere, while the wheels, with axles removed, are around the same. 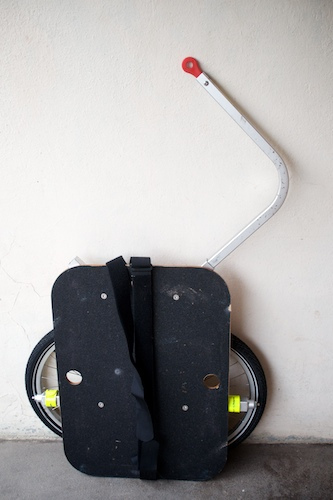 Let’s not kid about – it takes five seconds to hitch to the bike and less to remove, you have complete freedom to turn while riding, and if anything happens like your bike falling over, it just bends without damage or complaint.

Even more excellently, nothing more is involved in changing the hitch between bikes than unscrewing the axle nut / QR nut on that side, nothing to adjust or fiddle with.

In the picture below, my bike is leaning over further than can really be achieved while riding, just for illustration: 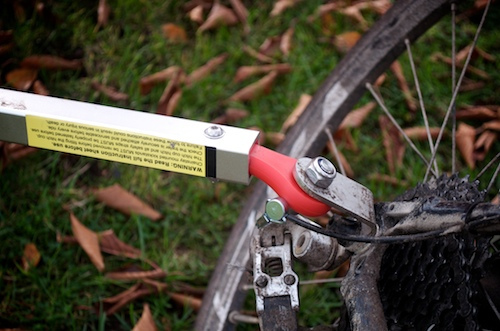 Note that I’ve mounted the hitch on the drive side of my hardtail, which has a couple of advantages:

However, I haven’t reversed the hitching post in the above photo, which means the trailer is resting on the retaining pin, rather than the hitch. The red elastomer should be on top, and the large nut hidden underneath (just in case anyone tries to imitate it literally…)

Unfortunately, my shiny new piece of urban transport weaponry doesn’t have enough axle thread to accommodate a right-hand fitting, so I’ve had to swing to the left for this bike. Happily, it’s just as easy to move the towing arm as it is to hitch and unhitch (in fact, it uses the exact same retaining pin). 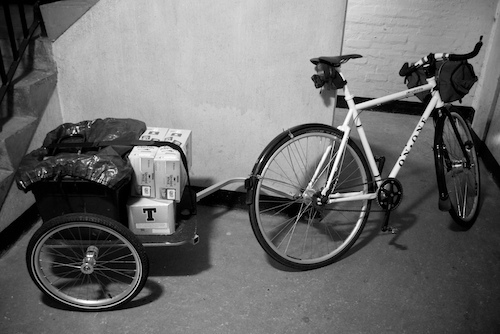 One of the bigger annoyances is that the Y-Frame makes no provision for the use of a rear light, even though this is a UK legal requirement.

While working around this is not rocket science (if you use a regular box, for example, attach your light to that), it is frustrating to have loads of old red LED flashers, none of which can be used on the trailer by default. Strangely, the trailer does come equipped with double reflectors – although these are fixed too close to the trailing edge and can hit the ground when the trailer is unhitched – so it is obviously anticipated that you might want to transport things during the other six months of the year.

For the time being, I’ve just added two obnoxious ankle bands to the axle members. While you might not think these would be especially visible, for all but the last few yards of a motorist’s approach, they are actually annoyingly bright: 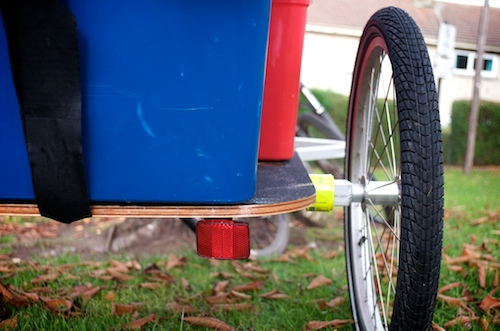 There is hope, as Nick Lobnitz commented on my earlier article “I’ve been working on a combination light mount/flag mount this summer, a few prototypes went out to customers and I’ll probably do a series production over the winter”.

Some might argue that a trailer which costs almost as much as an entry-level bike could come with a 1″ cylindrical light mounting point for no extra money, but with small volume stuff like this, a gradual iterative approach is probably fair enough. 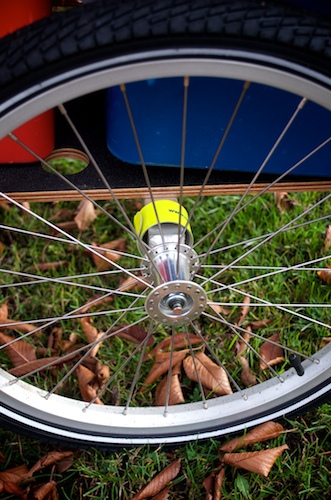 You really can forget you’re riding with a trailer – that’s how nice it is. It affects the bike so little that I can still trackstand at red lights. Or at least, fail at it no more badly…

What about the weight though?

In a world where 50g saved from a groupset is worth £1000 or more to a keen cyclist, it will come as no surprise that hitching up 7000g of trailer, plus luggage, may have a noticeable impact on performance.

What is moderately surprising is how little the impact really is. On the flat, I have still been able to duel with my commuter peers, and on the hills, it seems to cost about 1 gear.

I’ve taken the Y-Frame, unladen, on the weekly circuits of Arthur’s Seat and while it was a bit of a sweat, it was doable…

5. Think of a huge amount of stuff. Now double it.

That, scientifically, is about how much stuff you can carry on a large Y-Frame. Can you even see the tiny bike at the front of this lot? 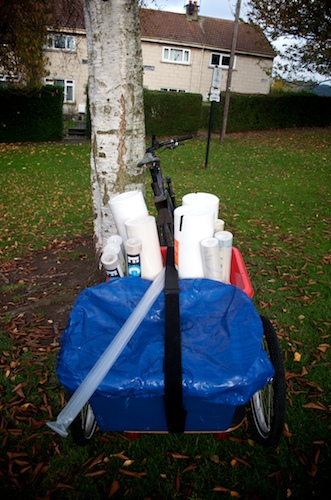 So far the heaviest load I’ve managed is 27.5kg (for a gross laden weight of 34.5kg). I had to climb a couple of gears lower, but it was no big deal.

Regarding stopping distance – you weigh as much as a cyclist 1 stone heavier who isn’t towing a trailer, plus however much your cargo weighs. If you’re an average 12 stone, you’ve got about 35kgs of cargo capacity before you weigh as much as a rugby player cycling to training. They just use ordinary brakes, so can you.

The council sent us a couple of recycling boxes a year or two ago, but as far as I’m aware they’re never collected (or certainly not at the frequency we require). This led to many excess car trips to the local supermarket / recycling depot at Cameron Toll, often tempting me in for a snack…

Now, with the aid only of the velcro strap that comes with the trailer, I’ve discovered you can carry not only one Edinburgh Council standard recycling box, but two! This beefy loadout (paint and decorating materials for a bedroom plus most of a week’s shopping) is a good example – the boxes are just existing ones seeing a new lease of life, bonus. 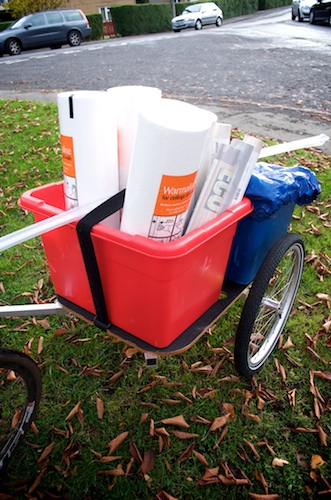 On the shopping front, I have taken the trailer as a handcart into the local Sainsbury’s and into B&Q, by rotating the towing bar 90 degrees, so it sticks up as a kind of handle. But while it worked well for the latter, it wasn’t such a success at the regular supermarket aisles. Consider the small Y-frame if this is a priority.

However, the power of the Velcro strap means that you can just park the trailer (yes, someone could steal it. I’m not really worried) and fire the box into a shopping trolley. You use the shopping trolley to take the paid-for, repacked box out into the car park, lazy motorist style, then just fire the box back on the trailer. Takes about the same time as opening the boot…

Motorists are so well behaved that it’s almost worth towing full time. They hang back, they pass really wide – as well they might, with a tin-opener of a trailer heading for their paint work!

This isn’t because they love bicycle trailers, of course. If they became at all popular, you can be sure that prejudiced howls would appear in all the usual channels. It would still be lovely to ride on the road though, because of the physical reality of it: 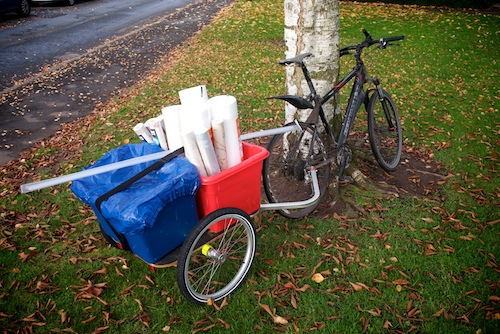 (Interested parties may wish to note that the trailer has now 1/15th paid for itself. I’ll keep you posted!)

4 thoughts on “Life with four wheels”