Earlier this year, RaptoBike posted a tantalising photograph on BROL. It looked like a stock Raptobike Lowracer which had been fitted with the Midracer fork to accommodate a full-size front wheel… and it was!

Earlier this year, Arnold Ligtvoet of RaptoBike posted a tantalising photograph on BROL. It looked to all intents and purposes like a stock Raptobike Lowracer which had been fitted with the Midracer fork to accommodate a full-size front wheel… and it was!

Well, I just had to get one of those, so after exchanging a couple of cautious emails I popped an order in the post for one midracer fork…

A few days later the fork arrived, and I was able to fit a spare 700C drive wheel to my Raptobike with only a few minutes’ effort. What a difference!

Unfortunately I have quite short legs (I’m 5’10” but long-bodied, which used to be great as a kayaker…) which meant some hard interference between a 700C front wheel and 175mm cranks: 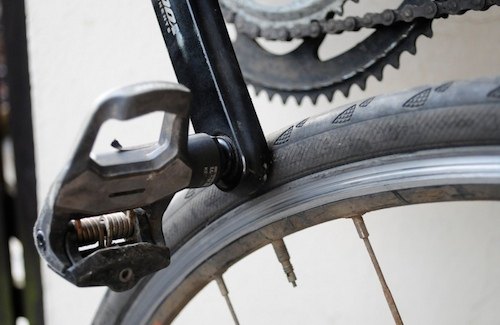 With a 300km PBP qualifier just around the corner, this was no good at all – however I was able to fit the 559 drive wheel from my hardtail without overlap, and it was in this configuration that I posted one of my fastest ever brevet times – a moving average of 16.9mph over 185 miles on the legendary Mull It Over (which with ~9000 feet of ascent is not flat, although it’s far from mountainous). 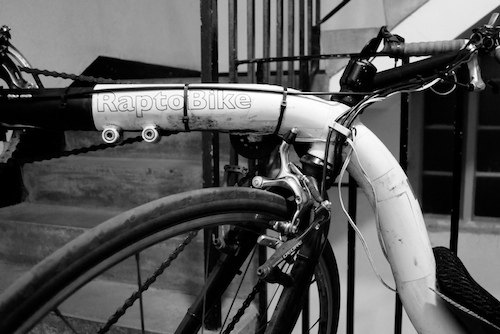 One word of warning: you can’t use an ordinary dual-caliper brake with the midracer fork as the ‘arm’ fouls the main tube! A disc wheel slots in and out no bother, but if you want to use the rims you need to find the unusual Tektro R725 time trial brake (fortunately sold by Arnold on the Raptobike webshop). This feature is common to the Raptobike midracer too.

Curiously, I had to drill out the fork crown hole which was more mudguard-sized than brake-sized. Easily done on a burly steel fork but, well, surprising…

What a difference a wheel makes

The addition of a big front wheel raises my seat to ~40cm (up 15cm) but this measure is slightly deceptive as it has very little effect on the seat back (the seat just gets more reclined, which is how I like it). In the end I have lifted the seat one notch at the back but I can still happily balance on one hand with 2x700C wheels, as I have become accustomed with a 406 up front.

Roll over the image below and it will flip to a brand new stock lowracer (courtesy of Laid Back Bikes): 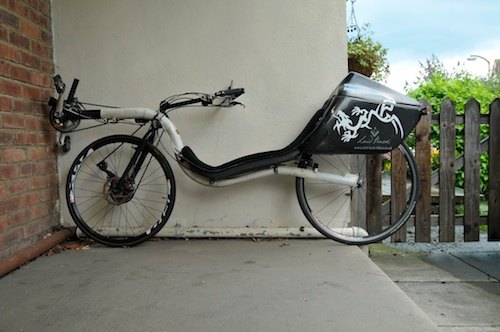 If you do not like a reclined seat, obviously it is dubious to fit a much larger front wheel and cant the whole bike backwards. Certainly a seat can be redrilled to mount a little higher up and so you can perhaps get ~25 degree seating with a big front wheel. Mine is closer to 15 degrees as far as can be judged. 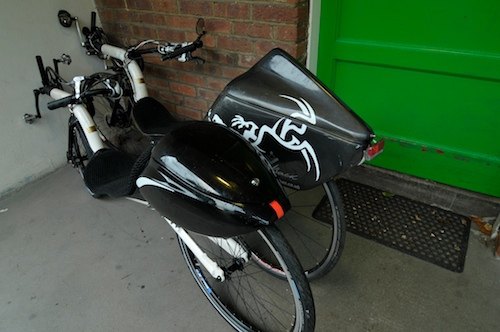 Another important point is that this modification is not handling-neutral. Lifting the front of the frame shallows the angle of the (integrated) headtube and increases the trail of the front wheel. This makes the steering noticeably sharper and more ‘hands on’. I commented at the time that while I can’t ride the stock lowracer no-handed anyway, I *definitely* can’t ride the big-wheel conversion no handed!

Whether you get on with the handling or not is probably a personal thing. I found that I soon adapted to the revised steering behaviour and have since completed two 300km, a 400km and a 600km brevet comfortably, as well as rush-hour commuting through central Edinburgh. I can ride just fine one handed and I can look over my shoulder without wild swerving.

However, if you’re looking for a placid easy roller… (but then why are you spicing up a lowracer if so?)

First, the ride is undeniably smoother – it’s not so much “comfier”, more that it rolls noticeably better when the road surface is falling apart and the front of the bike stays much more composed over moonscape. A bit like having a fat, soft tyre on the 406 wheel except you don’t have to use a fat, soft tyre. (With clearance for a 559×50 Big Apple though, you can certainly have fat if you desire!) 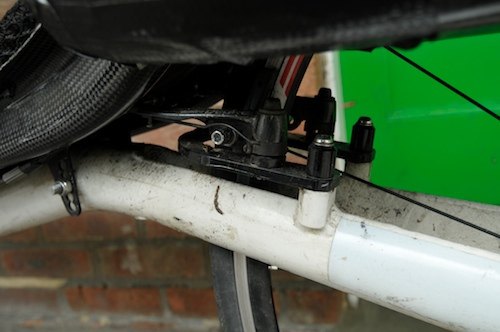 I’m using v-brakes on an extender to hit the 700C rim. On current production Raptobikes, a bridge has been added for a standard dual caliper, as you can see on the rollover)

Second, you can take advantage of more commonly available 559 or 700c spares – tyres plus inners. (In fact, it’s even better than that because you can easily share an inner tube in a pinch between the two sizes). When you’re in the middle of nowhere in the middle of the night, this is a bigger consideration than it might be for casual riders!

Third – you can either have superior aerodynamics (if you recline the seat towards zero degrees) or improved clearance around the rear wheel (if you raise the seat to keep the same angle). Previously to get the seat angle I wanted I ran the risk of rubbing the tyre against the seat back – now there’s plenty of room. For a long fast effort, you can drop right behind your knees.

To be frank, I’m not a fast rider and any benefit in aerodynamics is probably quite slight. In any case it only makes the bike more aero relative to stock – it’s not going to suddenly transform into a Nocom 😉

Last but not least, however, you can gear relatively normally for the larger wheel. With the 406 stock drive wheel I have a 70t big ring, now I can get the same gearing from a standard double (and save half a pound of metal in the process!)

Of course, winning a bit of easy rolling audax goodness and relative commonality of spare parts wasn’t the only motivation for converting to a dual big-wheel format here. No, I had my eye on a pair of ridiculous full-carbon tubular race wheels from doyens of budget black stuff Planet X… something for trips to the coffee shop or easy rolling on Portobello promenade 😉

After early success with the long fork, I switched to short cranks (150mm) which actually suit me better anyway – as a bonus it’s also possible to run 700c wheels with no overlap. In the space of a few minutes, the disc caliper and lever are swapped with a rim version, the rear pads are flipped to carbon-specific ones and the wheels are ushered out of the dark corner where they gleam enticingly at me daily… 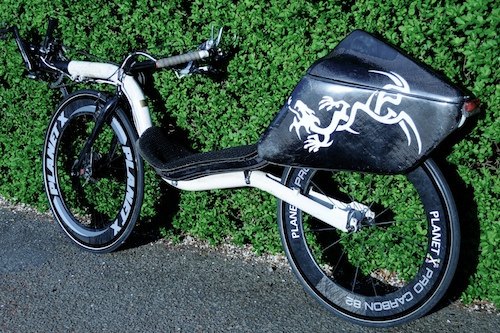 Finally, I thought it would be worth posting up a comparison between the converted lowracer and the Raptobike midracer (which I’ve never seen in person – but I found a photograph of a prototype): 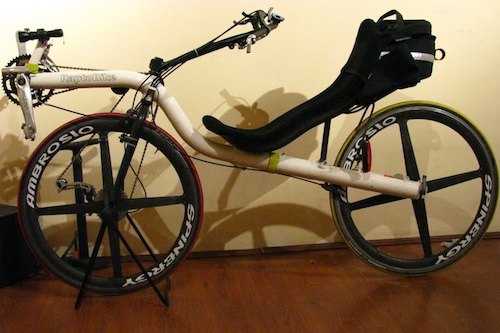 Here you can really see the difference in seat height and recline. The converted lowracer is a one-mission sort of bike, for people who want this sort of thing – while the midracer will benefit from ordinary bike handling and a wide variety of setups “out of the box”.

Overall though, if you’ve already bought a lowracer and fancy spicing it up, the cheap cost of the fork swap (providing you’ve got spare wheel etc. to stick on there already) makes for a very accessible and exciting ride…