What exactly is the cost in friction / drag of running a hub dynamo system? Perhaps not as much as you expect…

I’ve already written a little about the weight implications of choosing a dynamo hub (in short: there needn’t really be a significant weight penalty).

However, there is still another objection to dynamo use – the friction which must constantly be overcome as you ride along. I hope to demonstrate that dynamo hub drag is not much of an issue for the majority of riders, and more of you should be giving serious thought to investing in one (especially as you can now enjoy a discount from our favourite mail order stores).

Power loss versus a regular hub

Let’s start by putting some hard numbers on friction losses in ordinary hubs, before moving onto dynamo hub losses.

Manufacturers of ceramic bearings have helpfully quantified this (because you can’t sell a fancy bearing without demonstrating how ‘bad’ ordinary ones are) and it seems that losses in an ordinary hub are around 1W at 25mph [1]. 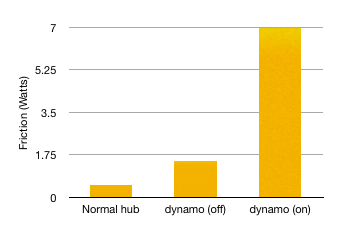 The ratio of darkness:sunlight during the summer months most favoured by long audax rides is not far off 1:5 (civil twilight in mid-June gives 19.5h of light and 4.5h of ‘dark’).

This gives an overall hub dynamo drag of under 2.5W (averaged across all the hours of a day), so let’s use that as the basis of comparison.

A rider on a long distance ride might be producing as little as 100-150W, in which case the drag of a dynamo is ~1.5-2% of the rider’s output. Let’s take that at face value and imagine the impact of a 2% speed penalty:

1% of an hour is 36 seconds, so double that means you will fall back 1 minute 12 seconds per hour compared with your battery powered self: twelve minutes over a ten hour event. 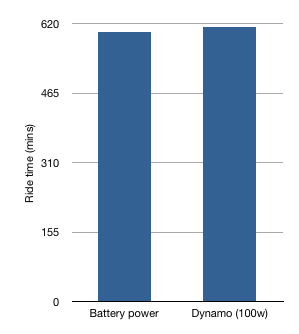 A robust 200W effort reduces the impact to 0.75% (27 seconds per hour) or 4.5 minutes over a ten hour event – should you be one of the few who can put in that kind of effort for a whole event!

Another way this is popularly expressed is in terms of synthetic gradient, with the hub dynamo friction made equivalent to an extra X feet per mile of ascent. It turns out this is not such a difficult calculation, and comes to around 28cm per mile for a dynamo during daylight and 2m per mile for a dynamo at night. Scroll to the end if you want to see the maths!

Comparing with other sources of friction

So far you are perhaps thinking “OK, so 5-10 minutes over a ten hour event isn’t such a big deal, but it’s still something I’d rather avoid”. Fair enough.

This makes it a good point to contrast hub dynamo drag with some of the other things that can hold you back. For instance, it was recently reported that some types of chain lube can add as much as 10W over the factory lube [3] while, at only 12.5mph, the difference between a Continental GP3000 racing tyre and Vittoria Open Corsa racing tyre is already 20W [4]. 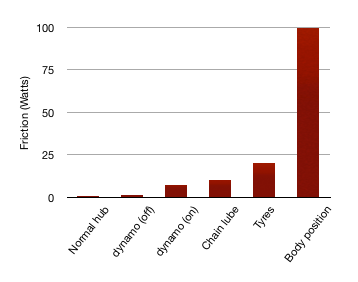 Remember in the graph and example above we’re just comparing two racing tyres – the effect of changing from something like a Gatorskin or many other types of puncture-protected tyre will be significantly larger. Finally, I’ve already written about the tremendous efficiency advantage of the recumbent riding position: my own drop-bar racer is left for dead at roughly a 100W deficit to a midracer. 100W is a lot more than 2W yet many riders seem just about as loath to try a dynamo as they might be to try the dark side…

Most people, of course, can’t tell the difference between different brands of chain lube and perhaps not even between comparable models of tyre. Certainly it’s a popular comment by dynamo users that they can’t tell whether their lights are on or off (in daylight!)

Even sample variation between production runs of any particular tyre probably exceeds the drag of a hub dynamo with the lights on… but how many of us spend as much effort making sure to buy just the right examples of a particular model of tyre as we do avoiding dynamos?

For no-holds-barred maximum efficiency, obviously you want to bring your power with you in the form of batteries; but for 99.9% of us, there’s little real reason to avoid all the goodness of a fully self-powered bike…

After holding out for years, I bought one nervously (and now have three…)

As I mentioned up-page, even Wiggle are in on the action: get yours here. 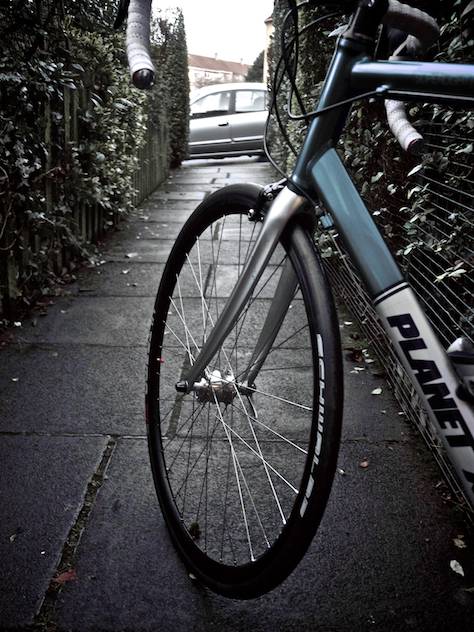 We can take advantage of straightforward formula here, with the following parameters:

Then it follows simply that the equivalent height gain per mile is 28.8cm, so:

Note these are roughly the 1 foot / 6 feet measure you will see referenced in popular articles! It’s easy to subsidise different values; for instance swapping chain lube on your bike (10W, if you’re unlucky):

I’ve just finished putting the last touches on my new audax wheelset, which will be seeing some heavy action in 2013…

I should probably also offset the substantial cost of new batteries I won’t be buying against the cost of the parts (totalling £300.77). I sourced the hubs separately, but got rims and spokes from DCR Wheels in the UK, a pleasure to deal with 🙂 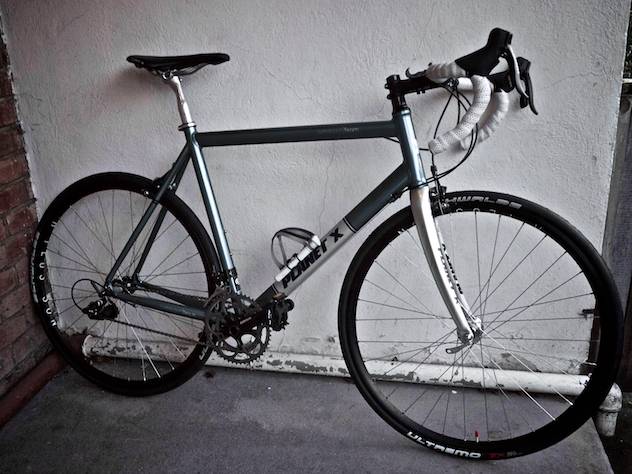 END_OF_DOCUMENT_TOKEN_TO_BE_REPLACED

Just how much of a weight penalty do you pay with a hub dynamo? Not (necessarily) much at all…

I’m building a new dynamo wheel and thought it would be interesting to compare the weight with the Li-Po battery LEDs I used previously.

Based on the Shutter Precision PV8 hub (not the light weight SV8 version), I expected the dynamo setup to be quite a bit heavier, but in fact the weight difference was just 25g. 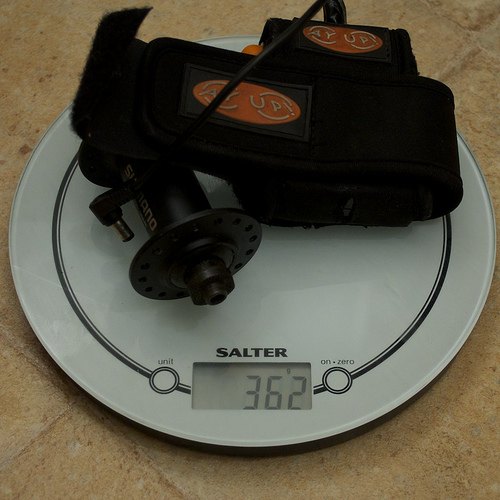 Let’s throw in 10g for the tail-light wire and you get 35g – roughly the weight of five 2p coins. If you wouldn’t throw away that much change after a commercial control or cafe stop, you probably shouldn’t try to justify a battery setup on weight grounds alone 😛

(Yes, it’s true that there are many other reasons why you might prefer batteries – I used them exclusively myself, until recently).

Of course, the battery pictured is only just enough battery for one summer night. In reality I took two on all long brevets, which tips the scales in the dynamo’s favour by a cool 100g… 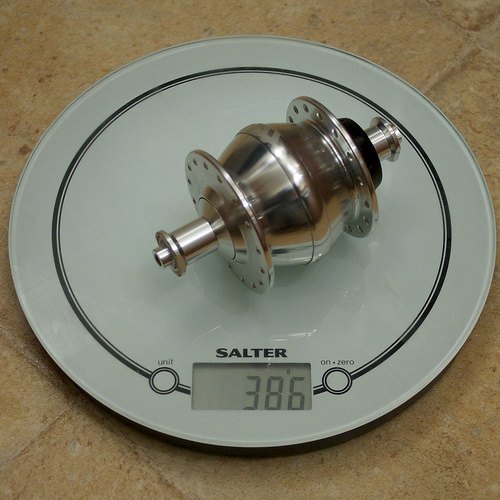 This doesn’t touch on the two real issues that split dynamo / battery use: drag (which is now the subject of a dedicated article on hub dynamo friction) and efficacy, but I wanted to take a few minutes to illustrate that what many percieve to be a significant downside of dynamo use just isn’t…

Even Wiggle are getting in on the hub dynamo action: get yours here.