After my dismal experience with the Sturmey Archer S2C, which failed dangerously, and having already gone through one terrible S5C hub before that, I decided to branch out in the coaster brake hub gear department, hence this SRAM Automatix review. 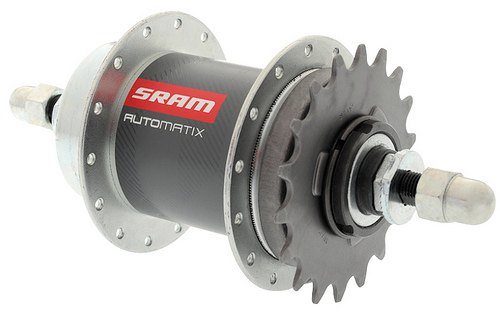 The SRAM Automatix offers two gears with a 137% step (that is, it will yield 100″/137″, or 52.5″/ 72″). The unique selling point is that instead of selecting the gear with a shifter, or even by back-pedalling as with the S2C, the hub changes gear based on your speed… automatically!

Again, the attraction of this sort of hub is that you get two gears and a brake with no cables whatsoever. That’s nice for a utility bike, especially as my commute is downhill all one way and uphill the other (so I never found a gear ratio on my old fixed-wheel bike that was decent both ways).

Obviously, the range is far less than you’d get with a single ring and cassette (which could do 30-106″), but that’s ok for me.

At face value the SRAM Automatix is heavy compared with normal hubs, but lighter than some hub gears at 1.3kg.

The above weights are for Deore and BB7, fairly typical kit. So there’s actually a little bit of weight saving to be had from the Automatix overall (even with rim brakes, not discs) – although you still wouldn’t want it on a performance bike due to the limitation of only having two gears!

As with the S2C, low gear is direct – the internal mechanism locks out, transmitting force on the sprocket directly to the hub shell with no flex or movement. Pretty much as efficient as it gets.

High gear steps up through a simple mechanism and, again as with the S2C, I don’t notice any friction loss when riding it. I’m sure a lab would find plenty, but it’s below my threshold of detection.

You can easily add spacers since the threaded axle is bog-standard M10, unlike Sturmey Archer’s obscure only-use-in-the-days-of-Queen-Victoria imperial thread. (In any case, it seems to be routine to squeeze a frame 5mm either way these days). This makes the SRAM Automatix a better choice than the S2C if you’ve got a normal frame rather than a track one.

Again like the S2C, the SRAM Automatix doesn’t have seals over the bearings, so it’s likely to need a lot more attention through winter than your average hub.

The Automatix shift is really nice – quiet and solid even putting a lot of power into the pedals (there’s no way to ease off for the shift as you accellerate). It shifts up regardless of what you’re doing, but it only shifts down if you let off the pressure, so it won’t spill you on a steep climb when your cadence drops.

Unfortunately the shift point is set ludicrously low, at a hair over 10mph. This means it’s almost impossible to get a gear combination that’s useful for actual riding, because as soon as you set off, it shifts up. If you choose a top gear that works out at 60rpm for 10mph, you’ll hit 100rpm at just over 16mph: 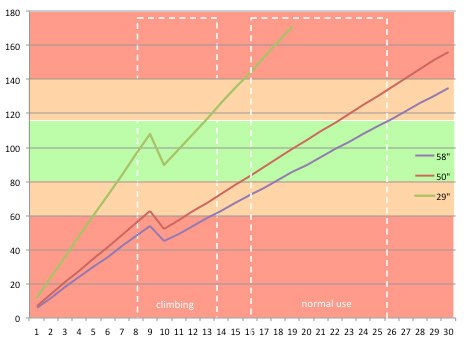 The graph shows bands of cadence (red = knee death, amber = OK at a push, green = preferred) across two ranges of speeds (the typical speeds for me, climbing and otherwise). The only one that offers reasonable cadence at climbing speeds doesn’t let you ride around on the flat at all!

On the other hand, imagine if the shift point was around 15mph. Much better, in the amber or green for most of the range (I’ve added a classic 72″ fixed to demonstrate how the Automatix climbs better and allows you to spin along faster on the flat): 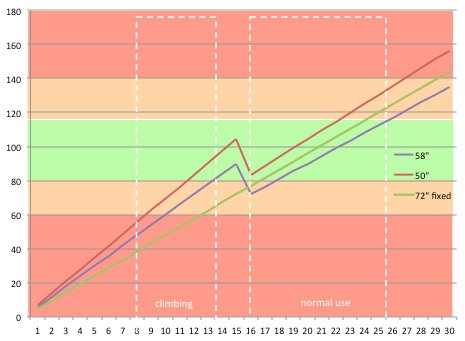 Luckily, if you’re willing to get your hands a little dirty, you can make this a reality with minimal hassle…

Removing the two left-hand nuts will allow you to remove the mechanism intact (you don’t need to play around with the actual hub mechanism which is controlled by the RHS nuts).

The picture below shows the weights clearly (the big “commas” in the middle!), held in by a spring: 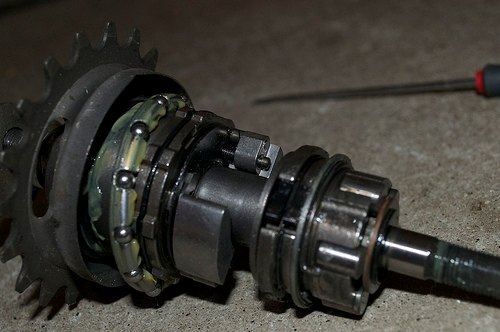 High gear is achieved when the rotation of the hub overcomes the spring, and the weights pivot. I’m holding them open in the photo below, since I couldn’t think of a good way to photograph the hub in motion: 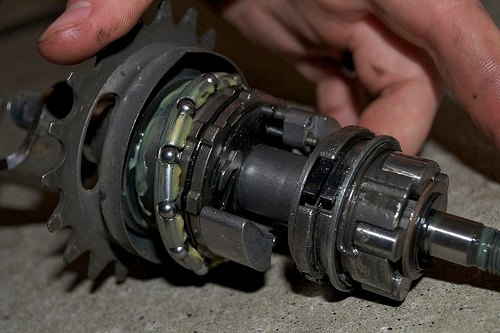 Only one weight has a spring, and the weight itself can be freed easily (it’s held on by a tiny circlip). This image shows the weight half removed, with the spring visible below: 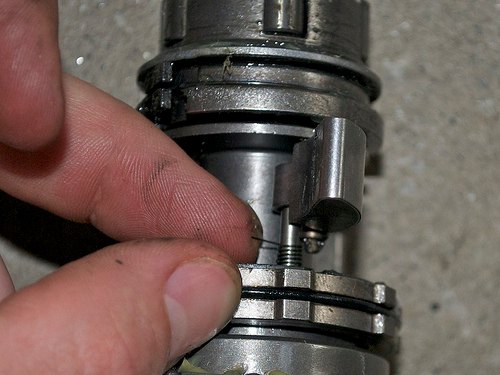 Adjusting the shift point of the hub is as simple as just ‘unwinding’ the spring firmly to give it a different set, then re-assembling. 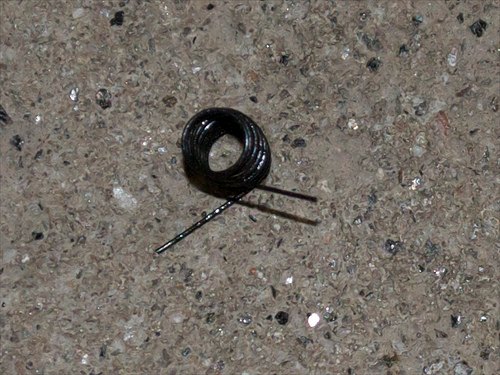 I found that a change of about 45 degrees in the angle of the ‘arms’ of the spring was enough to lift the shift point from 10 to 15mph, so you’re not trying to unwind it much (although it will take a surprising amount of force to do so). 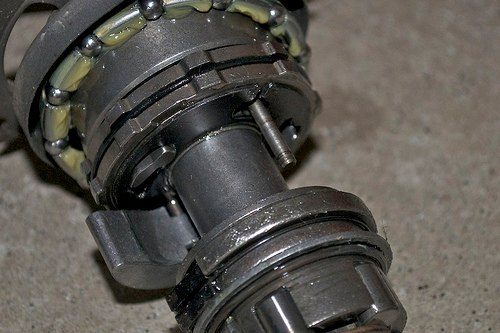 (Just for illustration – you can see the way the shift works in this image: the weights open out, causing the thin metal plate just above them in the photo to rotate anti-clockwise, adjusting the angle of the pawls visible at ‘9’ and ‘3’ o’ clock).

Stock, the hub is not very useful unless you’re happy to cycle slowly. I wanted my gears around 60″ and 82″ (bracketing the typical single speed of 66-72″) but with this gearing you never get above 60rpm before the upshift, which dumps you at 40rpm!

Climbing a gradual hill was an exercise in agony as my speed would invariably be 10-14mph (the hub never hits a comfortable 80rpm until you’re doing just under 20mph!)

However, now the hub has been tweaked for a sensible shifting point, I can warmly recommend it.

The coaster brake is fine (not as good as the S2C, but fine), but the shifting is worlds better – just so firm and assured, up and down. The auto-shift becomes second nature as you power away…

You also avoid the S2C problem of changing gear every time you brake, which is pretty annoying.