In this article I use (PowerTap hub measurements in loosely controlled outdoor conditions to provide an insight into the performance of the RaptoBike Lowracer. Please note: the test protocol is discussed frankly at the end of the article.

In the blue corner:

My Planet X Superlight Team road bike, a pretty standard sort of roadie creation, weighing in at around 8kg with SRAM Rival. If I had a fitting, I suspect the bars would come back a little, as I’m quite stretched out (although that should favour the bike’s performance in these sorts of tests).

In the red corner: 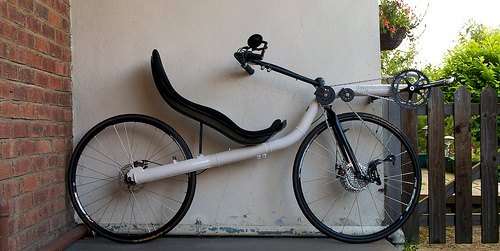 The RaptoBike Midracer, a FWD recumbent that is aimed towards the faster end of the all-round market (it’s not as much of a ‘racer’ on the recumbent spectrum as my DF is, for instance it can carry luggage). The Midracer weighs in at around 13kg.

Even at 150W, the RaptoBike is pulling away at 2.9mph – or to express it another way, 250W on my drop-bar road bike gives around the same speed as 150W on the recumbent. 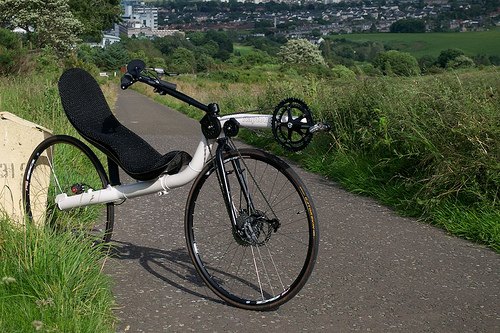 (For more on this conversion, I’ve got an upcoming article).

There are a huge number of caveats that need to be applied when mapping this result to real-life performance, including:

Note the major conclusion above: a RaptoBike Midracer at 150W will be going at the same speed as a drop-bar racer at 250W on the flat.

Imagine these two riders are racing each other neck-and-neck: the recumbent advantage cancelling out the power advantage of the road bike rider. What happens when they hit a hill?

Even at completely equal weight, at 250W versus 150W the upright will climb 1.67x as fast. That’s 16.7mph versus 10mph, leaving the recumbent rider in the dust.

The Raptobike adds 5.7% to my kerb weight versus the drop-bar bike, so it will climb 5.7% slower at any given wattage; that is to say, if a given wattage yields 10mph climbing on the DF it will yield 9.46mph on the recumbent.

In practice, recumbent riders notoriously experience slower climbing than this calculation would suggest, even when riding with uprights of nominally equal power. Some combination of the factors discussed in ‘caveats’ above will likely explain the difference.

I’m looking for indicative results for stock bikes for everyday riders only – this is not intended to be a scientifically defensible test for reasons of practicality (especially given that the bikes are often borrowed from the Laid Back showroom).

You’ll notice that the measurements top out at quite a modest 300W. As wattage increases I’m not capable of riding steadily for long enough that I feel comfortable with the errors introduced by factors such as the outdoor location (my one minute critical power is only 650-700W). I’d rather not show any figures than proudly display dodgy ones.

Finally, my main interest is ultra-distance riding. If I was measuring bikes for hour record attempts a lot of complications would ensue (how are riding positions optimised, etc).

I deliberately didn’t try to equalise the bikes in any way (for instance, by weighting the lighter bike to match the heavier one) to fit with the stated purpose of contrasting ‘stock’ bikes.

I wear the same clothing in each test – shorts and short sleeve cycling jersey plus road shoes.

Because we’re talking about long distance wattage, I rode the diamond-frame bike only on the hoods, because that’s the way that people ride about in the real world from my own observations.

There are ways to make both bikes faster (optimising the riding positions) but again – the purpose of this comparison is the performance of each bike for average riders doing average riding. If you were to go out for 200km on your road bike and stick in the drops the whole time (or use aerobars) then congratulations! You’re more efficient than my reference point!

There are many caveats with this sort of thing. First, I’m not doing each run multiple times and averaging the results. The surface is what any cyclist would call ‘flat’ but it won’t be truly 0 degrees level, and while the wind needs to be very still before I head out, it will still be present to some degree.