It’s easier lying down… but not by as much as you might think.

I’ve written before about the power advantage my High Baron recumbent enjoys over my normal road bike, but only in the context of a ~20 mile commute to work. I found that on average each recumbent mile cost 36.2kCal, versus 47.3kCal for each upright mile.

If that held out for a long brevet, it would be a significant advantage to the recumbent platform (a 3800kCal saving on a 600km brevet, for instance). But how comparable is my commute, an hour pretty much as fast as I can go, with an all-day or even a multi-day effort?

Now that power meters are getting a bit more commonplace, it’s easier to answer this question without going to heroic solo efforts in the name of science. 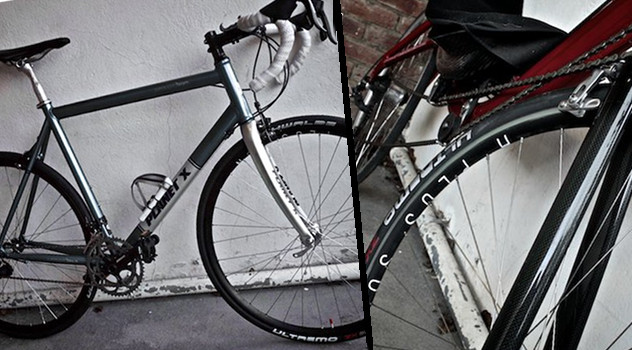 I rode the National 400 out of Dingwall this year, 256 miles (or ~400km! 😉 ) with around 14,000 feet (4270m) of ascent. Rather than ride the National 400 route twice on different bikes, instead I’m going to compare my power with another rider who did the course on the same day. The advantage of this is that weather etc. is exactly matched, but the danger is that energy use is proportional to weight (especially going uphill) and also the speed you travel at, and if these aren’t controlled, you might not get such useful data. In particular, if riders are drafting you may as well call the whole thing off!

Fortunately in this case our speeds were fairly closely matched and neither was drafting at all. I chose four segments between controls in the middle of the ride for comparison, as our average moving speeds were 16.496mph (recumbent) vs 16.507mph (upright), probably close enough! The total distance was 137.6 miles, the ascent 7,500 feet and the route profile between each control is as follows:

As you can see, it wasn’t the hilliest of routes, but there was a respectable amount of climbing. The first segment had a bit of a headwind, the others a tailwind. See the overall map view: 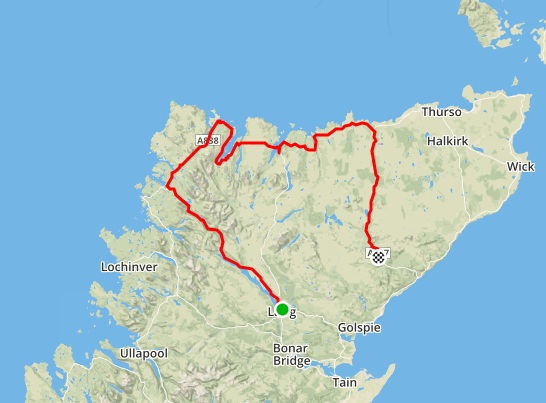 Before looking at energy used, it will be useful to calculate the respective weights. I looked at a fairly steep hill (7-8%) to broadly isolate the weight component. In this case the recumbent sustained 7.7mph for 247W, while the upright got 8mph for 239W. Knowing fairly accurately the all-up weight of one rider, we can crudely solve for the all-up weight of the other. In this case my own weight (inclusive of bike, spare clothes, tools, 2L of water) works out at roughly 6.5kg heavier than the rider on the upright.

Ideally we would have had a set of scales at the arrivée, but what can you do! This will be useful in a moment as a caveat on the overall comparison…

Knowing duration and average power we can calculate total energy consumption across each platform. See the table below for some of the detail:

Notwithstanding the weight penalty, the recumbent rider travelled at the same speed using 8.5% less energy.

Overall the recumbent used 5240kJ (36.9kJ per mile) whereas the upright used 5715kJ (40.27kJ per mile). The calculated efficiency for the recumbent is interestingly close to the 36.2kJ from my previous comparison, but the DF efficiency is much better than my commute’s 47.3kJ per mile. Quite a different result overall to the 24.5% saving on my commute – I suppose this highlights the difference between riding at 15mph and 20mph, which is my average speed for a commute, in terms of the recumbent’s aero advantage.

(I’ll just take this opportunity to point out that my recumbent, pictured below, didn’t weigh 6.5kg more than the upright, although it contributes a couple of kilos for sure. If I’m honest, it’s probably mostly the rider who was a bit more portly!) 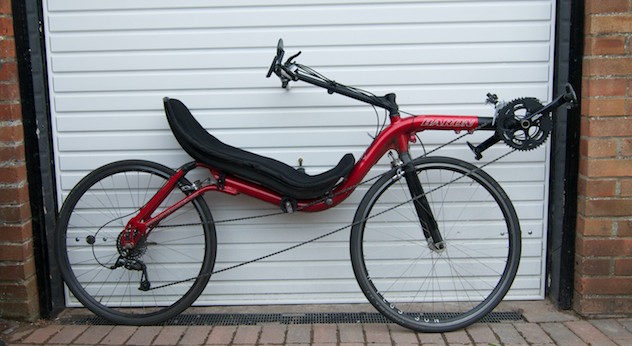 When you break it down a bit, as expected the relatively flat stage over the watershed from Lairg to Achfary (roughly 30 miles, 800 feet of climbing, into the wind) shows a dramatically better result for the recumbent than the other stages (hillier, no headwind). I was travelling at 18.4mph while the upright rider made 16.7mph – yet I used just 885kJ to get between controls, compared to 1091kJ for the upright – an increase of 23% in energy spent AND a reduction in 1.7mph average speed…

Anyway, that’s quite enough geeking out on power data for one day. Hopefully this is thought-provoking – please drop a comment below if you have any feedback!