It’s no secret that the people of Scotland have big issues with their health, pollution and congestion.

Bus lanes aren’t sexy but they are important. Glasgow is busy boosting its bus lane network so that more of it operates all day. You can see the logic, as this makes it possible to travel around the city without worrying about a lane cutting in or out of action while you’re en-route.

Bus lanes massively reduce hazardous parking which is great for everyone – pedestrians, other drivers, public transport and cyclists alike. Having a lane set aside from breakneck traffic makes walking along the pavement much nicer, and is essential if we want people to get around by bike and refuse to build cycle facilities (using the bus lanes as justification).

So far, so good? Well, that’s until you discover that the council is slashing operating times. In fact:

Against this background you may raise an eyebrow to learn that Edinburgh is planning to massively downgrade its bus lane network. If all goes according to plan, 90% of the bus lane network will be in action for a miserly four and a half hours a day, and switched off for the other ~20.

This means anyone relying on a bus lane to get around outside the peak rush hour is getting a good kick in the teeth. In particular, it means that 90% of Edinburgh’s bus lanes are going to be switched off all weekend and for school pick up journeys: 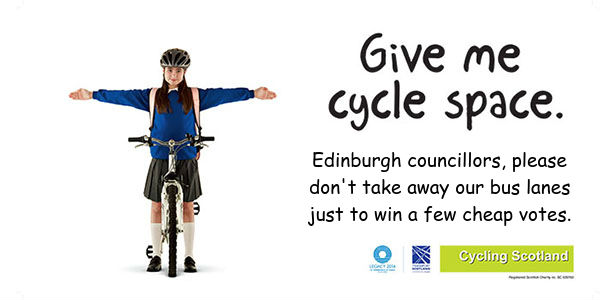 Cycling to school, huh? Well, not if you were planning to use a bus lane.

The worst thing about this proposal is that it has no clear justification – despite significant costs and the potential for long-term damage to the city’s bus network.

Some officials (and councillors) are claiming reduced driver confusion from simplified operating times – instead of having some all-day bus lanes and some rush hour ones, they will all be the same. But this sounds like great justification to turn all bus lanes into all-day lanes (in the style of Glasgow) – it’s actually being used to slash operating hours from sixty six per week down to just over twenty two.

Sounds like a major policy shift to me and one which is very poorly aligned with the council’s published goals and some of its legal responsibilities.

As a driver, I have to admit that I find it very easy to handle bus lane operating hours but if some of my fellow drivers aren’t quite so smart, surely the rest of us can be saved from their crippling confusion without neutering valuable transport infrastructure?

The report to the Transport Committee (which you can read here) is seriously compromised on several important points. Here are a couple of highlights:

[Ineffective bus lanes are] locations where buses, taxis and cyclists receive marginal or no advantage and which also cause localised congestion (solution – remove bus lane)

Seems to be a contradiction in terms, doesn’t it? A bus lane which is to be removed because there is a large demand from private vehicles to occupy it is, by definition, one which offers significant amenity to the buses, taxis and cyclists who are currently benefiting from their own space.

The surveys showed that, at most of these locations, there was little or no delay to buses during off-peak periods; that is between 9:30am and 4:00pm, Monday to Friday. This appears to indicate that all-day bus lanes, offer little additional operational benefit to buses, compared to peak periods lanes, under normal traffic conditions.

At face value this looks like a claim that because there is no delay to buses in all-day bus lanes in the middle of the day, all day bus lanes are of little benefit. Yes, I also find it hard to understand that logic – the only possible way to observe a delay is to look at roads where people are allowed to block the buses, not the ones where they aren’t.

In fact, not only is it hard to find a single policy that this proposal is aligned with, it’s easy to find many different policies that it compromises.

For instance, it’s the council’s stated policy to reduce private car use (from 43% to 31% by 2020) – it’s unclear how switching off bus lanes during the day will help convert people to taking the bus, walking, or cycling – either in terms of the direct impact of the lanes on individual journeys or the wider message it sends to the people living here.

I could go on but there’s not much point.

I’ve written to object to the experimental traffic orders making this happen – you can still do this until February 18th, see here for instructions.