Just when I began to think that it might be possible to carry absolutely anything by trailer, I think I might have encountered the exception that proves the rule (for the stock Y-Frame trailer, at least): 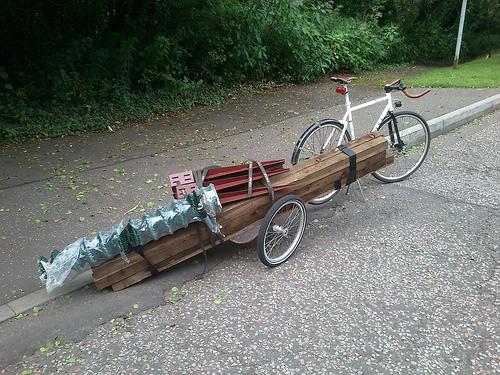 The posts, fixings and metalwork for 10m of chain-link fence? Not so much…

Although I did actually manage this, it was pretty tenuous… the 2300mm posts were supported OK by the tow arm, but the chain link itself had to ride out back, throwing the weight right off (with a longer towing arm you’d be able to put this all on comfortably centred on the axle, not hanging off the back of it).

I then had a ton of awkward spikes to try and lash down in such a way that they wouldn’t fly off and kill small children or worse, cause a motorist to be slightly delayed.

All in all, quite a tricky loadout. An extended hitch is needed really to get the axles under the weight, then perhaps it would be possible to put the rest in a box that lashed down on top.

Don’t think it set a weight record (quite) although I couldn’t lift all the wood in one go, so it must be fairly burly.